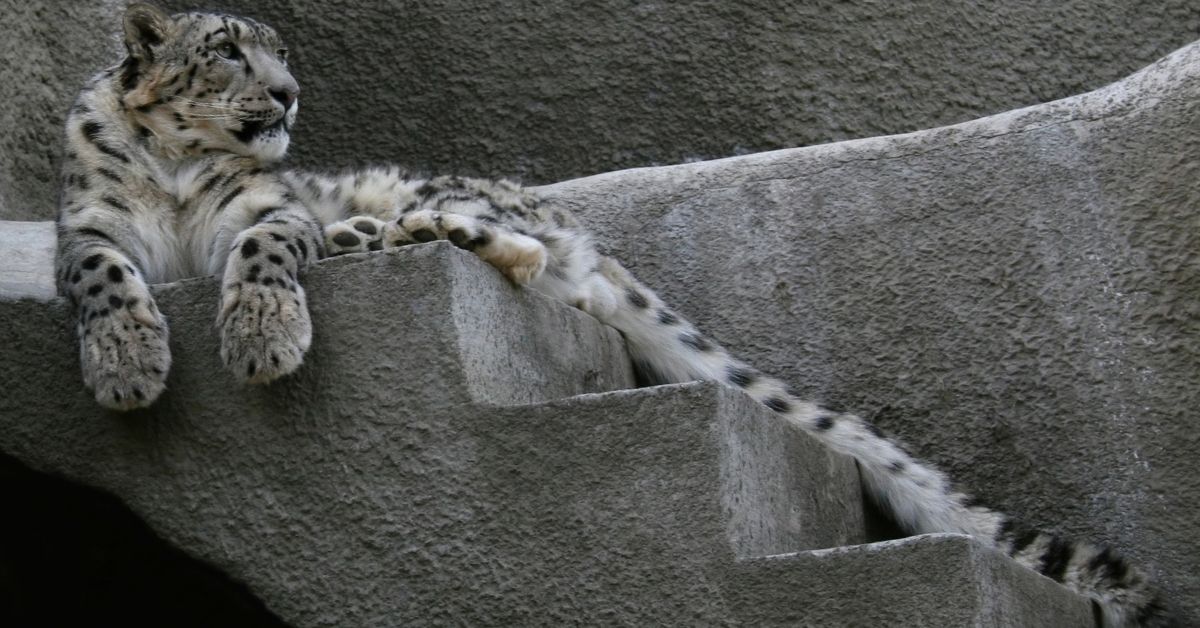 Snow leopards are beautiful and unique animals with incredibly long tails. It can be as long as one meter, which is often longer than the snow leopard itself.

Their tails are one of the features that makes them so special and stand out among other animals. Their tails are longer than other large cats. It provides them with a great many benefits.

The tail of a snow leopard is not similar to other cats. It is just about the length of their body; however, some leopards have a tail that is twice their body length.

Their body is about 48 cm to 60 cm, and their tail is roughly about 80 cm to 100 cm. It is beautiful to see because it is fluffy and thick. One of the reasons the tail is thick and fluffy is to provide warmth in the cold climate where they live.

Despite the snow leopard’s tail being so thick, it is also incredibly flexible. It is believed that one of the reasons the leopard has a long tail is that it is part of its adaption to incredibly cold habitats.

How Does a Snow Leopard’s Tail Help It?

The snow leopard’s tail is an important organ for them. It has helped them survive the elements and their environment over time. There are a large number of benefits that a tail provides to the snow leopard. Some of the benefits include:

The snow leopard lives at higher altitudes. The elevations in which they live are about 3,000 m to 4,500 m. They prefer to be in an environment that is steep, rocky, and broken terrain.

Snow leopards have short forelimbs, long hind legs, and a long bushy tail. All of these features help the leopard remain balanced on steep rocks on the Himalayan mountain range where they can be found.

In addition, they use their tails as a counterbalance which allows them the ability to stay agile in a rugged area thanks to their tails. The tail helps the leopard maintain balance the same way a tight rope walker uses a stick to remain balanced on the rope.

Not only does a leopard use its tail to maintain balance while climbing rocks, but it also helps while a leopard jumps and leaps over crevices or other rocky areas. The tail helps when the leopard is running after prey.

When the prey is not running in a straight line, the tail allows the leopard move quickly. Much of the leopard’s prey runs in a haphazard way, and their tail assists the leopard in doing the same.

If the leopard’s tail were short, it would not be able to run in a similar way to the prey. Their tails become useful when hunting and running.

Protection from the Weather

A snow leopard has adapted well to its cold environment. They have a large amount of fur that keeps them insulated and warm in extremely cold weather. Their fur is 5 cm on the back and sides and 12 cm on their stomach.

The snow leopard’s tail helps to provide protection against harsh weather. The leopard wraps their tail around them when they are resting or sleeping to keep them warm. They use it as a blanket or muffler to provide additional warmth.

There are sensitive parts on the body of a snow leopard, and these parts of the body are susceptible to cold weather. Even when the leopard feels a cool breeze, it will wrap its tail around its body.

There is no scientific reason why they put their tails in their mouths. There are some that believe it is just the leopard being playful. Some say they are doing it when they are bored and want a plaything. There are even pictures where you see leopards with their mother’s tail in their mouths.

Some believe that leopards have their tails in their mouths to keep their noses covered. They believe this is an attempt by snow leopards to keep themselves warm.

Snow leopards use their tails to communicate with their cubs with a simple twitch of their tail. They are using it to express affection.

When there is a threat or perceived threat, a snow leopard will use their tail to guide their cubs in the direction in which they want them to go.

A snow leopard’s tail plays a role in the mating process. A female snow leopard will present herself to a male during the breeding season by raising her tail when walking in front of the male.

Do Snow Leopards Store Fat in their Tails?

Yes, they do. One of the reasons why a snow leopard has a thick tail is because of how much fat it stores. The thick tail is also covered with fur, which allows them to use their tail as a blanket.

A snow leopard tail stores fat to help get the leopard through lean times when there is not enough food to eat.

Does a Snow Leopard Use its Tail to Express Emotion?

Snow leopards are known to show their feelings with their tails. With just a swift flick of their tail, you can tell their mood. When a snow leopard is irritated, you will see it raise its tail high and flick it.

When a snow leopard is hunting prey and gives up the hunt, it will raise its tail and emit a sound as if to wave the white flag. This indicates to the prey that the hunt is over.

Snow leopards use their tales for many benefits. Their tail is long so they can keep themselves warm, alert other animals of their mood, or just be playful.