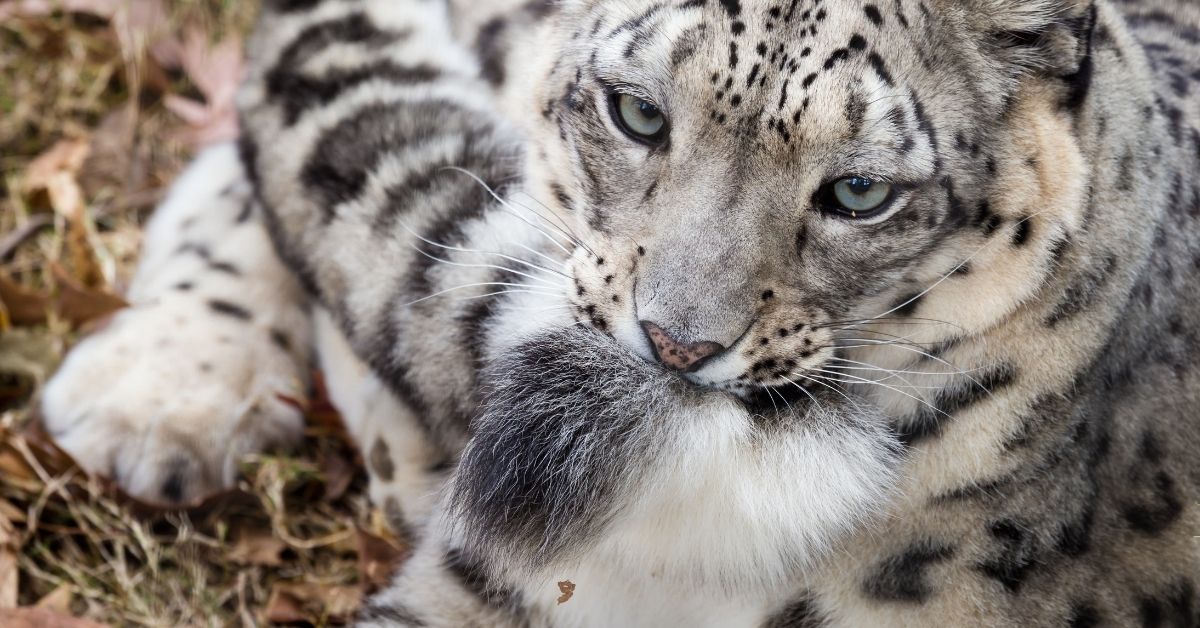 Snow leopards are among some of the most majestic and rare sights to see in the animal kingdom. While they are known to be ferocious predators, they are actually said to behave similarly to domestic cats.

They are also extremely beautiful to look at and have gained quite the popularity online due to their particular habit of biting their own tails.

While people clamor over images of this adorable little phenomenon, one does wonder – What is the reason behind the snow leopard biting its tail?

The most popular theory as to why snow leopards bite their tails is to keep their noses warm in harsh, cold environments.

Snow Leopards, from the name itself, can be found in areas with cold environments and rough, snowy terrains. While their bodies are well insulated against the cold environments, their nose and mouth are said to get cold thus leading them to bite their thick, furry tails.

Their tails then ask as a sort of insulator or furry little mask to keep their snouts warm against the cool winter wind and prevent frostbite.

Snow Leopards Biting Their Tails as a Form of Play

Another, more plausible, theory is that snow leopards bite their tails as a form of play.

Snow leopards, despite their intimidating appearance, are said to behave like domestic cats even when in the wild. And like domestic cats, they often get bored and try to find different ways to amuse themselves.

Their tails, due to their length and appearance, can sort of appear as a natural teaser toy. In fact, images of them biting tails, either their own or others’, are usually taken in the middle of play.

Biting Their Tails due to Stress

One thing that people have noticed is that snow leopards have a tendency to pop their tails in their mouths when they are exposed to stressful factors and environments. This could either be interpreted as their own form of a nervous tick or a way of telling others that they are stressed.

However, the more popular theory is that they do it as a form of stress relief. Simply put, they do it because it feels good for them and allows them to feel a bit more relaxed.

Passing on Tail Biting as a Behavioral Trait

Tail biting is also said to have been sort of passed on and adapted by snow leopards. Apparently, younger generations of snow leopards, especially those born in captivity, have adapted this habit by observing the older cats.

Do Snow Leopards Bite Their Tails in the Wild?

There is some debate as to whether snow leopards really do bite their tails in the wild or if it’s just something they learned in captivity.

Some people say that the habit was born out of extreme boredom in captivity due to the lack of space to roam around and perform other activities that it would normally do in the wild. So, it invented this sort of game of biting its own tail for amusement. This is supported by the lack of images of the snow leopard biting its tail in the wild.

The lack of images, however, can be attributed to the difficulty in timing when capturing images of the animal in its natural habitat.

It is possible that the snow leopard does bite its tail outside captivity but has not had its image captured due to the rarity in snow leopard sightings in the wild as attributed to its decreasing population.

This peculiar little tail biting habit that snow leopards have is the one thing that separates it from other wild cats. It also reminds us of the connection that these ferocious felines have with our own little domestic cats.

The snow leopard is certainly a rare sight to see nowadays due to its dwindling population attributed to illegal hunting and their tendency to travel solo. This then leads to insufficient observational evidence as to why they really bite their tails.

While the reason behind this uncommon practice between snow leopards is still uncertain, one thing is for sure: it looks absolutely adorable and makes for great pictures.