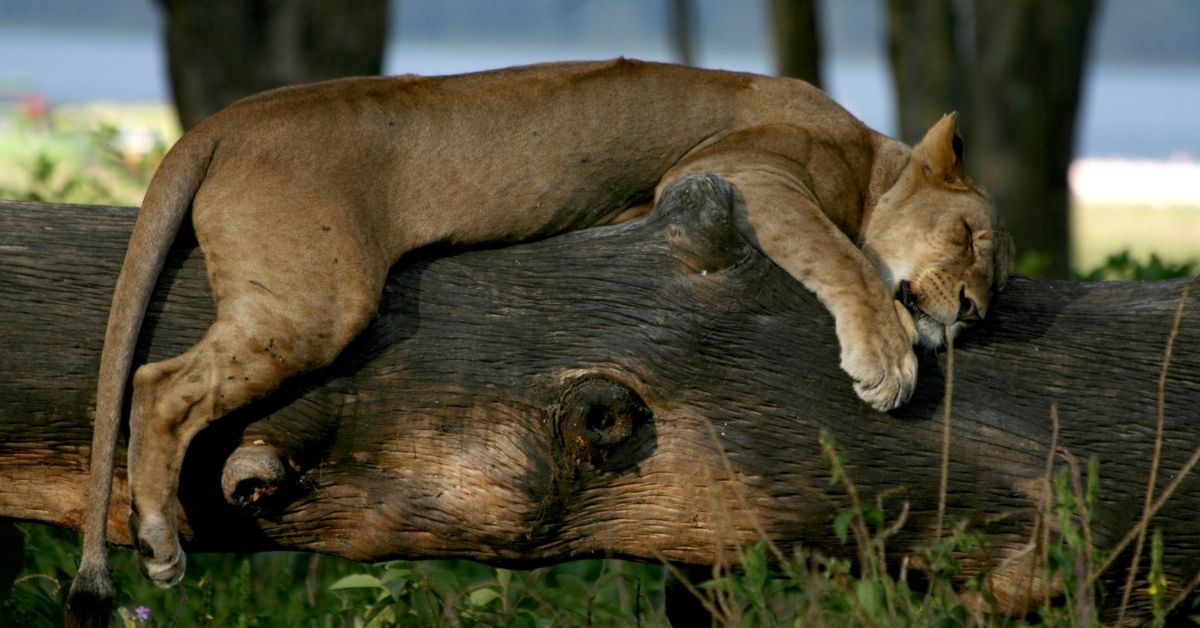 There are very few animals in the African bush that hibernate, and lions are not one of them. There are a few reasons why lions don’t hibernate and we’re going to go through them below.

Animals hibernate to survive harsh winters and a lack of food. Lions being they top the food chain in their habitat, and living in favorable weather conditions have no need to hibernate.

No, lions don’t hibernate. The main reasons why lions do not hibernate is because of the hot climate, the abundance of food year-round, the risk of being attacked, and the fact that they can’t go without food.

Lions are the only felines that live in social groups, called prides. Each pride has its territory that contains at least one source of water and an unlimited source of food.

To keep the territory and the pride fed, all lions need to put in a lot of work all the time. Because prides are usually big (up to 40 lions) and the cubs are always the last to eat, the hunting needs to be frequent enough to feed everyone sufficiently.

Lions never hibernate, given the constant need to be active and a few other reasons.

Hibernation is a way for animals to survive harsh conditions while preserving their energy. In the wild, lions don’t have a need for hibernation.

Fortunately for lions, their territories happen to be in the warmer parts of the earth, so they never experience cold winters.

The majority of lions live in sub-Saharan Africa, and a small group also resides in Western India. Both places have warm to hot climates, where there is no snowfall and temperatures never drop below 48F (in India) and 68F (in Africa).

What this means is that lions don’t have to worry about bad weather. Their coats are sufficient enough to feel comfortable during the winter months, and therefore they don’t need to hibernate to survive until the next season comes around.

On the other hand, the hot climate doesn’t make it easy to fall asleep for half a year either. Unlike humans, lions can’t sweat, and the only way they can avoid overheating is by panting. They often lie down on their backs, exposing their soft belly skin to let the air cool them down.

If lions were to sleep for months they would not be able to regulate their temperature and risk overheating.

Another and pronounced disadvantage of a hot climate is the high temperature. Lions, like other mammals, need to hydrate to stay alive, especially in higher temperatures.

In the most extreme case, a lion can survive four days without water, but after that, there is a considerable risk of health deterioration and subsequently death.

Hibernating seems impossible for lions living in those conditions. Instead of helping them survive, it could put them in mortal danger.

Lions inhabit climates that allow plant growth on a nearly yearly basis. This means that all the herbivores lions prey on have a sufficient amount of food throughout the year. That, in turn, means most of the time, lions don’t have to suffer from the lack of food themselves.

When the plants are getting scarcer in the dry and hot months, ungulates migrate to better pastures. Dozens of different species travel through the lion territories in thousands, searching for food.

The big migration of wildebeests, zebras, and antelopes presents a perfect opportunity for lions to feed, rendering hibernation unnecessary for lions.

Even though very territorial, the pride sometimes travels after their prey to greener pastures. They usually assume a new territory where the food source is more abundant. This traveling routine is not frequent but sometimes happens during slim years. Yearly access to food makes hibernating unnecessary.

Lions can’t hibernate because they usually need to eat every day. Although they can survive without food for up to two weeks in very extreme situations, it is not healthy for them to do so. After that time, a lion’s strength starts to diminish, making it difficult to hunt.

In very extreme situations, lions who go without food for about a month cannot muster enough strength in their bite to strangle an animal.

Normally, a lion pride sets out for a big game hunt every 3 – 4 days to provide enough nutrition to every member. A grown lion needs around 5 kg of meat, and after a fasting period, it can consume up to 50 kg in one sitting.

Apart from the big game, lions also hunt for small creatures, like mice and rabbits, to supplement their diet between big hunts.

Considering the constant need for food, hibernating would more than likely kill a lion.

Hibernation is a method some animals choose to survive periods of lack of food and an unforgiving climate. During that time, animals don’t need food or water, and their heartbeat and breathing slow down. Hibernating animals can reduce their metabolism to around 25% of basal rates.

Evolution didn’t prepare lions to hibernate like bears. While bears living in colder climates can go to sleep for 4 – 7 months a year, and slow down their heart rate from 55 to 9 beats per minute, lions can’t do that. Living in a warmer climate means staying awake a whole year to feed and maintain life functions.

Hibernating animals have one rather important task to do before they go to sleep for months at a time. They need to find a safe place where predators and other creatures won’t disturb them.

While small hibernating animals can hide under rocks or in holes in the ground or on a tree, bigger animals don’t have such comfort unless they are an apex predator, like bears, and are not afraid of other creatures roaming around their habitat.

Lions don’t have that privilege. While they are on top of the food chain in their habitat, they are not alone. Lions share their habitat with other predators like leopards, hyenas, cheetahs, or wild dogs.

Although neither actively hunts lions for food, there is no love lost between them. They can kill a lion, especially if it’s sleeping.

In habitats where they live, lions would have a difficult time finding a good hiding spot to house whole pride. We could only imagine that 20 lions sleeping together for a few months without protection in savanna would be an easy target to a pack of hyenas.

Evolution didn’t prepare lions for hibernation. They stay awake the whole year, hunting for their food and protecting their territory. As pack animals, lions share duties between getting food and standing guard, and there is no time for a few months of hibernation in that schedule.

The habitat where lions live also isn’t the most suitable for prolonged slumber. The heat and predators wage against falling asleep. Lions’ physique is another disadvantage. Lions are not made for hibernation due to their constant need for water and high calories intake.

While hibernating, lions could die of dehydration, heat stroke, starvation, or they could be eaten by any other predator that shares their habitat. Hibernation is simply not in the cards for lions.