Why Do Elephants Throw Dirt on Themselves? 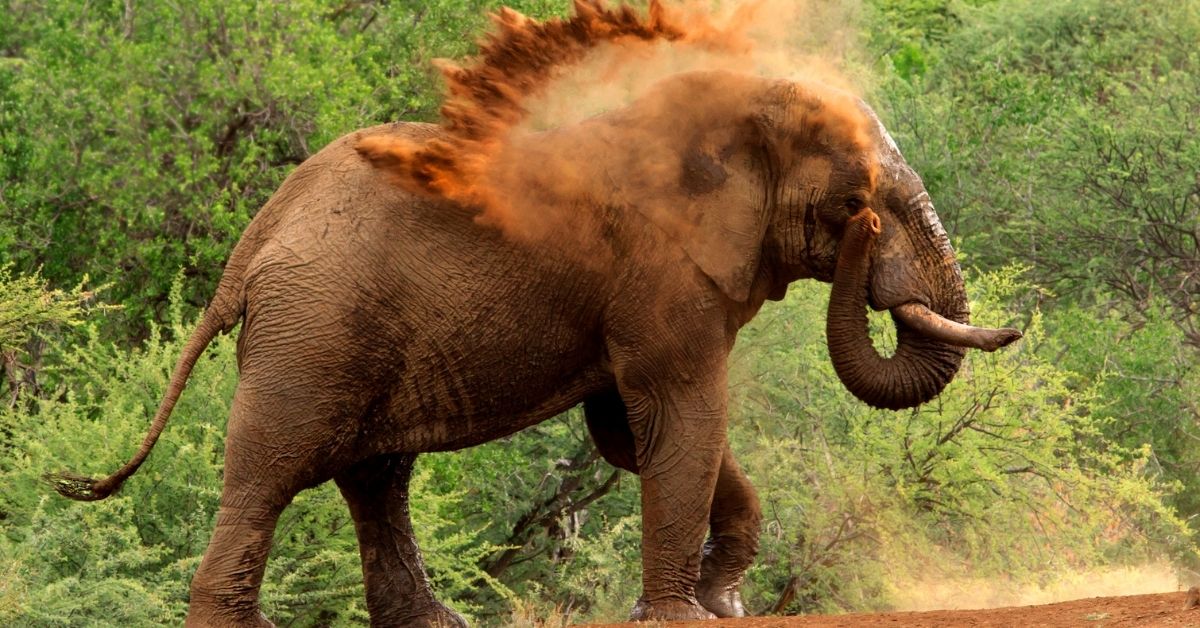 When you think about elephants, you probably think of hot, dry savannah. You might be picturing a watering hole where thirsty animals gather to drink.

If you’ve seen elephants in the wild or at a zoo, you may have seen one of them pick up a few trunkfuls of soil or sand and throw it over their back.

Some elephants, especially younger ones, will also roll around on the ground, trying to cover themselves in as much dirt and dust as possible. This behavior is known as dust bathing. But why do elephants like to take baths in dirt?

Why do Elephants Throw Dirt on Themselves?

Elephant skin can be up to 2.5cm (1 inch) thick. Despite this, their skin is very sensitive, especially to UV rays and heat from the sun.

Elephants can’t sweat as they don’t have sweat glands, so they need to find other ways of keeping themselves cool in the hot climates where they live. One of the ways they can do this is by dust bathing.

Elephants will scoop up dust and dirt from the ground with their trunks, and throw it over their backs, creating a large dust cloud in the process!

Dust bathing is often seen after heavy rain, or when elephants are bathing in water. The dirt mixes with the water and forms a layer of mud on their skin.

This mud dries into a crust and acts like sunscreen, helping to protect elephants from the sun’s UV rays. Layers of dried mud also help to keep elephants from becoming too hot, as the mud also protects against the sun’s heat.

When do Elephants Dust Bathe?

Elephants are most likely to mud bathe or dust bathe during the hot/dry season, and to look for water to splash in during the middle of the day, as this is one of the most effective ways for them to keep cool.

It’s important for researchers to know how elephants cope with heat. Conservationists working with wild elephants need to know if they will move from place to place more as temperatures rise, especially if this will put herds of elephants in close contact with human settlements, which can be dangerous for both humans and elephants.

Understanding how elephants keep cool is also important to ensure that captive elephants (such as those living in zoos or wildlife parks) are kept comfortable and healthy. One of the ways researchers monitor elephant temperatures is by getting them to swallow tiny thermometers!

Elephants Use Dirt to Keep Themselves Clean

Keeping cool isn’t the only reason elephants dust bathe. With their wrinkly skin, elephants need to stay clean and free from parasites and biting insects, as well as accumulated dirt that may cause irritation.

Throwing dirt on themselves helps to clean off any bugs they might have collected during the day.

Sand and gravel particles in the dirt also act like an exfoliant, helping the elephant shed old layers of dead skin. Although it may seem counterintuitive, dust bathing can actually be a very effective way for an elephant to stay clean and healthy!

Dust Bathing is a Social Activity Too

Dusting can also be a social behavior. Elephants are incredibly social and live together in matrilineal (connected via the female line) families, led by the senior matriarch of the herd, usually the oldest female.

Occasionally, several families of elephants will join together during the dry season to form a clan, to protect a wider range of territories from other clans and family groups.

Young elephants (known as calves) stay close to their mothers and can often be seen copying their behavior. An elephant calf will often dust bathe at the same time as its mother.

Family groups will often modify their behavior to help the youngest members of the herd – groups with young calves will stay in the shade and rest for longer when temperatures are hotter.

Elephants will often dust bathe in groups. Captive herds have been seen heading to a favorite sandy spot in their enclosure to dust bathe as a group – maybe it’s a way for elephants to spend quality time together?

Dirt isn’t the only substance elephants have been seen wearing – a study on Asian elephants at Chester Zoo noted that they would often throw grass, hay and branches over their backs as well as sand and dirt.

Sometimes, elephants might dust bathe for different reasons than keeping cool – elephants have been seen throwing dirt over themselves during conflicts or arguments. This might be done as a way to divert attention from the fight and stop the conflict from getting worse.

Dust bathing can have a big effect on the habitats elephants live in, too. Elephants will often dig with their front feet to scrape up enough loose dirt for their dust baths and this can leave big holes in the ground.

When elephants dig at the edge of watering holes, it can make these holes larger, creating more space for other animals to come and drink.

Are There Any Other Animals That Dust Bathe?

Elephants aren’t the only animals to use dirt to keep clean and cool. Chinchillas, degus, horses, pigs, llamas and chickens are just a few of the other species known to enjoy a dust bath.

Some of them even use dust bathing as a way to mark their territories and communicate with each other.

Elephants throw dirt on themselves for many reasons, from heat protection to cleanliness as well as social activities.

The main reason elephants throw dirt on themselves is for protection from heat and UV rays, dirt to an elephant is like a natural sunscreen.

Elephants will also throw things other than dirt over themselves, they use hay, grass, branches, etc. This type of behavior is for social activity and not to protect against heat.