Why Are Polar Bears Green? (Explained) 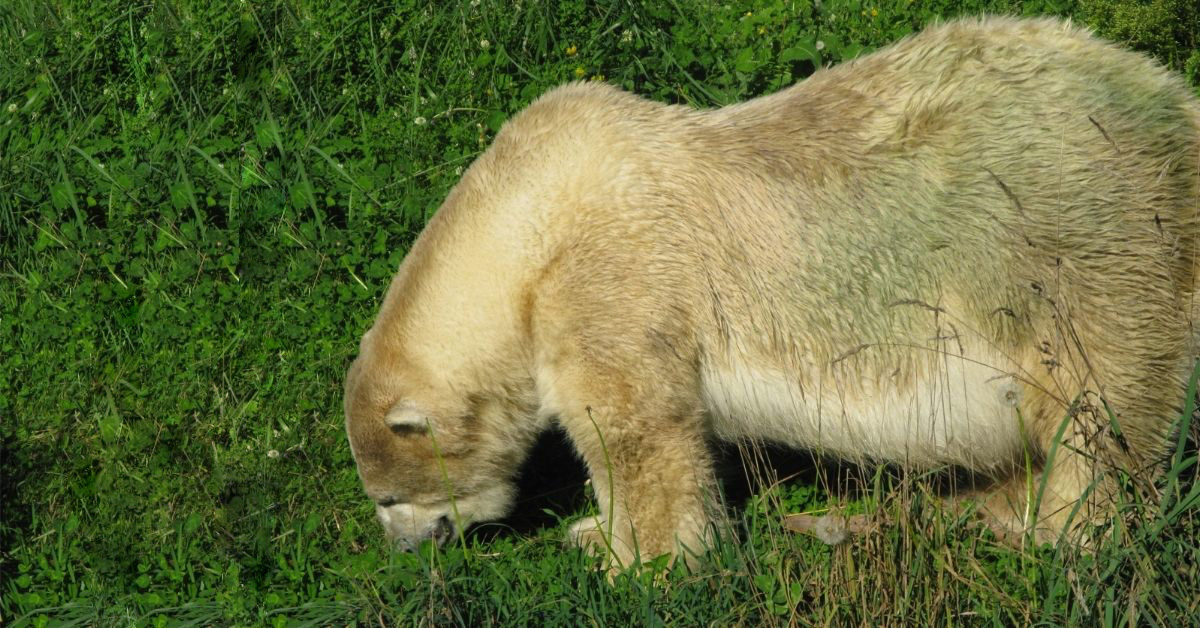 Polar bears are set apart not only by their unusual climate but also by their pristine, white fur. This fur allows polar bears to blend into their snowy surroundings and gives them a look that is entirely their own.

However, white is not the only color polar bears sport. They can also sometimes exhibit tints of green in their fur. How is that?

Polar bears get their unusual glowing green color due to the adherence and subsequent algae growth in their fur.

Green polar bears are often only found among those living in captivity, where algae can sometimes coat its surroundings.

These algae can get into the bear’s fur and grow not only ON the fur, but also INSIDE the fur.

You see, bear hair strands are not like common hair strands. Instead of a solid strand of hair, their fur strands have a cavity in the center.

This makes these hairs susceptible to color changes due to environmental factors or diet.

Polar bears living in captivity can sometimes get mini abrasions in their fur due to their pens’ concrete or other materials. This opens up the hair and makes it possible for algae to grow on and in the bear’s fur.

Algae possesses chlorophyll – the pigment that is responsible for their green coloring. In turn, the same pigment gives the polar bear its green tint.

How do Polar Bears Get Algae?

Algae grow best in the warmer, muggier climates where some polar bears in captivity can be found, specifically in moist surroundings.

Polar bears can get algae through the moisture in the air and surrounding walls and floors of the pens in which they live.

However, those kept in zoos can often get them through swimming holes that are not cleaned as often as they should.

Are there Green Polar Bears in the Wild?

Green polar bears only exist in captivity. This is because algae need a warmer climate to survive and grow in surroundings and the polar bear’s fur.

Polar bears live in the Arctic, which has a naturally cold climate all year round. While algae are known for their resilience and persistence, cold temperature inhibits their ability to grow in tremendous amounts.

This, in turn, makes it difficult for them to expand on the polar bear’s fur enough to color it green.

Despite zoos’ and other polar bear shelters’ best efforts to try and mimic this cool bear’s natural icy habitat, these institutions tend to have warmer climates.

These climates are ideal for the algae’s growth and propagation.

Polar bears turning green is unusual but not much cause for alarm. These polar bears can regain their pristine, white coats with little to no problem.

Algae is just a contaminant that can be easily washed off. Special solutions such as salt baths can easily take the algae and its green coloring out and restore the polar bear’s actual color once again.

What is the Polar Bear’s True Fur Color?

While they are extremely popular for their clean, snowy white fur, polar bears aren’t white. Many people don’t know that the polar bear’s fur is translucent.

These transparent, hollow strands of fur appear white because of the way the light hits them.

Much like how ice and other transparent items can appear white, these strands of fur reflect light in many different directions causing them to appear white.

This also masks the fact that their skin is black underneath. This black skin allows them to absorb heat better and survive colder climates with no problem.

Can Polar Bears Be Different Colors?

Interestingly enough, white and green are not the only colors the polar bear can be. They can also be spotted to sport yellow, grey, and even reddish coats.

Polar bears can sometimes exhibit yellow coats due to their diet—specifically, the consumption of seals. Seals have oils that can tinge the polar bear’s translucent strands yellow, giving them a slight tint.

Grey polar bears are brought about by their ability to reflect the light. Sometimes, specifically during cloudy days, the most prominent color in the sky is grey. This light is reflected by the polar bear’s fur and makes them appear grey, as well.

Much like how grey polar bears get their color from the sky, polar bears can also reflect the colors of the sunset, giving them a unique appearance. They reflect the sunset lighting’s bright oranges and reds bathing them in the most beautiful reddish-orange glow.

If you completely shave a polar bear, you’d probably be surprised to find out that this bear’s skin is black. This black skin allows these giant bears to absorb the heat of the sun better and will enable them to survive in the coldest climates.

The way polar bear fur strands are built allows them to be a kaleidoscope of different colors. Their reflective, translucent fur is truly a marvel that can house algae that gives the polar bear its unusual green color.

Its ability to reflect light is also responsible for its trademark white color and a myriad of other shocking and amazing colors.