What Animals Prey On and Eat Lions? 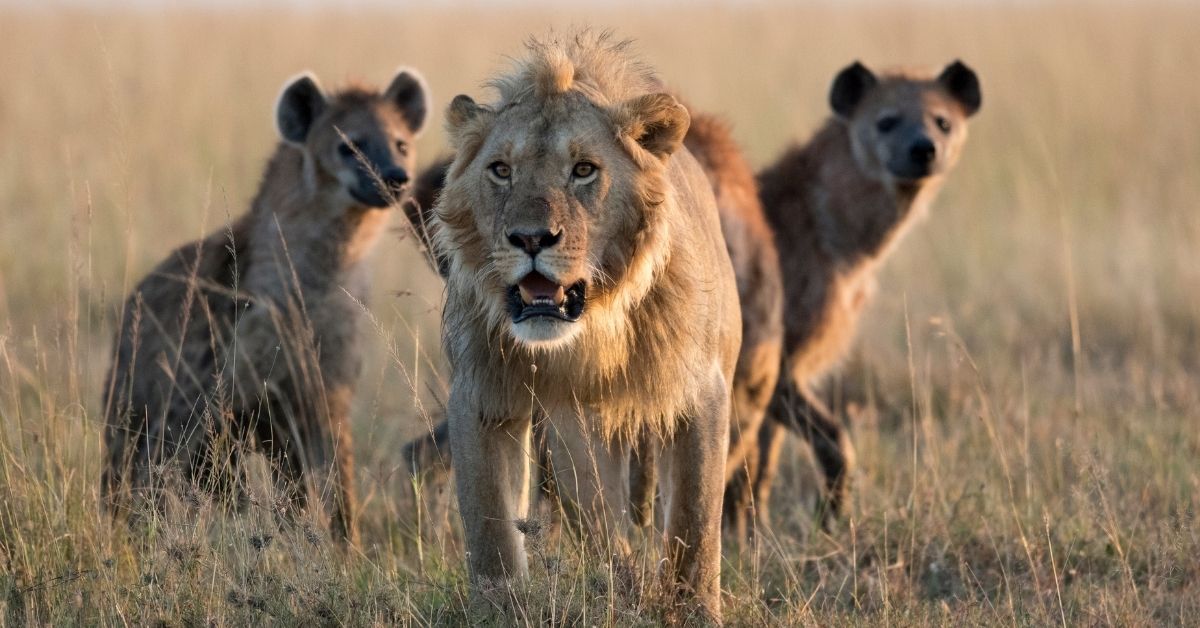 When we think of lions, we think of a fearsome predator, the king of the jungle. But did you know that there are animals out there that will eat a lion or even prey on them in some instances?

Animals That Prey on Lions

It’s common knowledge that lions are the king of the jungle, and there are not many predators that can match a lion pound for pound. However, some animals Do Prey On Lions.

No animal actively preys on fully grown lions, but many animals prey on lion cubs.

Perhaps the most well-known rival of lions is hyenas. The most battles seen on the African plains are that of lions and hyenas.

While a single hyena vs a single lion is no contest, hyenas have ways of making up the odds by traveling in large packs, sometimes numbering over 100 hundred hyenas.

Packs this size can not only fight off a single lion but have been known to take on whole prides and win.

However, we must note that the first thing on a hyenas mind is food, and they don’t actively hunt lions or even lion cubs for that matter, yet hyenas kill more lions than any other animal.

These deaths are a product of collateral damage; this is due to territory battles as well as the hyena’s unnerving ability to scavenge food from any animal, even the king of the jungle.

It’s strange to think of a leopard as a predator to a lion. A fully grown leopard only weighs up to 176 pounds, whereas a fully grown lion can weigh up to 420 pounds. Even a female lion weighs more than a male leopard.

However, leopards will actively prey on lion cubs. Lions are direct competitors to leopards in the food chain and often steal a leopard’s kill. Lions also account for up to 70% of leopard cub deaths.

For this reason, to reduce competition and save their offspring, leopards will often seek out and kill lions’ cubs in their area.

The leopard will kill the cubs and make a meal from it; they will carry the dead cub up a tree to avoid retaliation from the lions. Once safely up a tree and out of harm’s way, the leopard will feed on the dead lion cub.

Lions usually try to avoid traveling in water as they know what lurks beneath, Crocodiles.

Crocodiles are ambush predators, and they don’t discriminate. A crocodile will kill and eat anything that comes across its path.

While the crocodile can readily kill a lion in the water, the opposite is true outside of the water.

Often a crocodile will try and steal a carcass from a lion or try and attack a lion cub. These instances are rare because the crocodiles are no match for lions on land in most cases.

In the water, the crocodile is much much agile and could quickly drown a lion and rip it apart by performing its trademark move, the death roll.

Like hyenas, African wild dogs are natural enemies of lions and have strength in numbers.

A single African wild dog has no chance against a lion, but due to the size of the packs, they have the strength to take on lone female lions.

Lions frequently chase wild dogs off their kill, leaving them to go hungry, so when given the opportunity, African wild dogs will often kill lion cubs to reduce competition and for food.

However, African wild dogs rarely take on a male lion or any more than one lion.

Perhaps one of the biggest predators of lions is humans. Poaching and trophy hunting is the main reason for the demise of whole lion prides.

It’s estimated that up to 600 lions are killed because of trophy hunting, and 64 of those deaths are at the hands of American Trophy Hunters, according to the DODO.

However, lions are not only killed by the hands of humans because of trophy hunting. Lions are often killed in snares that are targeted for other animals.

While not many animals will hunt or prey on lions, there are a plethora of creatures that will eat a dead lion.

The most famous scavenger of them all, the vulture, will happily chow down on a lion carcass.

Vultures only feed on dead animals and are specially equipped to do so.

They have excellent eyesight and a superb sense of smell to help them find a lion carcass or that from any other animal while high in the sky.

Usually, after a kill, vultures are the first scavengers on the scene.

Jackals will also happily feed on lion carcasses also, this presents a welcome change from feeding on small mammals.

While jackals are not true scavengers like vultures, they can be considered opportunistic omnivores. They will not pass up a free meal, be that of a lion or any other animal.

Perhaps a lesser-known scavenger, the marabou stork feeds on many foods, including carrion.

While lion kills attract maribou storks, a dead lion will attract it just as much.

There are many other animals and creatures that will eat a lion, but not many animals that will kill a lion.

Do Lions Eat Other Lions?

One predator of lions often overlooked is other lions. Male lions that takeover another pride will nearly always kill the prides’ cubs. Lions don’t want to rear cubs that are not of their own DNA.

Another reason male lions will kill the cubs is that female lions are not receptive when they have cubs, and by killing the cubs, the female lion will become receptive again, allowing the new male of the pride the opportunity to procreate and pass on his genes.

Lions are the most feared predator of Africa, and not many animals dare to take on a lion. However, because of their fearsome reputation, many animals will kill lion cubs to reduce competition.

Humans are the number one killer of lions and account for up to 600 lion deaths each year.

Hyenas are a lion’s biggest rival and account for more scuffles with lions than any other animal.