Snakes That Swim on Top of the Water 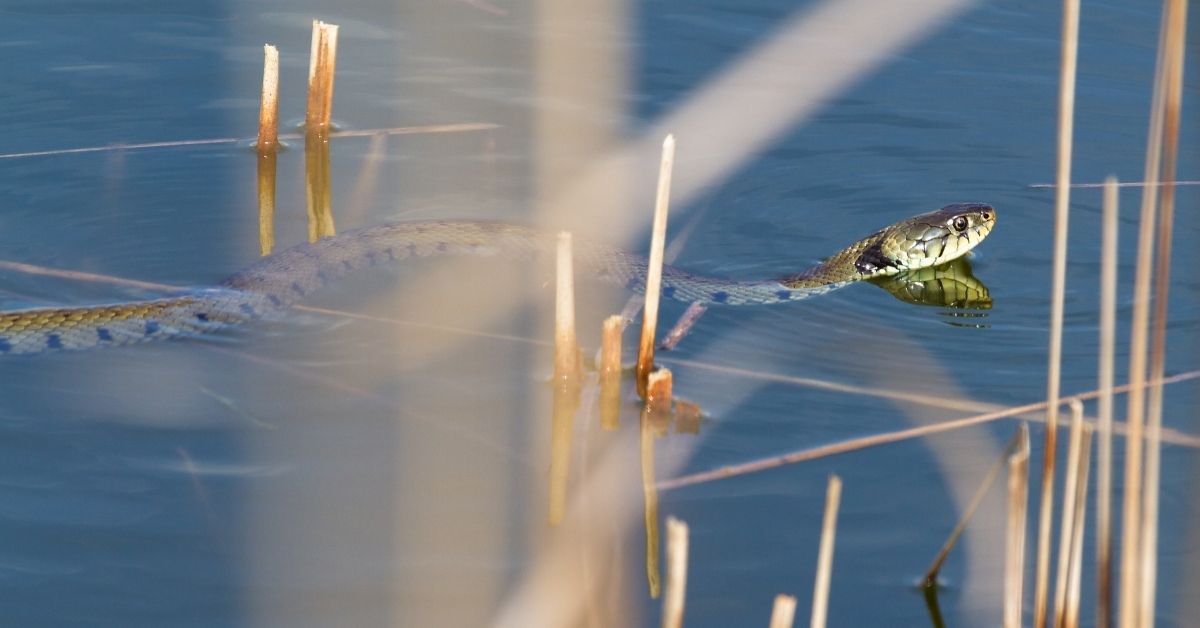 We are used to thinking about snakes crawling or slithering on the ground. With their bellies touching the dry surface, they move in a deadly silence towards their next location or unsuspecting prey.

Little do many know that these slippery serpents have a hidden talent – all snakes can swim, with many able to swim on the surface of the water.

What Snakes Swim on Top of Water?

While all snakes possess the innate ability to swim, only a few manage to slither almost unsubmerged in the water. To name a few, snakes that can swim on top of the water include the cottonmouth snakes, copperhead snakes, rattlesnakes, and bull snakes.

The Agkistrodon piscivorus or the Cottonmouth snake gained its common name from the cotton-like white discoloration inside of its mouth.They are usually found in the Southeastern portion of the USA.

These snakes are semiaquatic pit vipers. This means that you have an equal opportunity to see them basking under the sun on ground or swimming on the water.

These snakes, otherwise known as water moccasins, are one of the most popular examples of snakes that have the ability to swim as if they are crawling above the water. You can find them in various bodies of water including lakes, ponds, streams, and even drainage areas.

The Copperhead snake, scientifically known as Agkistrodon contortrix, is a venomous pit viper rightfully named because of its head’s copper-red coloration. The greatest populations of this snake are usually found in North America but smaller groups can also be found in various areas in Australia.

This snake is typically a land snake and resides in forested areas or semiaquatic habitats. While they usually prefer to stay in forests and slither in trees or some form of shrubbery, they may occasionally wander out and swim in nearby lakes or streams.

An extremely popular snake in its own right, rattlesnakes or Crotalus are venomous vipers that also have the ability to swim on top of water.

Rattlesnakes are known for their unusual tail which possesses a “rattle” located at the very tip of the tail. This unique characteristic got its “rattle” name due to its appearance and the shaking sound it makes when the tail vibrates.

These snakes are also typically found on land, specifically in rocky areas that allow it to camouflage and hide from predators and threats. When they do swim, they usually swim partially submerged with their tail positioned above and away from the water. However, they also occasionally swim on top of the water to keep their tails dry.

Bullsnakes, known scientifically as Pituophis catenifer, are nonvenomous American constrictors. These slippery serpents got their common name from the imposing hissing sound that they make which closely resembles the grunt of a bull.

Despite being generally known as a prairie snake and residing on dry land, you can occasionally find these slippery creatures near river bluffs or wading in the rivers themselves.

Despite all this, most snakes, including the ones mentioned above, usually prefer to swim slightly submerged in the water with their head, neck, and/or tails above the surface as opposed to swimming completely on top of the water.

How Do Snakes Swim on Top of the Water?

Snakes are able to swim and glide on top of the water due to its ability to propel itself forward with the use of its body and scales.

This motion, also referred to as a serpentine motion, is utilized by snakes on land as well as on water. Basically, they move from a state of rest and use their scales to propel themselves to their next location. Without losing momentum, the snake keeps going using the force generated from the previous movement to move to the next point.

This serpentine motion is the reason why snakes form an “S” shape when they move as each curve illustrates the points and locations they propelled themselves to.

In water, this allows the snake to stay almost fully unsubmerged in the water. Its body, in a way, creates this surfing motion. This motion allows it to stay almost completely above water through the constant force applied to the water’s surface with the use of its belly scales.

However, it is important to note that while all snakes are able to swim, not all of them have been able to adapt and fully utilize this method. This explains why some snakes are able to fully swim on top of the water while others swim partially or fully submerged in it.

Are All Snakes Who Swim on Top of the Water Venomous?

One common but outdated belief that people used to determine if a snake was venomous or not was to see how a snake swam.

If a snake swam on top of the water, it was considered venomous. If it swam submerged with only its head and neck above the water’s surface, it was most probably nonvenomous.

This theory was based on the hypothesis that venomous snakes were considerably more buoyant than nonvenomous snakes. While this is used to be a good rule of thumb, it has now been rendered almost completely unreliable by latest findings.

How Long Can Snakes Swim?

Snakes usually swim for around 5 minutes at a time. However, many species can swim long distances and stay submerged for almost two hours at a time.

Most of the time, snakes prefer to stay dry and on land for various reasons. When they do get into the water, it’s usually for one of two reasons: one, they need to get to a location across a certain body of water; or two, they need to either escape or pursue a predator or prey, respectively.

Given that, most snakes usually don’t spend much time in the water.

Can Snakes Swim on Saltwater and Freshwater?

Most snakes can survive in both types of water, but land snakes have been found to exhibit discomfort or shock when placed in saltwater. If they had to, they would be able to swim in saltwater but not for long as the saltwater can overwhelm them and lead them to drown.

Snakes can do a lot more than just slither on their bellies on the ground. They are extremely skilled hunters, deadly camouflage artists, and talented swimmers.

So if you thought that being in the water would protect you from these deadly creatures, then best think twice. While most will not harm you outright, some of these creatures will chase you away even through bodies of water if they feel even the slightest threat to their safety.