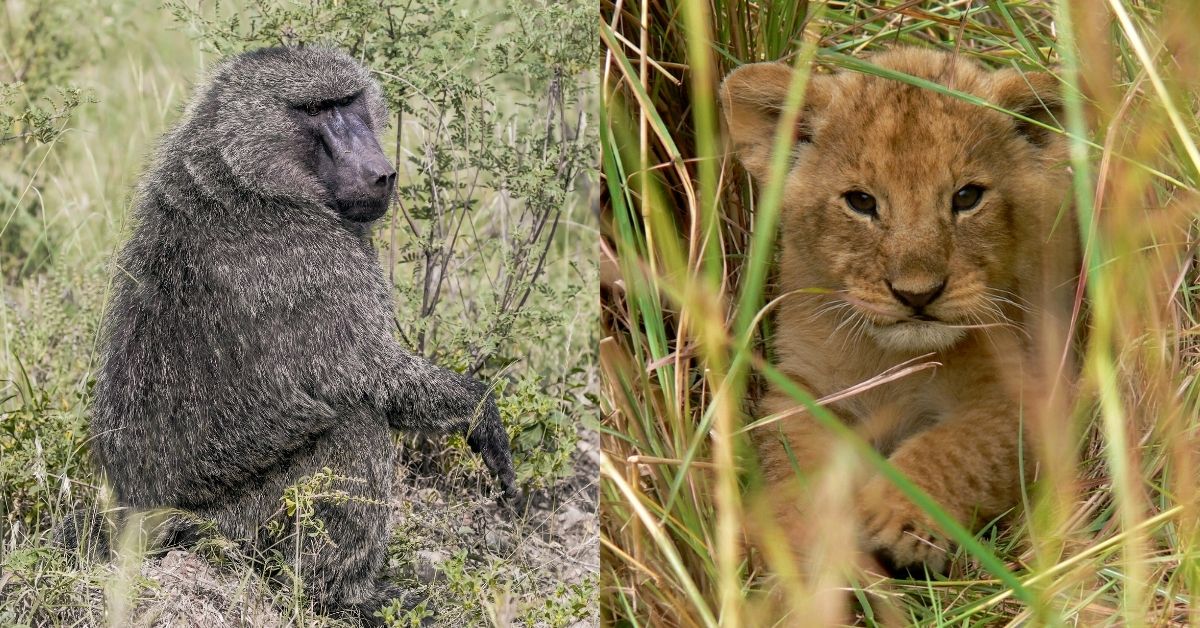 Baboons and lions share their habitat and often cross their paths. Young lions frequently chase baboons in hopes of catching one, and adult lions usually manage to do it.

Baboons have no hopes of killing an adult or adolescent lion but kidnapping a lion cub is possible, and there are instances when it happens.

Why Do Baboons Take Lion Cubs?

The three main reasons why baboons steal lion cubs are for food, out of spite, and out of curiosity. Baboons will eat lion cubs much of the time, but they will also take them just to torment the lions, or in some cases out of boredom or curiosity.

Baboons are opportunistic feeders and eat almost anything they can find that is easy to grab. Apart from eating all sorts of plants, like grasses, leaves, fruits, seeds, and bark, baboons hunt small antelopes, small monkeys, and rodents.

They are even known to break into farms to steal crops, but they won’t hesitate to kill and eat sheep, goats, and poultry. Therefore, it is not far-fetched for them to grab a baby lion if they happen to find one unprotected.

Sometimes, while females from the pride go for a hunt, lion cubs stay unprotected. The all-seeing baboons won’t miss this opportunity to hunt them for food. As lion cubs are vulnerable and can’t defend themselves, the meal seems almost too easy.

Baboons are very intelligent animals, and they have terrific long-term memory. Baboons are also very mean and mischievous. This combination leads to many incidents between baboons and other animals sharing their territory, like lions.

Lions are known baboon predators, and if they have a chance, they will hunt and eat a baboon.

Baboons can associate lions with danger, and because of their intelligence and shenanigans, they can possibly target lion cubs as a retaliation.

A baboon is no match for an adult lion, and even a troop of baboons would not dare to attack one.

However, a baby lion stands no chance against even a young adult baboon, especially that lion cub weighs about 3 lbs right after birth, is born with closed eyes and no teeth, and is dependant solely on its mother for the first two months of its life.

There is a big chance that baboons simply steal baby lions to lower the populations, and therefore have fewer predators to threaten them.

Baboons are naturally curious creatures. They often poke and prod many animals and plants to see their reaction. Apart from being a source of food, a lion cub could be a curious thing for a young and inexperienced baboon.

A young female baboon was spotted carrying a lion cub and grooming it like it was one of her own babies. This baboon’s curiosity led her to grab the cub from its den and explore it. The baboon didn’t mean any harm to the cub from the start, and the way it was carrying the baby lion around was careful and gentle.

There is no account of what happened to the baby lion after the sighting, but specialists speculate that the baboon got bored or agitated with the helpless cub and could have tossed it away or killed it and ate it.

After watching The Lion King‘s mandrill Rafiki often advising young lion Simba, many people get an idea that it is possible in real life that one species can adopt another.

There are instances of animals of different species becoming friends and caring for one another in captivity. Those are artificial and often supervised by people, and therefore should not be compared with life in the wilderness, where “eat or be eaten” is the most common survival practice.

Unfortunately, baboons are not as friendly or caring to other species in the wild, especially lions, who are known as baboon killers.

When a baboon kidnaps a baby lion, it is not to raise it. Some people witnessed baboons toting around baby lions, grooming them, and caring for them. It is a short-lived action, and after the baboon loses interest in the lion cub, it discards or eats it.

Even if the friendship between a baboon and a lion could be true, there is no chance for a baboon to care for and raise a lion successfully. It is too big of a difference between the species ever to work, the size difference of both animals and different diets being amongst the most important ones.

How Do Baboons Steal Lion Cubs?

Baboons usually stay away from lions if they can help it. They avoid any direct confrontation, and stealing lion cubs in the presence of their mother would definitely qualify as dangerous.

There is, however, an open window when baboons can sneak up to lion cubs and take them from their den.

It is usually during the mother lion’s absence when baboons venture around lions’ den to grab the babies. As very intelligent creatures, baboons can often figure out when litter is hidden in a bush, and as inquisitive and daring animals, they have a need to explore and find out for themselves.

In this way, they can steal baby lions without risking their own life.

Baboons usually avoid any contact with lions. They prefer not to get into fights, although they can deter lions from an attack by a sheer number in some instances.

That is not to say lions never hunt baboons, and baboons are aware of the danger. As intelligent and menacing animals, some people say that baboons figured out a way to diminish the number of predators.

Baboons kidnap baby lions to prevent them from growing up and harassing baboons. They also steal them for food and out of pure curiosity but never raise them as their own.

Regardless of the reason for the kidnapping, a lion cub taken from its mother can only have one future, and it’s not the happiest one.