Panther vs Leopard: What’s The Difference? 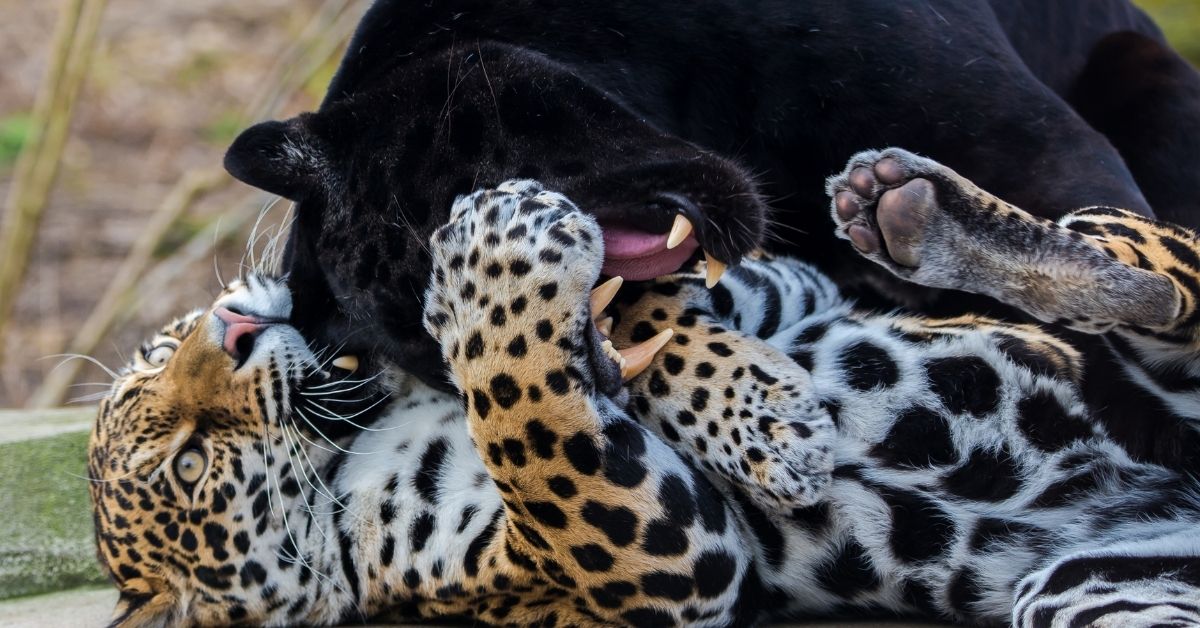 The name panther is used to describe many different cats, and as time went by, it started to confuse many people as to which of the big cats are actually panthers and which aren’t.

Nowadays, a panther is the most commonly used to describe melanistic big cats, like jaguars and leopards, called black panthers.

Is a Panther the Same As a Leopard?

Although there are some exceptions, technically speaking, a panther is the same as a leopard. A leopard, which Latin name is Panthera pardus, can be called a panther regardless of its color, although it is the most common name for a leopard with a recessive allele that makes it black. In that case, a leopard is called a black panther.

However, there are other black panthers that aren’t leopards. They are melanistic jaguars, which the black color is caused by a dominant allele instead.

To tell the difference between a wild black jaguar and a wild black leopard is relatively easy. Leopards and jaguars don’t live on the same continents. While jaguars inhabit the Americas, leopards live mainly in Africa and a few places in Asia.

Another instance when a panther may not be the same as a leopard is a puma. Even though it is not a correct name for a puma, some people and inofficial texts call it a panther. It might be the case that a panther usually describes a big cat, mainly solid-colored, that hunts prey.

Is a Panther Bigger Than a Leopard?

Depending on which big cat that we choose to call a panther, most are bigger than a leopard.

It is not difficult to find a panther that is bigger than a leopard unless we compare two leopards, considering that a leopard is the second smallest of the Panthera family.

The same result would be if we were to call a panther any other big cat from the Panthera family, except snow leopard, which is the only smaller panther than a leopard.

If we choose to call a puma a panther and compare it to a leopard, the leopard would be bigger, but a puma is not a real panther because it belongs to the Puma family.

Differences Between a Panther And a Leopard

If we assume that a panther and a leopard we compare are the same species ( Panthera pardus ), we are likely comparing the same animal. In that case, there are not many differences between them, apart from the obvious one – the color.

A leopard has short forelimbs and longer hind limbs, a long body with a long, white-tipped tail. Its fur is usually yellowish to golden in color, and its body is covered with black spots that form shapes of rosettes.

A leopard usually has yellow to light brown eyes. A leopard black panther is built exactly the same as a regular leopard and also has black spots forming rosettes. The difference is the color of fur and the eyes. A black panther’s fur is black with no white on the tip of the tail, and its eyes are usually green.

There are more differences in the case where we compare a black Panther Jaguar to a black panther leopard. Apart from the color difference, there is also the body size, the size and shape of the rosettes, and the habitat. Jaguars live in the forested areas of North, Central, and South America.

Jaguar panthers are bigger and more muscular than leopards. Their bite force is the strongest of all big cats in comparison to their body size. Jaguars also have spots that form rosettes, but theirs are bigger than leopards’ and have black spots filling the insides.

Are All Panthers Black?

No, not all panthers are black.

The most common use of the word panther is associated with solid-colored black cats, the black panthers. Still, some people call a panther a puma, which actually doesn’t even belong to the Panthera genus. Others may call a panther a regular colored leopard or jaguar.

In fact, the word panther comes from the classical Latin word panthēra, which originated from the ancient Greek word πανθήρα (panthera). It is most likely a collection of words πᾶς‎ (pan) meaning “all” + θήρα (thera) meaning “hunting of wild beasts, the chase.”

This word was used to name a genuine taxonomic family, Panthera, and describes all big cats that belong to it: tigers, lions, jaguars, and leopards.

Even though people usually don’t refer to a tiger or a lion as a panther, technically, they could because a panther is a big, spotted, or solid-colored cat that hunts other animals. It, therefore, means that, technically, not all panthers are black.

A leopard, Panthera pardus, may be called a panther regardless of its color. In that case, there are no differences between a panther and a leopard, except maybe the black panther, which, of course, is a different color than the regular leopard.

A jaguar (Panthera onca), a tiger (Panthera tigris), a lion (Panthera leo), and a snow leopard (Panthera unica) can all be called a panther because they all belong to the Panthera family. Some people also call a puma a panther, even though it doesn’t belong to the same family.

The name panther is sometimes used to describe many different big cats, but they all have the same thing in common, even if they are not from the same family. They all are predators that hunt other animals.