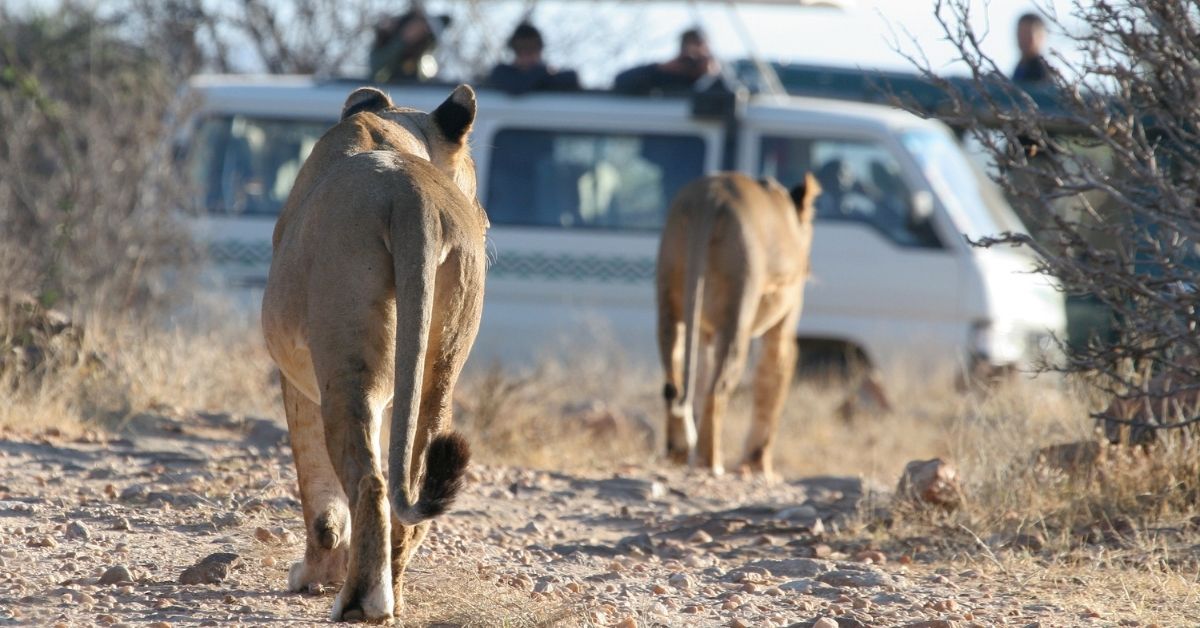 Lions are not the king of beasts and all animals for nothing. They possess great strength, speed, and killer instinct and are considered one of the most aggressive predators to walk the face of the earth.

All of that combined prove that a lion is a significant threat, but just how much of a threat are these big cats to us humans?

Yes, lions are known to attack humans. It is said that lions are responsible for around 20 to 200 human deaths worldwide, with the most devastating series of attacks claiming up to 1,500 victims.

These large cats lean towards having a greater tendency towards unpredictability and the development of man-eating habits. Their brave nature also enables them to enter or storm human settlements confidently.

While these large, intimidating cats are known for their aggressive nature, they usually do not attack humans unprovoked. Most of the time, these large cats ignore humans and safari cars and only charge when they feel necessary.

Lions only ever attack humans during certain circumstances. Most of the time, these giant beasts like to keep to themselves and stay away from any form of human interaction.

After all, humans are not a part of these creatures’ natural day-to-day life, so they usually have no reason to approach humans.

However, due to situations brought on by extreme circumstances, agitation, or ignorance by humans, these lions can be spurred to attack, severely injure, or even kill humans.

A lion has many choices for food. It has the strength and numbers to attack herbivores much larger than it is and is not so picky as to deny itself a smaller snack.

However, when its usual prey suddenly becomes unavailable or unattainable, it can wander towards humans and hunt them for food instead.

Lions that target humans usually do so as a last resort. These lions tend to be on the weaker side either because of old age or extended periods of time without food.

Some lions develop a taste for human flesh even when they are in perfect health. These lions are said to consume humans to supplement their already existing and healthy diet.

Lions usually enter human settlements with the intent to hunt and consume livestock for food. However, this may elevate to consuming humans as time goes by. These attacks usually come in the dark during nights without much moonlight.

Records show that male lions have a greater tendency towards seeking out humans.

Mating season is always a tense time for male lions as their hormones run high and their tendency towards aggression and unpredictability heightens.

Any approach be it from a human, another animal, or even a vehicle, can set off the lion during this time and lead to an unwarranted attack on the approaching entity.

Lion cubs are incredibly vulnerable to attacks from various entities: full-grown male lions who kill them off to ensure their lineage dominates, buffalo stampedes, or attacks from other predators such as hyenas, leopards, and the like.

Given this, mother lions are highly protective of their cubs and tend to keep a close eye on them at all times. If someone or something gets too close, best believe that the mother lion will come running towards her children to protect them.

Nowadays, many people spend a lot of money on safari trips to see lions up close. However, not everyone who goes on these trips necessarily follows protocol or provides the lion with the respect it deserves.

Some people who go on safari trips tend to wander too close for the lion, which can be mistaken by the wild cat as a threat or act of aggression towards them, leading them to fight back.

While some may aggravate the lion unintentionally, some purposely try to trigger the big cat by throwing rocks and other items at them, shouting at them, and other acts of aggression.

Either way, getting the lion’s attention probably will not end as well as one may hope. Keep in mind; these lions can easily kill off some of the world’s other fearsome predators just for existing in their land. They probably will not hold back against disrespectful humans.

Can Lions be Tamed?

While they may be trained to a certain extent, lions remain wild and unpredictable creatures and can never be truly domesticated or tamed.

Despite this, there are still cases of lions being kept as pets by the wealthier populations and royalty, a practice that has been observed for centuries.

Regardless, it is always made clear that there is always a risk of their large pet cat eventually attacking them without warning.

These animals can be conditioned to accept the presence of humans and tolerate it, but they can never be truly domesticated.

How to Prevent a Lion Attack

If you wish to prevent getting attacked by a lion, the answer is simple: Do not approach lions. The key point in many lion attacks is humans approaching the lion while underestimating the lion’s strength, aggressive nature, and unpredictability.

This can occur with tourists wanting to get a closer photo or interact with the animal. This risk also proves true to even seasoned trainers or animal experts that have years of experience dealing with this big cat.

If you ever spot lion cubs, do not try to approach them. Even if you mean well, the mother lion could be watching nearby and can jump at you without warning to protect her cubs.

Do not shout or create loud noises when near lions. This can irritate these wild beasts or could be mistaken as an act of aggression, causing the lion to charge towards the noise source to try and engage its threat.

Do not bring small pets or children along with you to areas with lions. They can be mistaken as prey and easily hunted down by a hungry lion.

When camping near areas with known lion sightings, ensure that all belongings and companions are secured. Avoid exiting or roaming around during the nighttime.

Lions are more active during the night and have incredible night vision. If spotted, you may end up as a midnight snack for these big cats.

What to Do In Case of a Lion Attack

Worst case scenario, you end up face-to-face with the king of beasts. What do you do?

Shrinking down or ducking may make you look like a smaller animal, leading to the lion mistaking you for prey.

Try to make yourself appear larger by opening your coats, waving your arms around, or placing items on top of your head.

Despite the great temptation and urge to make a run for it, do not try to run away. You cannot outrun this big cat, and sudden movements could urge the animal to charge at you.

Stand your ground, clap your hands, and make loud noises to attempt to scare the lion away.

Do not look away from the lion even for a second. If you turn your back and the lion goes to pounce on you, you will not see it coming, thus putting you at an even more significant disadvantage to defend yourself.

Retreat backward slowly while facing the lion the whole time.

While humans usually do not stand a chance against this wild beast, those who have been able to fight lions and survive found that aiming for the lion’s head and eyes has the greatest effect.

If the lion does try to jump you and attack you, try your best to stay standing upright. If you fall, the lion has more accessible access to your throat, ensuring a swift death.

There is no denying that the lion is one of the most aggressive predators you can encounter in the wild. While rapid urbanizations and constant exposure have led them to tolerate our presence, that does not mean that we can consider ourselves safe with these wild beasts.