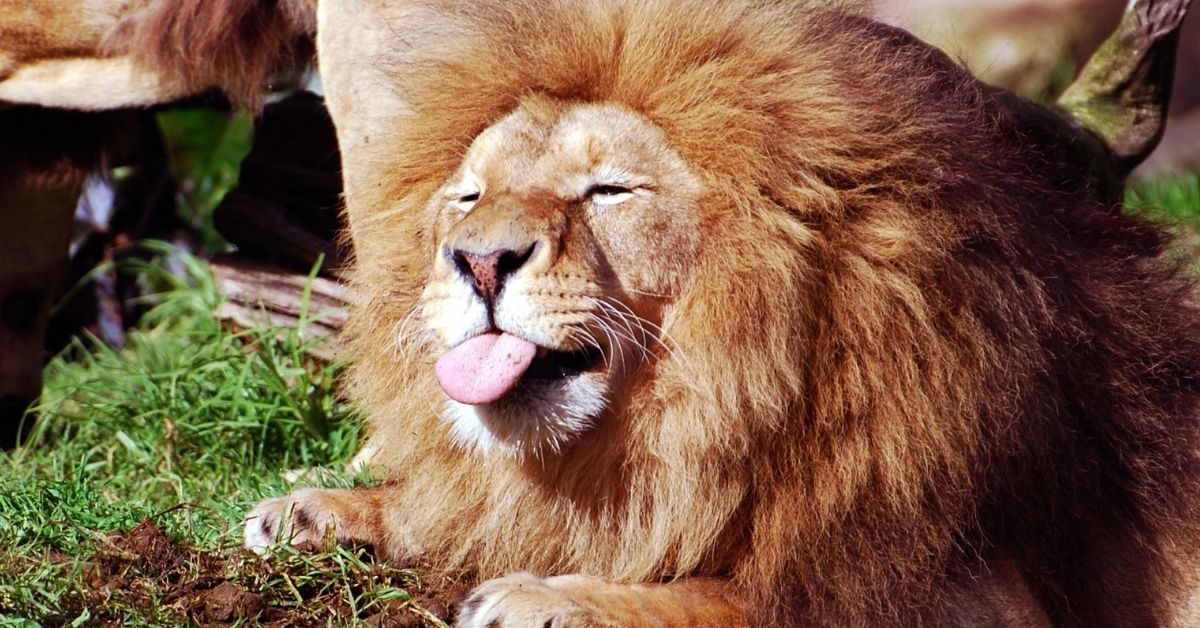 The king of beasts is known for his might, strength, and overall dominance over all of animal-kind. The lion is famed for its muscles, size, and bite. However, there is still one less popular part of the lion that may surprise people – its tongue.

While they don’t receive as much attention as the lion’s other, more prominent features do, the lion’s tongue is an exceptionally intricate wonder.

You would think that the scariest thing that you could find inside the lion’s mouth would be its teeth, but we’re here to tell you; you have to watch out for the tongue, too. These tongues are certified weapons as well.

The lion’s tongue is not built smooth like other tongues are. It is covered in papillae or sharp, tiny spines.

Getting licked by a lion is far from an exfoliating scrub. In fact, it is more like getting rubbed by extremely rough sandpaper. All it takes is a few licks to draw blood.

This big cat’s tongue spikes are so sharp that they have the ability to lick through dirt, skin, and even meat. All it would take is a few licks for the king of beasts’ tongue to effectively get through all the layers of the skin.

Functions of a Lion’s Tongue

Now the papillae on the lion’s tongue aren’t only for decorative purposes. These spines perform various functions that aid in the lion’s day-to-day activities.

Lion tongue barbs aid in the ingestion and digestion of their prey due to their sharp ability to remove any unwanted portions of the prey’s bodies.

After taking their prey down, these big cats begin to lick their kill to get rid of the animal’s hair or feathers, and skin and get to the meat underneath. It’s their way of sort of cleansing their meal before biting in.

The spines also tenderize the meat underneath before the lion decides to chomp down. Because there is a certain amount of saliva involved, the act of licking also aids by kick-starting the digestion and breakdown of the meat.

If the lion wanted to, it could lick an animal straight to the bone to get to as much meat as it can before discarding the remains.

The papillae also aid the lion in maintaining its good looks as it functions as a grooming tool for the big cat.

The lion spends a lot of its time getting rough and dirty, whether by hunting, fighting, or just plain lazing about and taking naps on the ground. This can lead to a lot of dirt and unwanted items getting trapped in the lion’s fur.

Good news for the lion, though, its tongue barbs function similar to that of a comb and can quickly get all the dirt, mud, and other stuff out of the lion’s majestic mane and fur.

Lions, much like regular house cats, use their tongues for drinking water. At first glance, it looks like they are scooping up water with their tongues. However, there is more to it than that.

These big cats’ tongues are actually playing with physics each time it goes down for a drink of water.

You see, when lions drink water, they only have the tips of their tongues touch the water. They draw water to their mouth by quickly withdrawing their tongue, creating a column of water which they catch with their mouth.

The spines on the lion’s mouth actually enable it to catch more water in one lap, which is said to be the reason why lions are said to lap more water more slowly than other cats would.

Lions travel in prides consisting of several members. These prides are tightly-knit family units that bond over various activities such as hunting, playing, and grooming.

In this case, the lion uses its tongue by licking other members of its pride to form or strengthen social bonds. Lions in the same pride may also assist in grooming each other.

Would it Hurt to Get Licked By a Lion?

The thought of getting licked by a tongue with barbs as numerous and as pointy as on the lion’s tongue is extremely scary. However, these big cats have more control over their tongues than one may think.

True, this concealed weapon resting inside the beast’s mouth can unload a world of pain and tear off many layers of skin and muscle should the lion wish it. However, many trainers of the lions have been licked several times without much discomfort.

Lions have complete control over their tongues and can adjust their pressure depending on the situation.

The amount of pressure applied during licking for grooming and social conduct can be significantly different from that of licking meat off of bones.

However, one shouldn’t get too comfortable with lions licking. These extraordinarily rough and sharp tongues can still cause serious injury to unwitting humans and animals. They should be avoided as much as possible.

Another reason to avoid lions licking you is the possibility of what might come next. As many trainers and experienced keepers will tell you: “Licking leads to biting.”

Lions licking you can possibly be no problem at all. However, a lion biting you is another story that should be avoided at all costs.

Do Other Big Cats Have Similar Tongues?

The lions aren’t the only big cats with terrifying tongues. Tigers are also known for the sharp hook-shaped barbs on their tongue.

Like the lions, these barbs also aid the deadly tiger when devouring their prey and grooming themselves, among other functions.

These king cats have this one shared quality that only adds to their terrifying and beastly nature.

Tongues are incredibly fascinating organs, but the lion’s tongue takes them to a whole other level. This big cat’s tongue not only aids in eating and drinking, but it also has the strength and means to remove layers and layers of skin and meat.

These tongues are weapons in themselves that only add to the killer capabilities of one of the mightiest cats and the king of beasts: the majestic lion.