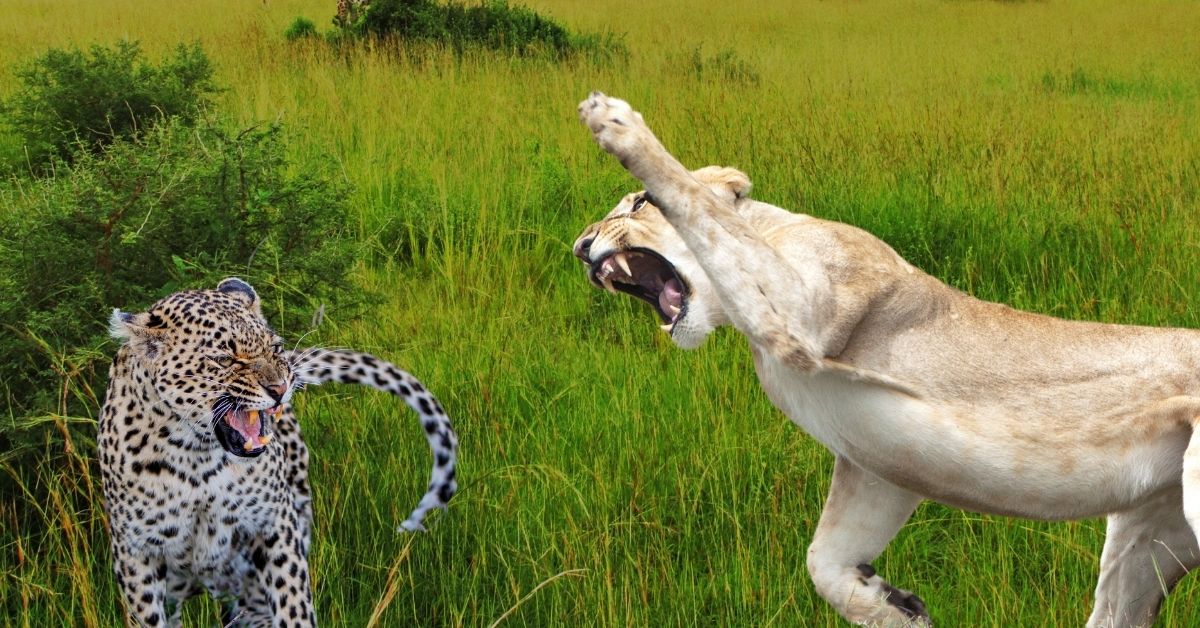 Leopards are known to be among the fiercest ambush predators you can find in the wild. They aren’t known to be picky eaters and can hunt anything from gazelles and baboons to fish and porcupines.

However, as the circle of life would have it, these majestic animals are also prey for other creatures of the wild.

Just think about it: Given that the leopards are among the fastest and strongest animals in the wild, what kind of talents would a predator need to make leopards prey?

Full grown leopards are apex predators and don’t have any natural predators. However, leopard cubs have many predators such as lions, tigers, hyenas, and even other leopards.

Leopards, while extremely strong and daunting predators, can be easy prey for stronger and smarter predatory creatures. The strongest factor that can lead them to get preyed on is their tendency to live solitary lives.

Leopards often travel and hunt alone and only interact with others of their kind during mating season. This isolated nature can make them vulnerable to creatures that hunt in groups such as lions and hyenas.

Despite their fearsome nature, they are also among the smallest of the big cats that can easily be overpowered by larger carnivorous predators or other enormous beasts whose paths they cross.

6 Things That Prey on Leopards

While leopards may not have prey in the normal sense of the word there are five creatures that will activley kill leopards should the come across them, and one that seeks out lepoards to kill them.

While leopards are considered big cats, they are usually small in comparison to lions making them uncommon but potential prey of these kings and queens of the jungle. In fact, the lion is responsible for 20% of leopard deaths.

Lions also tend to hunt in groups making it difficult for lone-traveling leopards to escape the attacks of these prides. When faced with these predators, leopards often run for the treetops where lions cannot reach them or, when surrounded by an entire group of lions, feign submission until they are able to escape.

In Asia, Tigers and leopards often share the same hunting grounds and habitats allowing for great opportunities for these cats to bump into each other especially since these two predators often hunt the same animals as prey.

While they mostly coexist in peace, there have been reports of tigers hunting and killing leopards. Their large size and overbearing strength are often no match for the smaller leopard who is only about a third of a tiger’s size in comparison.

Hyenas often travel in packs or clans which make it easy to outnumber and overpower a leopard. These creatures alone are no match for the mighty leopard and often find themselves the prey of the strong cat.

However, in larger numbers, they can easily overwhelm the leopard and successfully turn the situation around by making the predator their prey.

Hyenas also have the strongest bite force of any land animal that can easily take down a leopard with just one chomp. They are also said to have greater stamina thus giving them the ability to chase down prey until the latter is exhausted.

These predators are also known for terrorizing leopards by stealing their kills. After the leopard has successfully killed its prey, nearby hyenas can attack the leopard and scare it away taking its kill for themselves before the former has had the chance to take it someplace safe to consume.

While these cases are extremely rare, snakes can also take down and consume leopards as prey. Large constrictor snakes can sometimes share the same territories that wild leopards do thus giving them the chance to attack these wild cats.

These snakes can hide in the trees where the leopard frequents and wrap themselves around the leopard, trapping it. Once the leopard has been choked to death, the snake will then proceed to slowly devour its prey.

However, if unsuccessful, the leopard can turn the tables around and kill then consume the snake in retaliation. Snakes often go for the younger leopards who are not able to defend themselves as well as a full-grown adult leopard would.

One of the leopard’s greatest predators is no creature of the wild but rather civilized humans in search of their next big prize.

While the hunting of leopards is considered legal in some parts of Africa so long as you have the right permit, these ferocious cats are often also victims of poaching to illegally obtain their highly fashionable leopard skin coats among other things that humans may consider as trophies from their kill.

Leopard skin remains, to this day, a valuable material used in the manufacturing of items in the fashion industry as well as furniture, upholstery, among other things.

Sometimes, these majestic creatures are hunted simply for amusement and sport leading to the unnecessary depletion of their species and their vulnerability to extinction. As a result, these jungle cats are said to show extreme fear of humans and avoid contact with them as much as possible.

Despite the numerous other predators that they have, the biggest threat leopards probably have are other leopards. Cannibalism is a practice commonly done by leopards.

Again, these fierce cats are not picky eaters in the slightest. So should a hungry leopard chance upon another of its kind, then you can bet that the hungry leopard will hunt the other as prey for food.

However, the most common scenario is often older males eating younger males or cubs to establish territorial dominance and ward off mating competition. There have also been images seen of a carcass of a leopard who already died being retrieved by another supposedly to eat.

How do Leopards Evade Being Caught?

With all the dangers that they continue to face in the wild, leopards have developed their own unique ways of escaping their predators and saving themselves from imminent danger.

When they’re not hunting, they are often found resting on strong, high tree branches to be safe from other lurking predators. They are also often found retreating to trees whenever they are being pursued or threatened.

While they are notably smaller than other jungle cats, they are also known to be among the fastest and can easily outrun some of their strongest hunters.

Leopards are also considered to be very intelligent as shown in the way they feign surrender to get their predators to let their guard down allowing them to create a chance to escape.

Leopards can still find themselves as prey under just the right circumstances despite being extremely lethal and terrifying predators in their own right.

As a result, their numbers continue to dwindle as a result of their being hunted as well as their continuous loss of habitat. No one, not even impressive leopards, is safe in the wild.

Don’t get us wrong though, these feisty felines can still hold their own against even the toughest forces that go against them.

While we cannot control what nature has to bring for these wild cats, we can control our contribution to their vulnerable numbers and put an end to the unnecessary preying on these majestic creatures.