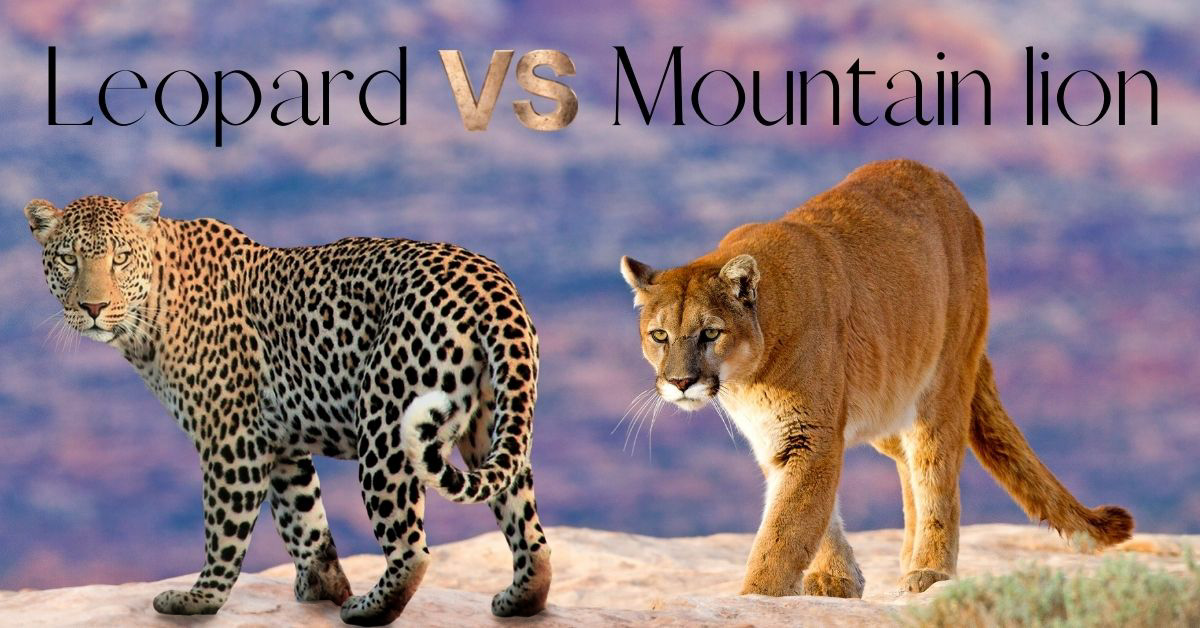 Leopards and mountain lions have one major thing in common amongst other, smaller similarities. They are both big cats.

Some people might confuse leopards and mountain lions, as both cats can be called panthers, depending on the region, but there are many differences amongst these felines.

Is a Mountain Lion the Same as a Leopard?

Mountain lions and leopards inhabit different continents, and their paths never cross in the wild.

Are Pumas Stronger Than Leopards?

It isn’t easy to say with certainty which of those two big cats is stronger, puma or leopard. Their relative strength is on par, considering they can both drag their bodies and the weight of their kill up a tree.

Although mountain lions reach bigger sizes than leopards, their body weight is similar. It might suggest that leopards are more muscular than pumas, and therefore their absolute strength could be greater than pumas’.

Both big cats can kill prey a few times bigger than them, and their bites have a similar strength of 350 PSI (108 BFQ*) for mountain lions and 310 PSI (94 BFQ*) for leopards, but taking into consideration their body build, the environment they live in, and general fighting will, in my opinion, a leopard would have a bigger chance of overcoming a mountain lion.

A mountain lion’s build is closer to that of a domesticated cat, whereas a leopard more resembles lions and tigers in its body shape. It gives a leopard a slight advantage.

Differences Between a Mountain Lion and a Leopard

Even though both mountain lions and leopards are big cats, they have many differences, from the most visible one – the spots and coloration to their habitat.

Mountain lions are considered the second biggest cats in the Americas, right after jaguars. They can reach between 24 – 30″ tall and 4’11” – 9′ long from nose to tail tip. Their weight balances between 64 – 220 lbs.

Female cougars are typically smaller than males, but they are still considered bigger than leopards despite their rather slender build.

Pumas have solid-colored bodies with no spots, usually tawny fur, but the color can range from reddish to silvery-grey. They also have two black stripes on each side of their muzzle and a black tip of their tail.

One can encounter a spotted mountain lion when it’s still a cub. There have been sightings of adult specimens that retained spots, but those are very rare.

On the other hand, leopards are from pale yellow to dark golden, with multiple black spots covering their bodies. The marks on their back form rosettes, and they also have white-tipper ears and tails.

There are also melanistic leopards whose fur is black due to a recessive allele. Those are called black panthers, and they are often mistaken for another melanistic species, black jaguars.

They are more muscular and robust than mountain lions, considering their body’s high-to-weight ratio.

Leopards inhabit the larger part of Africa, Caucasus, and Asia, although the population is in decline. Their preferred terrain varies from riverine forests, rainforests, and woodlands to savanna and grasslands.

Leopards usually avoid deserts, areas where snow lies for a long time, and proximity to urbanization, although leopards are often spotted near human settlements in India.

Although they prefer to stay on the lower grounds, leopards were spotted as high as 14 000 ft in the mountains.

On the other hand, mountain lions can adapt to any terrain from lowland to mountainous deserts, all types of forests to open areas with barely any vegetation. Their habitats span two continents, from north, in the Yukon Territory in Canada, to south in the southern Andes in Chile.

However, mountain lions are considered mostly extirpated from the eastern parts of North America, except Florida and sporadic sightings in Kentucky, South Dakota, Illinois, and Tennessee.

Mountain lions have no natural predators except humans, but they often conflict with grizzly bears, black bears, and gray wolves. The latest is often found to push cougars out of their habitats by sheer number.

Mountain lions are opportunistic feeders and can eat any animal they can catch, from insects to large deer over twice their size, like moose and feral horses.

Cougars rely mostly on their skills as ambush predators, stalking their prey before leaping on its back and neck. However, they can also chase their prey over a short distance, reaching a top speed of 50 mph.

Like most big cats, except lions, mountain lions prefer a solitary life. However, they are capable of sharing a meal with a group of other mountain lions and forming a small community in their area, where they interact with each other. Cubs usually stay with their mother for around two years before setting on their own.

Leopards are also rather solitary creatures, staying in pairs for a few days only during mating season. They are very territorial cats, and although few females can share a territory with a male, the same sex usually fights for the right to hunt in the area.

Leopards have many predators, like lions, hyenas, and tigers, who won’t hesitate to dispatch any specimen, especially targetting the defenseless cubs.

Their secret weapon is climbing, at which they excel. They are not the fastest runners, reaching a top speed of 36 mph, but they are excellent ambush predators, able to leap over 20 ft to catch their prey.

Although leopards are very muscular and robust, they prefer to hunt middle-sized prey up to 90 lbs, but they can kill prey as big as adult male eland, weighing about 2 000 lbs.

However, smaller prey is easier to cache on a tree, away from other predators who want to steal leopards’ kill.

Despite never crossing paths with each other and differing in appearance, mountain lions and leopards have many similarities. They are both capable hunters using ambush as their preferred hunting technique. They also have to keep vigilant against other predators in their respective habitats.