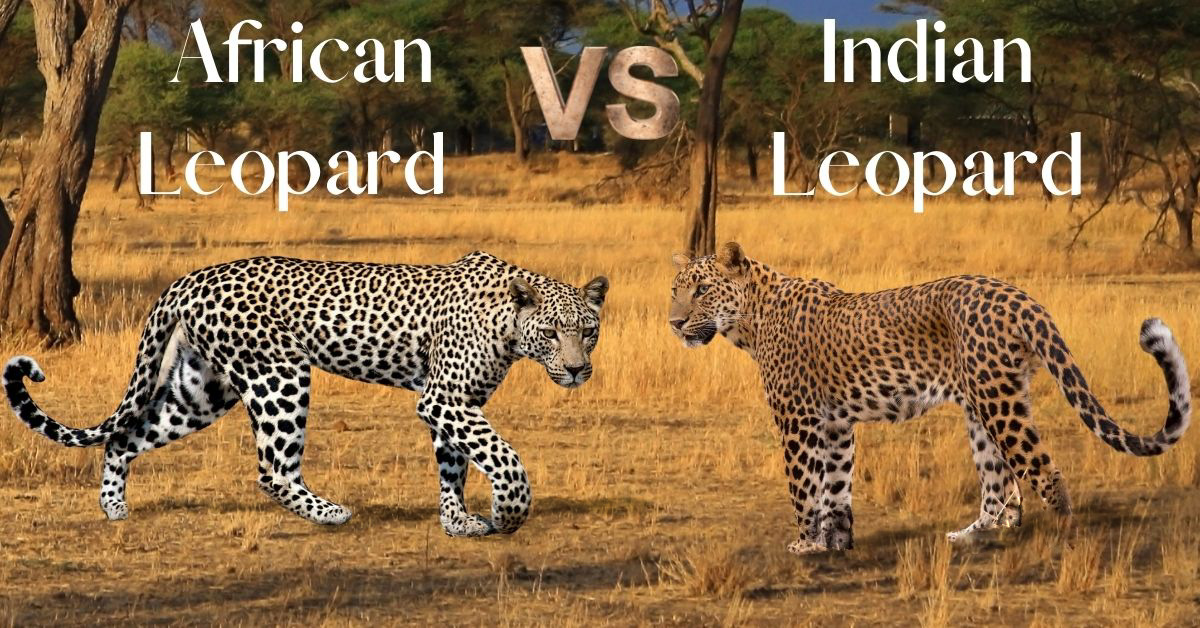 Not many people know this, but there are several subspecies of leopards. These leopards are located in various parts of the world and have their own individual traits that set them apart from other leopards. In this article, we will be focusing on the Indian leopard in comparison to the African Leopard.

There are many different subspecies of leopards (Panthera pardus). These are:

Each one of these leopards varies in size, weight, habitat, among many other things. However, studies suggest that no two subspecies are probably as different from one another as the Indian leopard is vs. the African leopard.

The Indian leopard or Panthera pardus fusca is a subspecies of leopard that is resident to the Indian subcontinent specifically in India, Bhutan, Nepal, and some areas of Pakistan.

These leopards are widely known to have higher populations of man-eaters, often being hunted down in persecutory attacks for hunting down humans near settlements.

On the other hand, the African leopard, Panthera pardus pardus, is a subspecies of leopard that is a local of the African continent.

These leopards are much larger and stronger than other leopard subspecies placing them just at the top of the food chain. They are also the subspecies with the greatest population.

Other more observable differences between the two species include the following:

The Indian leopards are noted to have darker, more prominent spots on their coats which allows them to blend into their forested habitat better. Because of their predisposition to darker pigments, these leopards have a greater tendency to exhibit melanistic coats (black panthers).

The African leopards’ coats vary depending on their environment. Overall, they have a lighter coat in order to better match dry, African woodland habitats. They also have smaller spots that appear to be greater in number in comparison to the Indian leopards’.

The Indian leopard is found in the Indian subcontinent. They are said to reside in various types of forests from tropical rainforests, temperate forests, to arid regions with coniferous forests, deciduous forests, and even mangroves of Bengal. Occasionally, they are also found in the alpine regions of the Himalayas.

From the name, the African leopard is widespread in various habitats in sub-Saharan and North Africa. They reside in places such as grasslands, savannahs, and mountainous forests. At times, they may be even seen in rainforests.

Due to their proximity to human settlements, Indian leopards can also develop man-eating tendencies and hunt women and small children.

African leopards, on the other hand, have over 92 prey species documented. These prey include large ungulates, medium-sized ungulates, antelopes, gazelles, rodents, hyraxes, beetles, hares, and many more.

As of 2020, the current population of Indian leopards in a known tiger range landscape reached numbers of 12,172 to 13,535. They are currently listed as Vulnerable by the IUCN Red List because of their dwindling numbers.

As for African leopards, they are currently much larger in number with a whopping 700,000 population. However, due to the rapid decrease potentially brought on by poaching, they are placed in the Near Threatened to Vulnerable status by the IUCN Red List.

Humans are the greatest threat to both of the leopard subspecies’ existence.

Indian leopards’ and African leopards’ populations continue to diminish due to habitat loss brought on by rapid urbanization in their areas. This also brings them to proximity to human settlements and can lead to conflict and retaliatory attacks between the leopard and the humans for livestock and prey.

They are both also victims of illegal trophy hunting for their skins and various body parts adding to their already shrinking numbers.

They may both also be at risk of being killed off by larger predators such as the tiger (Indian leopard) and the lion (African leopard) due to competition over shared territories and prey.

Despite their vast differences in physical and genetic aspects, the Indian and African leopards still hold many similarities in behavior.

For one, they are both solitary creatures who only interact with other leopards during mating season.

They are also very well-known to be nocturnal creatures often opting to hunt between the hours of sunset and sunrise to avoid competition from day hunters and allow for the element of surprise for unsuspecting prey.

While these leopards technically belong under the same species and have an established mixing and interbreeding of subspecies, it is amazing how much these two vary.

The difference does not lie only in where they are located in the world, but in various aspects of their physical and genetic characteristics.

These two leopards offer us a rare peek over so many surprises that a seemingly well-known animal can offer us in this vast animal kingdom.