Hyena vs Leopard: Can a Hyena Kill a Leopard? 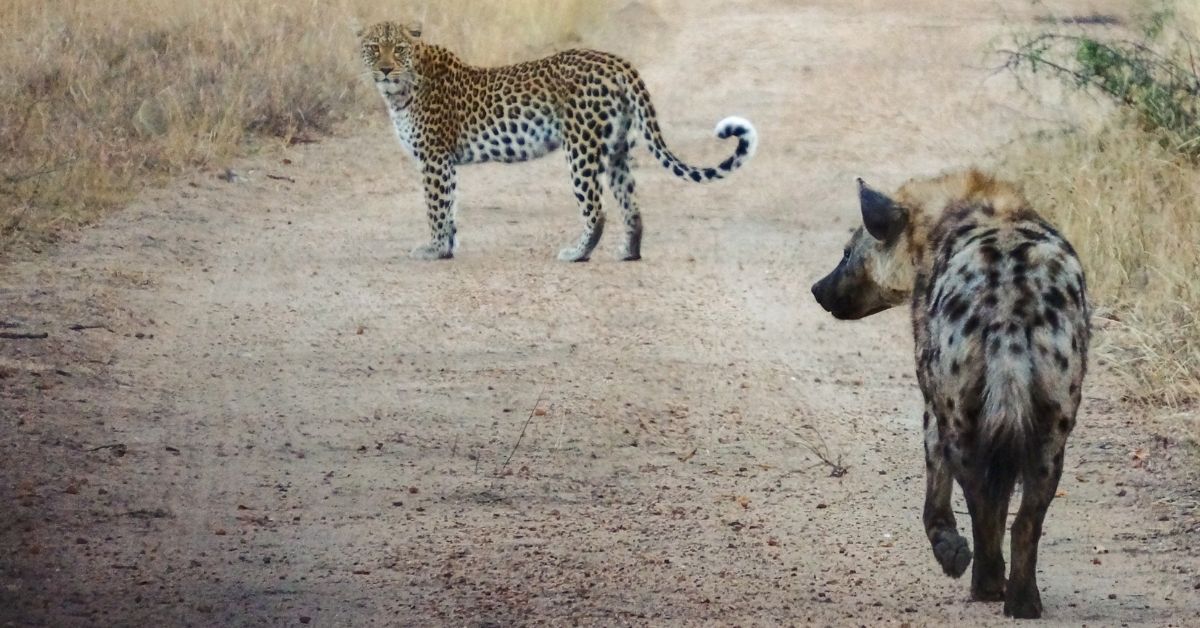 Hyenas are known to be on a leopard’s list of predators, and big cats tend to avoid hyenas if possible.

Can a Hyena Kill a Leopard?

A single hyena can probably kill a leopard, although at a very high price.

Leopards usually try and avoid hyenas. If one hyena approaches a leopard, the big cat prefers to flee rather than square off, even if it means abandoning its kill.

Even though a leopard is an agile hunter, with strong limbs and ferocious bite that it uses to latch on its prey’s throat to choke it to death, a hyena, although less agile, has the strongest bite force of all land predators, stronger than a lion or a grizzly bear.

Leopards are known to defend themselves ferociously with claws, teeth, and strong limbs. In most cases, while fighting a single hyena, it could be enough to deter the hyena from fighting.

Leopards can deal great damage to hyenas, and sometimes they manage to escape, even when they are facing more than one, but those instances are rare.

Most leopards know that seeing one hyena means that there is more somewhere nearby, as hyenas always travel in packs. While one young hyena is a challenge a leopard might try to overcome successfully, an older one or a whole pack of hyenas means more than likely death.

Yes, if they get a chance, hyenas attach leopards.

A pack of hyenas, if they can get a leopard, will certainly kill one. By killing a leopard, hyenas ensure that there is less competition for food in their area, but it is also a source of food for them.

Hyenas are known to eat anything they can find or kill, from ungulates to other predators, like leopards.

Hyenas are opportunistic feeders. A pack of hungry hyenas won’t hesitate to go up against a crocodile, a pride of lions, and a single leopard to steal their food.

While a crocodile or a pride of lions is still a force to be reckoned with, a single leopard doesn’t pose such a big threat. It is also common if a leopard is too slow with its retreat, it may end up on the hyenas’ menu right beside its prey.

Are Leopards Scared of Hyenas?

Yes, leopards are scared of hyenas, especially a whole pack of them. While one hyena might be a challenge for a leopard, in some cases, leopards can fight it off or kill it.

When it comes to a pack of hyenas, a single leopard’s chances of survival are very close to zero unless it runs away.

Leopards prefer to escape, usually by climbing a tree and keeping their health rather than staying and fighting hyenas, even if it means abandoning their meal. On many occasions, hyenas chased leopards away from their prey.

Hyenas have no qualms stealing other predators’ food, and they mastered it. Leopards fear hyenas because facing a pack could end up fatally for the big cats. Hyenas also often target leopard cubs, considering them an easy meal while freeing their hunting grounds from the competition.

Leopards are known to hunt hyenas on occasions. There are rare instances that a young hyena travels alone or strays too far from the pack. Those are the moments leopards pick to attack if they have a chance of meeting a lone hyena.

As an ambush predator, a leopard is able to surprise an unsuspecting hyena and deliver a fatal blow, usually by jumping on it from behind, grabbing its throat, and choking the hyena to death before it can fight too much.

In case there are more hyenas nearby, leopards often take their kill to a tree, where they can eat undisturbed without worry for their lives.

Leopards don’t usually hunt unless they are planning on eating. Many predators happen to kill other predators and leave the kill, but leopards don’t want to waste precious energy, and since they are smaller than other big cats, it costs them more energy to kill their prey.

It also means that on the rare occasion when a leopard kills a hyena, a leopard will most definitely eat it to replenish spent energy.

Leopards and hyenas often clash over their meals. In most cases, a leopard is chased away from its food by a pack of hyenas. Sometimes, when a leopard is not fast enough, it also becomes a hyena meal.

On a very rare occasion, a leopard is able to repay hyenas for their thievery and reign of terror by ambushing, killing, and eating one hyena. However, facing even one adult hyena is something most leopards prefer to avoid due to the risk of injury or even death.