How Strong is an Orangutan? (Stronger Than You Think) 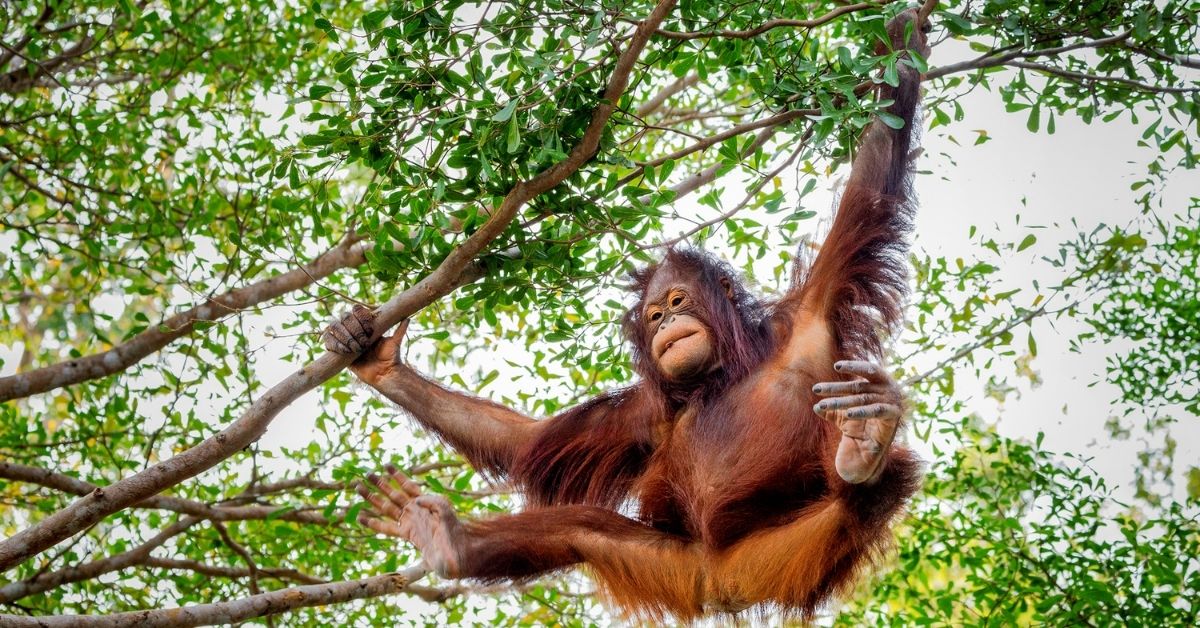 Orangutans are among the largest members of the great apes. However, despite their large build and imposing size, they are able to live an arboreal lifestyle and move about from tree to tree.

This type of movement for a primate this big would take an incredible amount of strength bringing forth the question — how strong are these “giant” orangutans?

How Strong are Orangutans?

Orangutans are not just among the largest members but also the strongest members of the primate family. This is exhibited in the way they are able to swing from tree to tree with little to no difficulty.

This strength is largely due to the way that they are built. Orangutans have much longer arms and much wider shoulders that allow for greater upper body strength.

In addition to that, they also have stocky builds with weights of around anywhere between 110 to 198 lbs for males and around 66 to 110 lbs for females.

If you have any doubt or questions as to how strong these gentle giants can be, let us tackle each aspect wherein the strength of these large primates shine.

The most basic exhibition of the orangutan’s strength is its ability to lift its own weight as it swings from tree to tree. While this ape can make this movement look so easy, it actually takes a great deal of strength to successfully execute.

Keeping the weight of orangutans in mind, you would get a good idea of the tremendous amount of strength that it would take to lift themselves up to the trees; much more swing from branch to branch.

If that weren’t impressive enough, it is said that orangutans can effortlessly lift up to 500 lbs in weight. That’s over two times their own body weight!

Of course, these great apes would not be able to swing from branch to branch if they did not have a good grip to hold on to the branches.

It is said that orangutans have four times greater grip strength than that of humans. This feat is mainly due to the structure of these apes’ hands.

Orangutans have long hands and feet with a the thumb or big toe found opposite their fingers and toes respectively. This formation of their hands and feet allows them to have a firmer grip.

Orangutans may be known as gentle giants but there is nothing gentle about the amount of strength a single chomp from these primates can unleash.

Orangutans have a bite force of 575 PSI that enable it to bite down and feed on some of the toughest food sources in their habitats. These include nuts, fruits covered in spines, as well as rough tree bark.

While this may not be among the strongest of the bite forces in the animal kingdom, the orangutan can still leave quite a mark with its mouth should they wish to.

Are Orangutans Stronger than Humans?

Data suggests that orangutans are much stronger than humans. In fact, it is believed that these giant apes are around seven times stronger than the average human.

Humans, as per the latest record, can lift up to 581 pounds. While this may seem like a lot, it would also take a lot of effort and strength in the part of the human to lift that much. On the other hand, orangutans can lift weights like that with little to no problem at all.

If a human were to find itself in a face to face fight against an orangutan with nothing but his own brute strength, the orangutan would probably have the human beat before he could lay a hand on this great ape.

Are Orangutans Stronger then Gorillas?

These two large great apes both have imposing strengths that can overwhelm most observers. However, out of the two, the gorillas come out on top.

Orangutans truly are among the strongest of the primates but are no match to the stockier, heavier build of the gorillas. This large discrepancy in body mass makes for a greater disparity in outright strength.

While the orangutans can surely lift a heavy load, the gorillas can lift so much more. The latter can lift over a whopping 1100 pounds.

Gorillas also have a much stronger bite force that is over twice as strong as its cousin orangutans reaching up to 1300 PSI.

While the chances of these two primates meeting are far and few due to their different habitats, should they be faced against each other in a battle of physical strengths, the gorillas would most certainly overwhelm our orangutans.

Are Orangutans Stronger than Chimpanzees?

Usually, this would be a no-brainer as orangutans are considerably larger than chimps and can just as easily overpower their smaller chimp cousins.

When it comes to size and overall strength, orangutans can easily overwhelm chimpanzees due to their sizeable difference in weight (chimps have an average weight of 88 to 110 pounds for males and 70 to 103 pounds for females).

Chimps also have a much weaker grip strength of 440 pounds. These small animals can also only lift up to 250 pounds which is nowhere near the amount that the orangutans can lift.

Interestingly though, these two primates come up with similar bite forces with the chimp coming up with 550 PSI. This is only 25 PSI short of the orangutan’s own impressive bite force.

The one area wherein the chimp may have the orangutan beat would be in its aggression. Chimps are used to fighting and acts of aggression towards each other and other animals.

Orangutans, on the other hand, are much more gentle in nature and will most likely bow out before a fight will ever break out.

Orangutans may be gentle giants but don’t let this fool you. They are still among one of the greatest forces to be reckoned with in the order of the primates.

Their large builds and heavy weights are not just for show. They may not be the most aggressive or the most terrifying but they can still easily overpower whatever threat may come their way.