How Long Can a Cheetah Run? 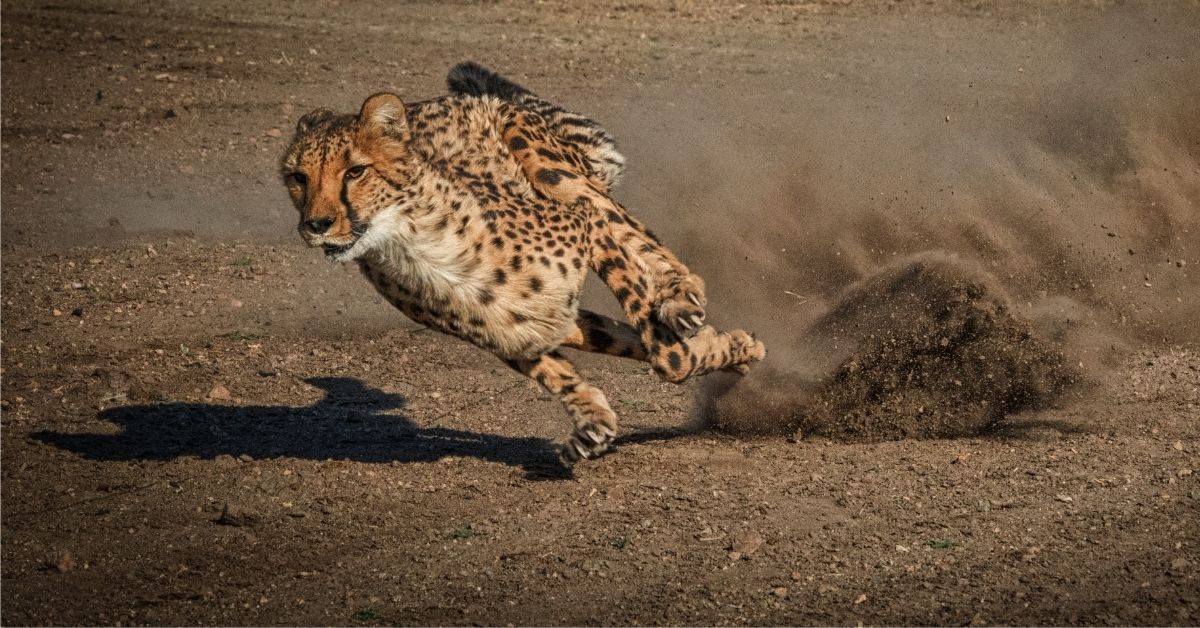 There are many characteristics linked to the majestic cheetah, but the most defining trait of this big cat has to be its lightning speed.

The cheetah can run impressive speeds from 80 to 130 kilometers per hour or around 50 to 80 miles per hour. This is just one of the ways how this unique feline shows its superior power. However, does this cat have limits to its speedy runs?

Length of Time a Cheetah Can Run

Typically, a cheetah can run only 20 to 30 seconds at a time before it needs to stop and rest.

Cheetahs are not built for speed marathons but rather short sprints. It can quickly change gears and go from 0 to 60 kilometers per hour in a little over three seconds. It takes a massive amount of power to achieve a change in movement that fast. Power that it can only maintain for around the above-mentioned time.

If a cheetah tries to overexert itself and keep running at full speed past the 30-second limit, it runs the risk of overexertion, overheating, and ultimately, death due to extreme fatigue.

Distance a Cheetah Can Run

At their maximum speed, a cheetah can cover up to eight meters or 26 feet in a single stride — no problem. It can cover around one kilometer or a little over half a mile in a single sprint when running at full speed.

Cheetahs cannot run long distances due to biology. While they are built to move at mind-blowing speeds, their bodies are not built with the same power and endurance as their other cousin big cats, compromising their ability to go on long runs.

When one runs, one’s heart needs to pick up the pace in order to deliver blood and other nutrients to one’s organs quickly, as the need for them also increases with one’s pace.

However, one’s heart can no longer keep up at a certain point, leading to heart and other organ failures. The same story goes for cheetahs.

This is why cheetahs need to stop at a certain point to rest and allow their body to recuperate. It usually takes around 30 minutes for a cheetah to regain its strength.

Other Factors that Affect How Long a Cheetah Can Run

Running and rapid movements are no problem for the cheetah. However, just how long a cheetah can remain running at top speed and what speed it can maintain depends on a number of factors.

How Cheetahs Work Around These Limits

Because they know they only have a limited amount of time and energy to give chase, they use other talents to ensure their success in hunting.

They take advantage of their stealth and sneak up to the prey. This attempts to minimize the distance between each other as much as possible and allows the cheetahs to ensure that the distance they would probably have to run is well within their capabilities.

Timing is also of the essence in the cheetah’s hunting style as it detects just the right moment to jump on its prey to assure itself of a prize.

Sometimes, this does not work, and the prey might get away. However, the cheetah is not one to give up. Nevertheless, first, it really needs to wind down, get some rest, and try again later.

While the cheetah’s speed is undeniable and undoubtedly one of its greatest strengths, it also has its limits.

Because of the way it is built, it can only run short distances of around a kilometer in short amounts of time before needing to rest or risk dying of overexertion. This trait is attributed to various factors such as biological builds, environmental factors, and overall well-being.

However, despite its limits, this brave and ferocious cat can still give one a run for one’s money — or one’s life if you want to put it literally.