How Fast Do Gazelles Run? 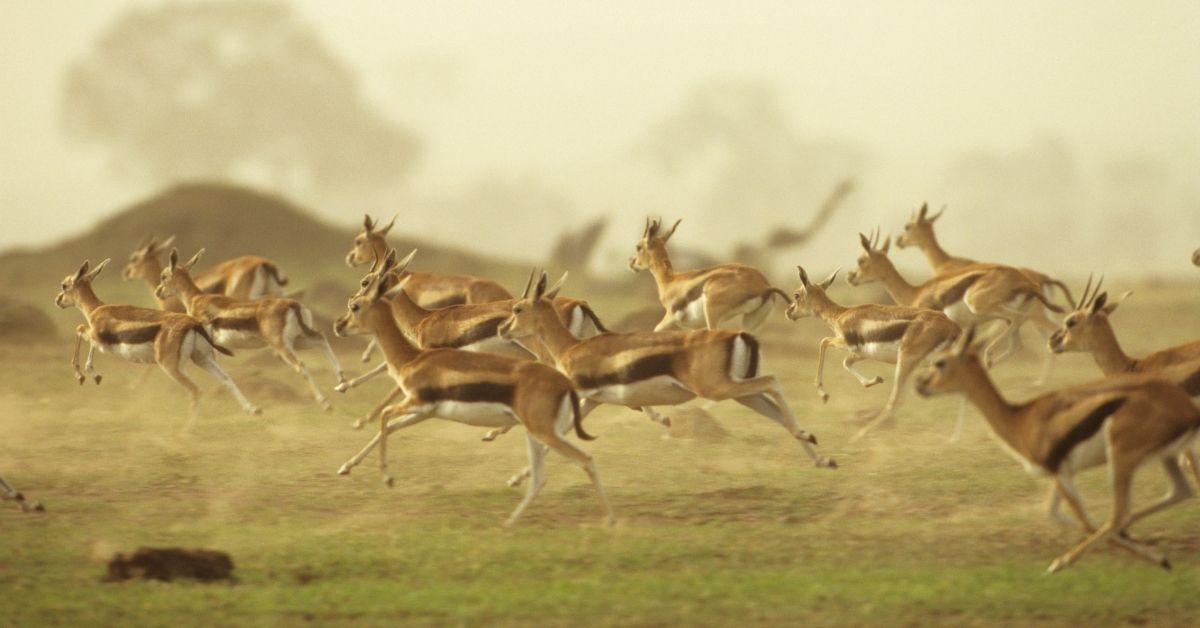 Gazelles are among the most sought-after prey in various landscapes. Despite this, they are well-known survivors. They can change their diet according to whatever food resource is available and limit their water intake. They can also evade and astound their predators with their top-notch speed.

Gazelles can reach speeds of up to 97 kilometers per hour or 60 miles per hour in short sprints.

When they’re not running at maximum speed, these animals can maintain speeds of around 48 to 64 kilometers per hour (or approximately 30 to 40 miles per hour)

How Do Gazelles Run So Fast?

Gazelles are able to cover so much ground when they run largely due to the way they move.

When gazelles run, they appear as if they are leaping forward — an action referred to as “stotting.” This action involves propelling the gazelle’s body up into the air using all four feet. Some people also refer to this as “pronking.”

This makes it a tricky little thing to catch and proves to be quite the challenge for even some of the most fearsome predators out in the wild.

This motion, paired with the animal’s light feet, allows it to cover a lot of ground over a single leap giving it an advantage over some of their fiercest pursuers.

Is a Gazelle Faster Than a Cheetah?

Despite its speed, a gazelle is not faster than a cheetah. The cheetah, one of the gazelle’s most terrifying predators, is the fastest land mammal on earth.

This speedy cat greatly overpowers the gazelle in speed boasting of rates of up to 130 kilometers per hour or roughly 81 miles per hour.

If it were just a matter of speed, the cheetah would always win. However, the gazelle can outmaneuver this large cat and save itself from ending up as big kitty chow.

What do Gazelles need to Run From?

Gazelles have several predators, including some of the most terrifying predators that walk the face of the earth.

They can encounter predators such as cheetahs, wild dogs, leopards, hyenas, lions, and jackals in the wild. These predators may attempt to hunt these animals to feed themselves and their young.

However, one of their greatest predators is still humans. Humans continue to hunt and kill these defenseless animals for sport and other reasons, significantly damaging their already dwindling numbers.

As of the latest update, these animals are currently categorized as Critically Endangered species whose numbers continue to follow a downward trend.

However, the gazelle has a few tricks up its sleeve to avoid being these beasts’ next meal:

Some of the gazelle’s predators are among the fastest predators that walk the face of the earth, with speeds reaching up to 130 kilometers per hour (80 miles per hour).

Having said that, simply running away as fast as possible probably will not work against them. To avoid ending up in the predator’s belly, the gazelle utilizes evasive techniques in conjunction with its speed.

To avoid getting caught, the gazelle runs at full speed and moves from side to side in a zig-zag motion to try and confuse the pursuing predator and throw it off its tail.

Their pronking motions can also add to the complexity of their movements and confuse the predator even more.

Also, while gazelles may not run as fast as their predators, they can run for much longer lengths of time.

To avoid being successfully hunted, all the gazelle needs is to confuse its predator and maintain a steady lead ahead of its pursuer.

Suppose the gazelle is successful in doing so. In that case, the predator will eventually get tired or overheat and may give up the hunt entirely, allowing the gazelle to escape.

On average, gazelles can maintain a sprint for around 15 to 20 minutes, while some predators can only run for about less than a minute or so before their body heats up. Then, they stop or collapse from the exertion.

While there aren’t rankings for the most formidable prey on earth, if there were, the gazelles could literally give one a run for their money. They can reach and maintain top speeds for more extended periods of time and run circles around even the most fearsome predators in the wild.

Despite various threats, these intelligent animals can utilize their speed and many other talents as well as their herd numbers to survive.