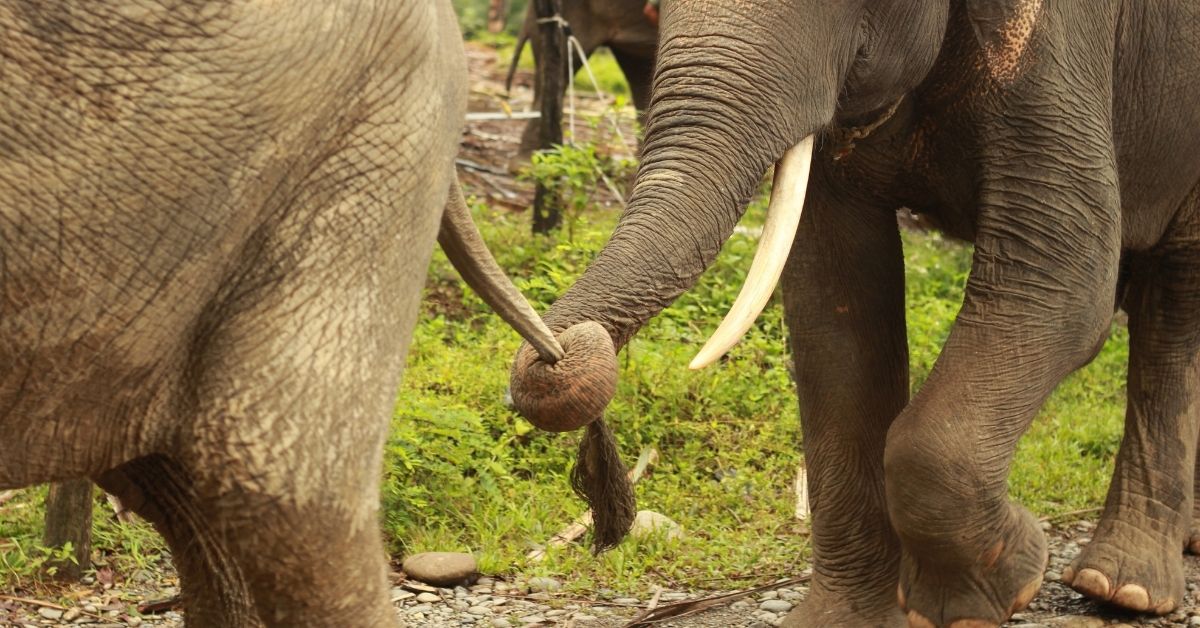 We have all seen pictures of elephants in a long line, holding tails, but does this behavior really occur in nature? Or is it merely a cute gimmick taught to captive elephants?

Circuses have certainly played a role in boosting this image of a procession of elephants joined from trunk to tail.

While elephant tail holding does occur in the wild, it is not frequently seen and probably not as often as perpetuated by the media and film industries.

Between Mothers and Calves

Elephants are emotionally intelligent beings. Their babies will grab onto their mother’s tail when they feel vulnerable, just like we would take the hand of a child when crossing a car park. The intriguing question is: does it have a function or is it more of a supportive touch?

When a herd is faced with danger the adults surround the younger members. They flee away as a tight unit, generally accompanied by stampeding, trumpeting, and overall chaos.

Holding onto a family member’s tail might ensure that a young elephant is not left behind during the confusion. It may slow the mother down when she is moving away too fast or assure her that her baby is with her.

It is very cumbersome for such a large animal to turn around to check whether her calf is still following, and so a gentle tail tap can be used to check its whereabouts or to gain its attention.

It is unrealistic that newborn calves hold on to their mother’s tails, as they do not have sufficient control over their trunks for the first few months of their lives.

Like all muscles, an elephant’s trunk has to be trained to move in precise motions and takes practice for them to aim at objects and grasp them. It is more likely that while the mother is concentrating on her newborn, her second oldest calf would clutch onto her tail.

Just like a parent would steer a child with a guiding hand on their shoulder, adult elephants have been seen directing younger elephants by their tails.

Elephants spend a lot of time playing, this is where they learn their fighting technique and test their strength. One young elephant might grab at another’s tail to slow it down when high-tailing it out of the game.

A female is only receptive for 3-5 days each year. Because of the relatively short period to mate, male competition is expectedly high.

The females run away from the males initially as they give chase. She won’t stop for younger bulls but slows down to let a mature bull mount her. They will mate several times during this period.

The big male will then hang around her for a few days longer, guarding her to ensure that no one else takes the opportunity to mate with her. During pursuit and after copulation the males may be seen holding her tail as part of the guarding behavior.

Elephants seldom walk in single file but stick close together in loosely clumped groups, rushing towards each other when startled. One exception is when they cross a deep river, the best route is picked by the matriarch and the rest follow close behind.

Tail holding has been witnessed during these instances in a single-file parade. Tails are held stiffly above the water and grasped by the elephant behind.

Elephants love to frolic in the water and are generally very competent swimmers, but young members are still at risk of a crocodile attack or being swept away by strong currents. So the procession is most likely a physical ‘helping hand’ to weaker individuals in deep, dangerous waters.

Yes, Elephants do occasionally hold each others’ tails, but more interesting is the question; why do they do it? I suppose you could also ask why do parents hold their children’s hands? Why do teenagers hold hands at the movies? Why should you offer a hand to an elderly person walking down the stairs?

Elephants are intelligent beings capable of fascinating emotional depth. The short answer is that they probably grasp tails for the same reasons that we hold hands, to provide physical assistance, offer emotional support, or as a sign of affection.

In an overwhelming and chaotic situation, it is a way for us to keep our loved ones close and offer reassurance.

Like all animal behavioral assessments, mannerisms are observed, recorded, and a sensible conclusion is deduced.

However, short of teaching an elephant to talk, there will always be an element of guesswork as to why elephants hold each other’s tails. Is that not what makes wild animals so intriguing to us? While it is essential to understand the natural world around us, some elements are better left retaining a touch of wonder.