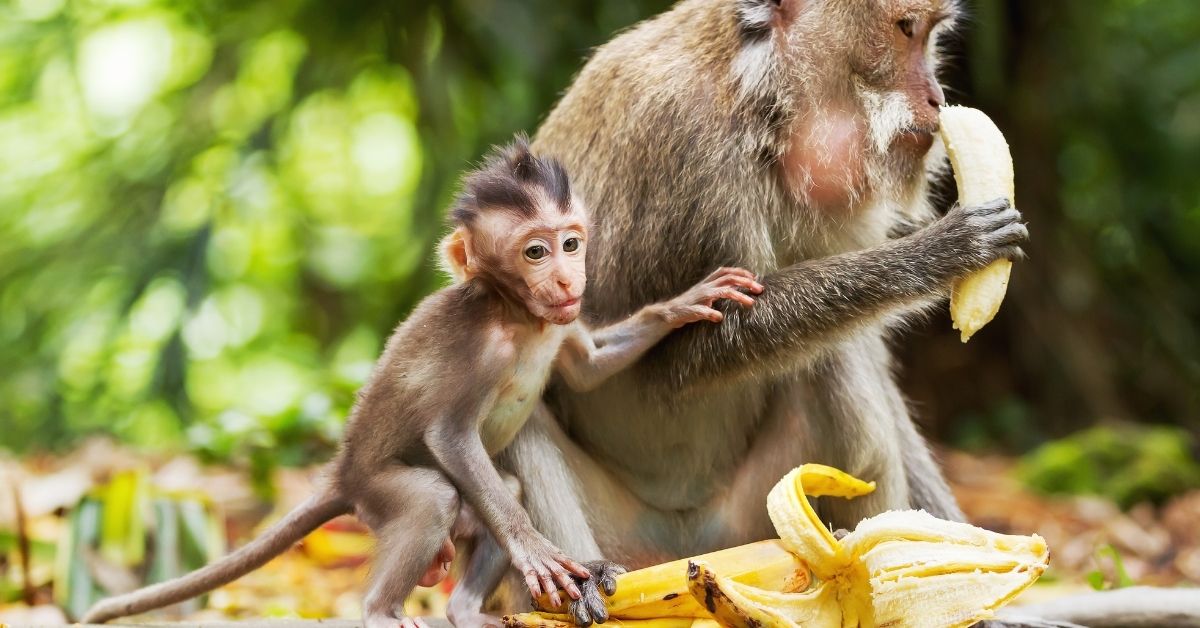 It is a well-believed concept that monkeys go nuts for bananas. Pop culture references often portray these curious primates fantasizing and going crazy for these curved, yellow fruits.

While it is true that monkeys eat bananas, they usually consume them (as they do other food) in a different manner as we do. This brings up the question, do monkeys peel bananas before consuming them?

Monkeys are more than able of grabbing and peeling bananas without the help of others due to their two, capable, nimble hands.

In addition to that, much like humans, monkeys do not necessarily enjoy consuming the hard, fleshy peel of bananas. As a result, these primates are often seen removing the peel of the bananas before chowing down on the white insides.

How Do Monkeys Peel Bananas?

Did you know that monkeys often peel bananas quite differently than humans do?

While we may share a common dislike and non-consumption of the banana peel, monkeys peel bananas in a different way.

We, humans, often peel bananas starting from the harder stem portion and move our way downwards as we consume the bananas’ fleshy, white meat. This is the method almost all of us are used to and practice on a day-to-day basis.

However, monkeys peel their bananas in a variety of ways, depending on their mood:

This is not as common as the next method but is still sometimes utilized by our furry little monkey friends.

The “Upside Down” Method

Many consider this the lesser-known, “correct” method of opening a banana for two reasons:

For one, the stem is a convenient handle and allows for a better grip on the fruit as opposed to the smaller brown tip that we usually hold on to when eating bananas.

And second, this method also allows us a better opportunity to consume the entire fruit as opposed to the usual method that often discards the portion closest to the brown tip.

However, this method can get a little bit messier as pinching the brown tip of the banana with exertion cause some fruit to get squished out and may leave one’s hands stickier than they would be when peeling from the stem.

The “Bite Through the Middle” Method

Monkeys can also sometimes be seen biting through the peel to create an opening. This is usually done right in the middle of the banana. From this opening, they then grab the exposed peel and remove it from the rest of the banana.

This method is certainly not as popular as the previous methods mentioned above. However, monkeys can certainly make use of it from time-to-time thanks to their extremely sharp teeth.

The ones who do use this method are probably monkeys that are encountering the fruit for the first time.

They would take a bite out of the banana as they usually would with any of their other food and realize that the peel isn’t really as appealing (pun intended), and that the insides were much better. This discovery leads them to eventually remove the peel to gain access to the insides.

They may even use this method to eat the white fruit off the peel instead  — completely disregarding the action of peeling.

The “Squeeze and Pop” Method

Another way that monkeys extract the delicious white flesh of the banana is by squeezing on one end until the purely naked white insides pop out of the peel ready for the consumption of the monkeys.

This is arguably one of the least popular methods monkeys “peel” bananas but it is utilized by some rather rambunctious few.

While monkeys are more often seen eating the white insides of bananas, they can actually eat banana peels. It all depends on the situation.

In cases of starvation, monkeys can become so overcome that they skip the banana peeling altogether. Instead, they immediately chow down and consume the whole banana, peel and all, to ease the pang of their hunger.

They can also choose to eat banana peels if there is a lack of other fruits and food to eat. They can either eat the peel with the fruit altogether or salvage banana peels that other monkeys may have previously discarded.

However, in most circumstances, monkeys do prefer stripping the banana of its peel before consuming the delicious white insides of this fruit.

Do All Monkeys Peel Bananas?

Not all monkeys peel bananas. Whether or not they do remove the peel prior to chowing down on this delicious yellow fruit depends on what kind of habitat these monkeys reside in.

In the wild, monkeys don’t really mind if the fruit is peeled or not. They just chow down and bite into the bananas as they would any other food they consume. Thus, monkeys in the wild aren’t really seen peeling this yellow fruit.

However, monkeys living in close proximity to humans and human settlements picked up this curious habit and learned to peel bananas prior to eating them.

These intelligent primates probably learned to peel bananas by observing humans and decided to copy it. Eventually, they came up with many different ways to remove the peel, and in turn, their offspring and the generations that came after them took to this practice as well.

While these adorable primates may not have the same kind of relationship with bananas as we have all been led to believe, monkeys do still enjoy the sugary pleasures that is the banana fruit.

With peel, without the peel, just the peel — however they choose to enjoy it, all bananas are delicious and considered to be great treats for our furry little monkey friends.