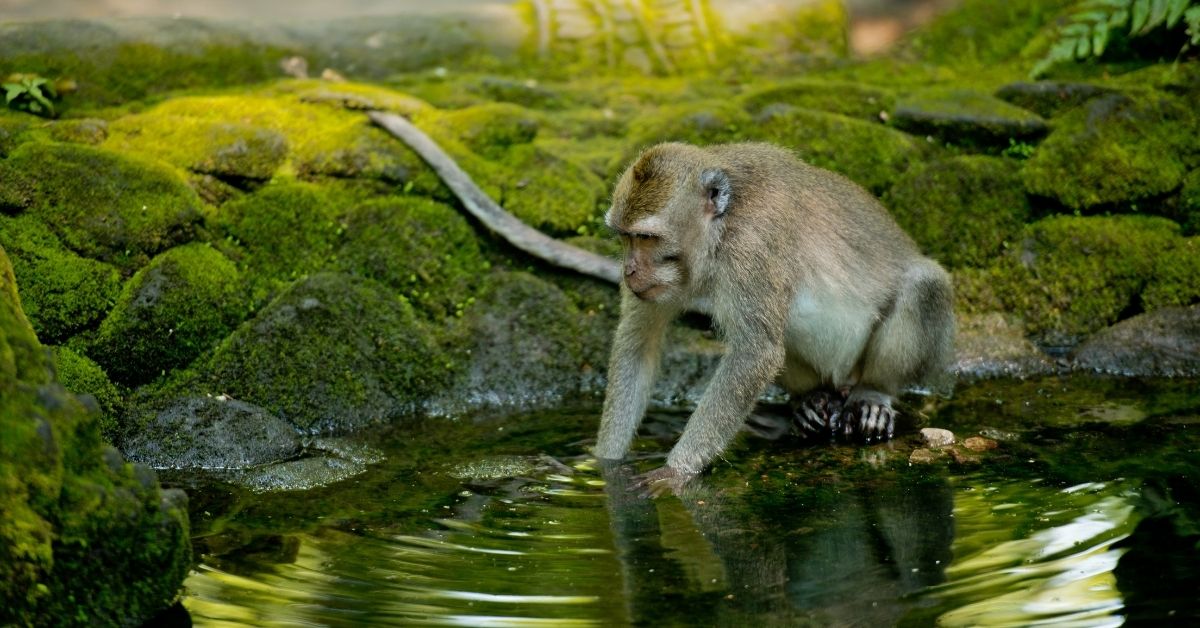 Whenever you picture a monkey, you would often imagine them holding onto a banana or some other fruit. It is also widely known that these primates can also survive on nuts, fruits, as well as insects. However, these curious animals have also been seen holding onto other items such as fish leading to the question: Do monkeys eat fish?

Monkey diets are popularly known to consist mainly of fruit, vegetation, nuts, and the occassional insect. However, some monkeys, like most animals do, can adapt and survive on other food sources like fish.

While some monkeys do consume the occassional fishy treat, they do not consume fish as their main food source. Instead, they still consume a main diet of nuts and fruits and consume fish only on an occassional basis.

These primates aren’t picky either and can consume both fresh, live fish and dead fish brought in by the tide.

Fish-Eating Monkeys of The World

The consumption of fish certainly is an uncommon practice among wild monkeys. These fish-eating monkeys are usually far and few and only located in certain areas — usually in rural areas in Asia.

Here are some examples of fish-eating monkeys and where you can find them:

These monkeys first launched into worldwide recognition due to their practice of washing sweet potatoes in the water before consuming them. This human-like trait made them an instant tourist attraction as tons flew to the island to witness this uncommon phenomenon.

Now, these monkeys are well known for wading in the waters not for washing potatoes but catching and eating fish that the tide brought onto the shore.

Many island inhabitants were shocked when they first witnessed these monkeys biting down on the discarded fish and are now working towards increasing awareness and spreading word of their unusual fish-eating monkeys as their island’s newest tourist attraction.

Long-tailed macaques are common inhabitants of Indonesia and are well known for their incredible ability to adapt to their environments and obtain food for survival.

These amazing primates possess great foraging skills that sees them easily taking food from their surroundings or the occassional unsuspecting tourist.

As they continue to adapt, these silver-haired macaques took to wading into shallow rivers that surround their habitats to catch small fish for food.

These monkeys are also known to forage for crabs, frogs, and other things close to the rivers so it would make sense that they would eventually wade into the waters and explore possible food sources there.

The macaques that reside in the Kamikochi mountainous region are among some of the most unusual primates in a sense that they reside in one of the coldest habitats that is known to monkeys.

These freezing temperatures can often make it hard for the Kamikochi macaques to find food due to the scarce fruit and vegetation. Thus, these adaptive and resilient primates have taken to the waters to search for other sources of protein.

They are also among the small population of monkeys that actively go into the water to catch fish fresh instead of waiting for them to be brought in by the tide.

These monkeys are often seen chowing down on salmon or trout that can be found in the area.

Do Monkeys Hunt for Fish?

Monkeys that eat fish have found different ways to obtain this alternative source of food. However, going fishing isn’t without its challenges as most monkeys do not swim and have an innate fear of drowning and predators that may reside in the water.

So to get their hands on this unusual snack, some monkeys wait for the fish to come to them while others actively go out and catch their own fresh fish.

If their habitats are near the shoreline, the monkeys usually wait for the tide to bring in dead fish from the sea. These patient primates then proceed to collect them from the shore to eat.

While it is well known that monkeys have a certain level of dislike for water and tend to avoid it when they can, some monkeys can dive into shallow waters to catch fresh fish for themselves. These are usually monkeys without much other food sources such as those residing in cold environments.

Why do Monkeys Eat Fish?

For the longest time, popular opinion would dictate that all our monkey friends need to survive are high treetops with fruits paired with the occassional diet of nuts and insects.

However, due to the ever continuous change in habitats and environments brought on by dwindling habitats and climate change, these monkeys have had to adapt and change to survive.

The sudden change in diet such as the inclusion of fish and other meat sources is one of those adaptations in response to the depletion of their usual food sources brought on by the changing of the seasons and continuous loss of habitats.

Do Monkeys in Captivity Eat Fish?

Monkeys usually consume fish when there aren’t many other food sources available. So monkeys kept in captivity usually aren’t fed fish or other meat sources save for an exempt few.

Most of the time monkeys in captivity are fed a mixture of fresh fruits and nuts with an occassional addition of insects.

However, as monkeys are omnivores some institutions may throw in an occasional small meat source such as small birds or a fish or two.

Some institutions also make use of a manufactured premixed food to ensure that their monkeys completely obtain all the nutrients that they need.

While it may certainly be an unusual phenomenon, monkeys are omnivores and do consume the occassional fish and other meats. However, despite their indulgence in these types of food their main source of food are still fruits and nuts.

This adaptability in the monkey’s diet is a testament to this creature’s intelligence and capabilities to survive in whatever nature has to throw at them. With this, we can be sure to expect other surprises from this creature as our world continues to change with time.