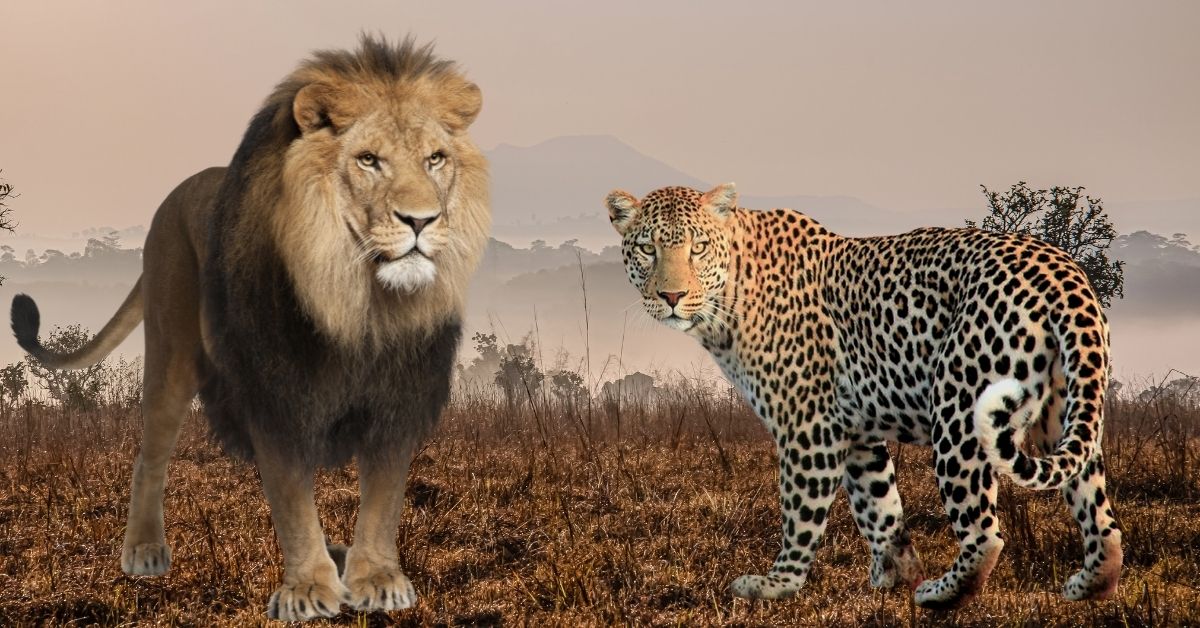 Lions and leopards occupy the same space but stay away from each other for the most part. However, these two apex predators may eventually bump heads to establish dominance and secure food sources. Could it be possible for the stronger predator, the lion, to hunt and eat the weaker leopard?

Yes, lions do eat leopards and there have been many documented cases of the lion attacking and consuming the leopard.

However, while lions going after leopards and the two fighting it out can be expected in the wild, lions eating leopards does not usually happen.

Whenever lions and leopards battle it out, the lions end up killing the leopard and leaving its carcass to rot or for other scavengers to consume.

However, there are rare occasions that the lion can track down, kill, and consume the weaker leopard.

Why Would a Lion Eat a Leopard?

Now that we have established that lions eat leopards, let us explain why.

First of all, the lions are incredibly territorial beings. Like most predators, they do not like the presence of other predators in their areas as this automatically creates competition for resources such as prey for food, shelter, and water.

For the most part, leopards do go out of their way to avoid lions altogether because of the threat they inherently bring to the leopard’s safety.

To achieve this, they hunt smaller prey and avoid the lion’s usual food sources altogether to avoid conflict with the bigger, stronger predator.

However, the simple presence of the leopard is already considered a significant enough threat or reason for the lion to attack.

Thus, once the leopard is spotted, it can trigger the lion to initiate an all-out offensive attack on the weaker predator to establish dominance and superiority over the area and eliminate threats to its security and prey.

They can also attack the leopard as a form of retaliation or security measure.

Lion cubs are highly vulnerable to leopard attacks, and the latter can come up and kill these poor cubs to eliminate competition and diminish potential threats to their own lives.

As a result, angered or protective lions can come up to the leopard in the cubs’ defense.

These attacks usually lead to the leopard’s demise and possible consumption by the firm, fearsome lions.

The lion can also attack leopards during times of extreme famine.

Many reasons such as drought, famine, and relocation can lead the lion’s usual prey to diminish in numbers, making them incredibly hard to obtain.

In order to avoid starving to death, the lion is now forced to expand its scope in prey and hunt just about whatever it can find for food.

If it finds itself in extremely desperate measures, the lion can turn to hunt other carnivorous predators such as the leopard in order to obtain some sort of sustenance.

Lions do not eat leopards as often as other animals for many different reasons.

First of all, leopards cannot provide the lion with much nutrition. Like most other predators, lions hunt herbivores because they provide more nourishment for the predator and generally taste better due to the large amounts of fat in their bodies.

Leopards, who are carnivores, have tougher meat due to their increased muscle mass and smaller fat compositions. As a result, they do not provide as much nourishment to the lions as their usual prey does.

In fact, to obtain the same level of nutrition that it would get from its usual prey, the lion would have to consume around ten times more leopard meat.

This is primarily due to the fact that carnivore meat, such as the leopard’s, contains a significantly smaller amount of fat. This lack of fat can lead to dietary deficiencies for the mighty lion. The leopard also has a much smaller amount of meat compared to buffalo and other prey.

Another reason why lions do not usually hunt leopards is that they are not as accessible as other prey.

Leopards are often hard to spot in the wild because of their solitary nature. They are also much harder to come by, mainly due to their small numbers.

Aside from that, they are more active during the dark, making them harder to spot because their rosettes or spots allow them to blend into their surroundings.

Lastly, leopards put up a much stronger fight, unlike the lion’s usual prey.

Lions’ hunting success rates usually range around 17-30% depending on the number of lions involved in the kill — and that is with herbivores that cannot really retaliate. Can you imagine the chances of success with an animal as fierce as the leopard?

Usually, the leopard can easily be overwhelmed by the lions’ numbers or a sole lion’s strength. However, it can still put up a good fight, leaving the lion with a few injuries. They also have greater chances of escaping than other prey.

While lions can kill the leopard, they usually prefer easier targets that are easier to locate, do not require as much effort to take down and provide better overall nutrition and satisfaction when eaten.

Along with lions and other big cats, Leopards are apex predators and sit at the top of the food chain. Due to this unique privilege, they do not have to worry about being hunted.

However, on rare occasions, they can find themselves on the other end of the spectrum being hunted as prey, especially by the dominant lions.

Usually, when lions do hunt leopards, they go for leopard cubs. This is their way of killing off the potential competition before they mature into real threats. Lions are responsible for about 70% of leopard cub deaths.

Injured, elderly, or weak leopards can also find themselves getting hunted and consumed by starving packs of lions in the wild. Actually, even healthy adult leopards are not immune from lion attacks done by the latter to secure dominance and superiority over the land.

Aside from lions, leopards can also find themselves at the mercy of other predators such as humans, tigers, and wild dogs.

Leopards typically avoid all contact with the lion because they know that the lions are much more robust, have greater numbers, and can easily overwhelm and kill them simply for existing.

However, leopards can attack, kill, and sometimes consume lion cubs. Healthy, adult leopards may even kill or cause significant harm to sick, injured, or elderly lions who do not have much fight in them.

Leopards are considerably smaller and weaker than the lion and will not beat the lion in a physical confrontation, more so kill it. However, they can use their size and speed to their advantage and escape the fight altogether while getting a few hits in.

Lions and leopards share many habitats, and as territorial predators, this invites many opportunities for conflict and competition. As the stronger predator, the lion rises above and eliminates the leopard, sometimes eating it so as not to waste good meat.

However, while it may not be as common, it is just another event part of the circle of life.