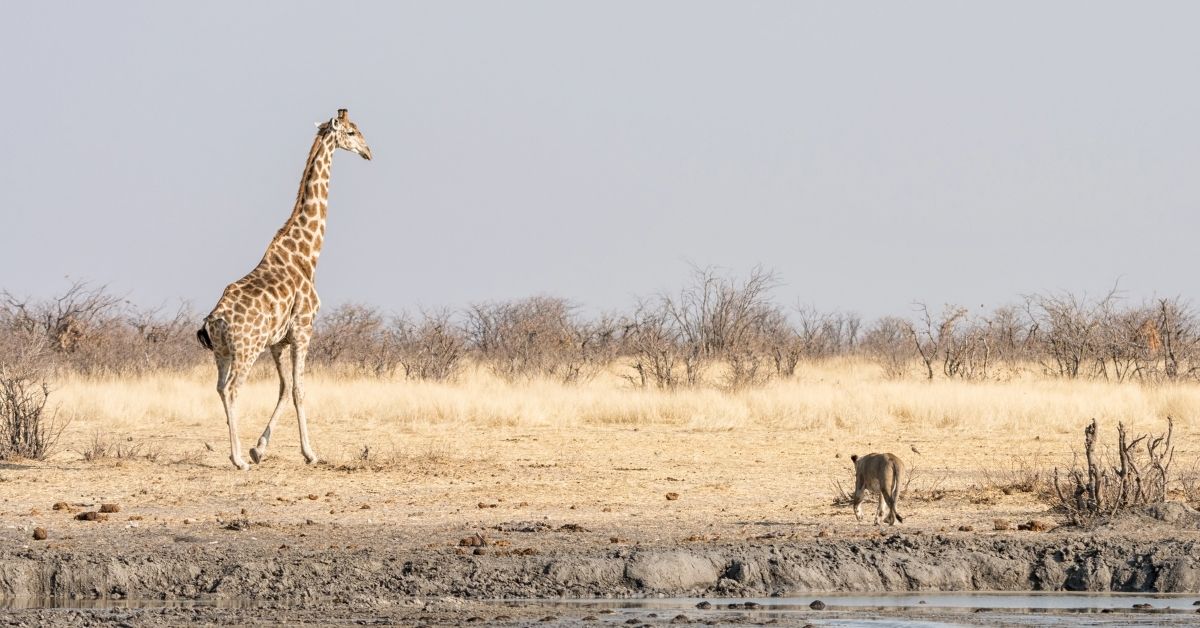 There are many animals in the savannah, and even though some of them, like giraffes, are much larger than lions, lions still remain the most ferocious predator and the king of the jungle.

But does that mean lions eat giraffes?

Yes, lions will occasionally attack and eat giraffes. However, lions rarely attack giraffes because even as the king of the jungle, a giraffe could seriously maim or kill a lion.

Could a Lion Kill a Giraffe?

Giraffes are very large animals and can pose quite a threat to a lion.

A solo lion wouldn’t dare to take on a full-grown giraffe; even a baby giraffe could be a challenge for a full-grown lion as they are already two meters tall when born.

However, a pride of lions could kill even a full-grown giraffe, although this would not be without great difficulty and risk.

Lions have been known to attack and kill giraffes. Being the tallest animal in the world, you don’t need to fear much, and for the most part, this is true; however, in some instances, you may need to fear a pride of lions.

A kick from a giraffe could easily kill a lion. For this reason, when a pride of lions is attacking a giraffe, it is usually the sick and weak or young giraffes they are targeting. In some instances, they will target pregnant giraffes also as they struggle to fight back due to the pregnancy.

A giraffe is an excellent meal for a lion, and given the right opportunity, a lion would not hesitate to attack, kill and eat a giraffe.

For lions, the easiest meal is always the best. Life on the savannah is tough, even for lions. Sometimes they have to go days without food. The main objective for feeding is to get the food that requires the least amount of energy.

An antelope is fast, a wildebeest may be dangerous, so if an injured or young giraffe were an option, this might just be the right choice for the lion.

How Can Lions Kill a Giraffe?

Lions kill giraffes by trying to take them to the ground, and then they can grab it by the neck and kill it.

This attack is quite dangerous for the lion because in order to get the giraffe to the ground, the lion must put itself in the most dangerous position, at the rear of the giraffe.

The giraffes’ defense against a lion is a kick with its hind leg. A kick from a full-grown giraffe delivers about 2,000 pounds of force; as you can imagine, this could do a lot of damage to a lion.

To try and prevent from being kicked, lions attack with a large pride; multiple lions grab onto the hind legs with both their claws and teeth.

The lions will stay in this position and try to tire the giraffe out; meanwhile, the rest of the pride will be jumping at the rear end of the giraffe to try and bring it down.

Young giraffes are a much easier target for lions, and even a solo lion or a pair of lions could take it down. With young giraffes, sometimes the lions go for the front legs as once they get the giraffe to its knees, it’s much easier to grab its neck.

How Can Giraffes Defend Themselves Against Lions?

The first line of defense a giraffe has against lions is its height; this is why baby giraffes are almost the main target of lions.

It is also why giraffes almost never lie down and why baby giraffes are born standing up.

If a giraffe were to lie down, it would become an easy target for a lion, as it could quickly grab it by the neck before the giraffe even had a chance to stand up.

Instead, giraffes only sleep five minutes at a time by curling their neck.

The next line of defense is their powerful kick; a giraffes kick could decapitate a lion.

Giraffes can deliver powerful kicks with both their front and hind legs and can also kick out to the side.

As you can see, giraffes can be very dangerous to lions, and this is why lions try to avoid them and only attack the young or sickly giraffes.

Lions do eat giraffes, but it is not the main part of their diets. It would take the full pride of lions to take on a full-grown healthy giraffe. However, one or two lions could kill a baby giraffe.

Lions take a great risk in attacking a giraffe as it could easily end up getting itself killed by the giraffe instead.