Do Lions And Tigers Live Together? 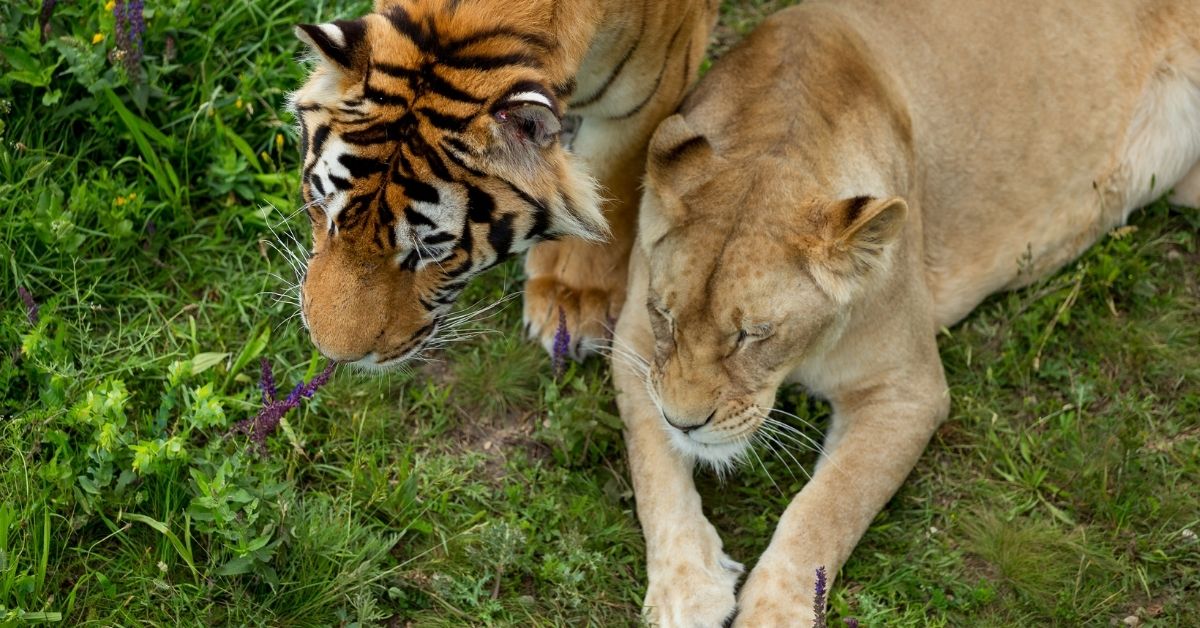 Lions and tigers are the topics of many discussions amongst fans of big cats. The most popular topic is whether a lion or a tiger would win a fight.

The opinions are divided, but another topic also comes quite close to the top. Can these two species live together in harmony?

Do Lions and Tigers Live Together in the Wild?

No, lions and tigers do not live together in the wild. At least not anymore, although there were a few talks about introducing them in the same regions.

Lions and tigers in India inhabit a similar environment. However, while Asiatic lions can only be seen in one place, the Gir National Park in Gujarat, tigers seem to roam more freely around India, although no tigers were found in this National Park.

Both tigers and lions are very territorial, and although lions are very social cats living together in prides, they would consider a lone tiger a danger to their young and their food sources.

Can Lions and Tigers Live Together in Captivity?

Yes, lions and tigers can live together in captivity, although they should be introduced to each other while still young.

Because of the competitive nature of both species, there still could be a danger of lions and tigers fighting if put together without preparation. There were multiple instances where a lion or a tiger would attack and wound or kill the other.

Many tigers and lions came to live together in a zoo or a reserve and even produce offspring known as ligers, or tigons. Tigers reared in captivity seem to adapt to life within a pride, adopting lions as offspring, siblings, and even mating partners.

Do Lions and Tigers Fight?

Lions and tigers don’t fight in the wild because their paths never cross anymore. They do, however, sometimes fight in captivity.

While keepers make sure that both species are kept in the best possible conditions without harming each other, fights sometimes erupt. It is mainly because of the specific nature of tigers and lions. In the wild, they both would consider each other competitors and try to get rid of one another to better their own chances of survival.

Even though kept in captivity, tigers and lions are not tame animals like house cats. They still can have a mind of their own, and their instinct would be the first thing they would listen to if they feel threatened.

Do Lions and Tigers Live in The Jungle?

Yes, lions and tigers live in the jungle. Although the majority of the lion population resides in Africa, where they inhabit savannas and grasslands with small trees and shrubbery, there is a small population of lions living in the jungle in India.

It is the same type of jungle where one can see a tiger. However, despite both species inhabiting similar environments, they don’t live near each other anymore.

Once upon a time, before poachers and habitat loss pushed tigers and lions’ numbers down, both species, especially Caspian tigers and Asiatic lions, used to share hunting grounds in the jungle.

Can Lions and Tigers Mate?

Yes, lions and tigers can mate. As they are both species from the same Panthera family, their semen and egg cells are compatible. In fact, there are many lion and tiger hybrids, although all of them are produced in captivity.

A cross between a male tiger and a female lion is called a tigon. It would bear the resemblance of both parents, like tiger stripes and, in the case of a male tigon, a short lion mane.

Tigons are usually the same size as their parents, sometimes smaller, but never bigger. They can also further reproduce, which was thought impossible before the 1940s.

A cross between a male lion and a female tiger is called a liger. Like a tigon, a liger resembles its parents with tiger stripes and lion body color. The difference is with the size. A liger is decidedly bigger than its parents and is, in fact, the biggest living feline in the world. It also likes the water, just like a tiger.

Although many people are interested in the outcome of a fight between a tiger and a lion, their living together also inspires multiple interesting questions.

Both Panthera species can coexist in captivity and even produce offspring, but if they ever met in the wild, their individual behavior could cause trouble.