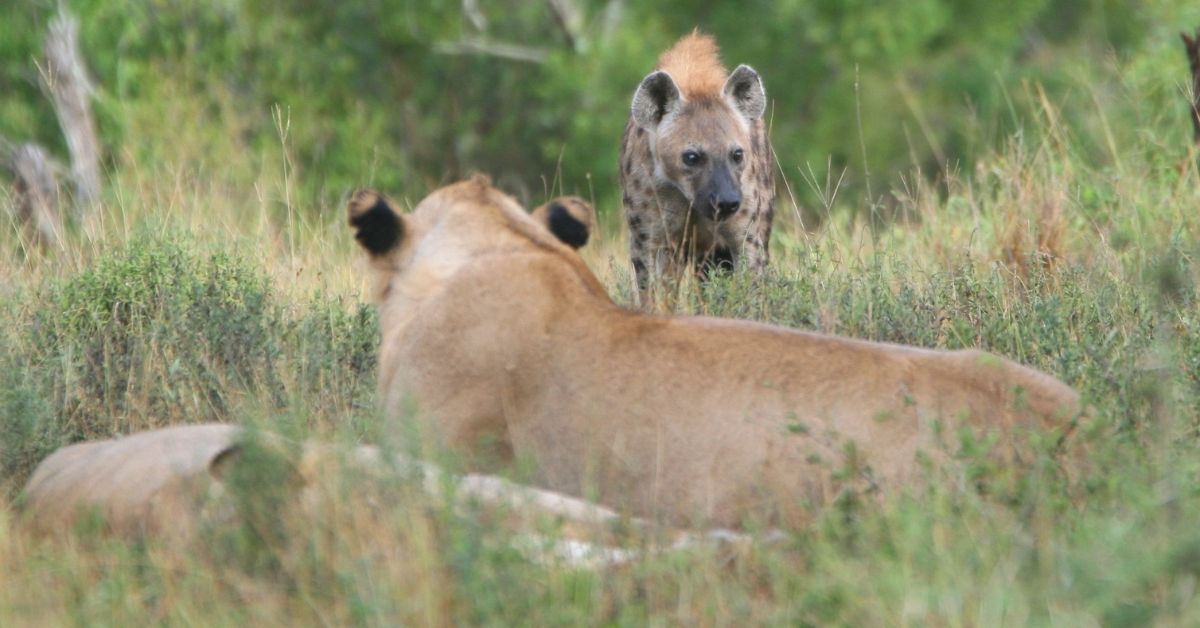 Africa is home to the fiercest animals known to man, like the lion and the hyena, for example. Two terrifying predators, both with great strength and numbers. These two have one of the most well-known and established rivalries in the wild.

While the lion may have the upper hand in strength and size, could it be possible for the roles to be reversed? Could the hyena eat the lion if it had the opportunity?

Predators usually don’t eat other predators. However, hyenas have been found to occasionally chow down on some lion meat despite it being a sort of unusual choice of sustenance.

Lions are apex predators. They can easily overpower and beat a lone hyena or even a small pack of them in typical situations. Thus, the hyenas tend to stay away from these enormous beasts.

However, weak, dying, vulnerable lions or lion carcasses are fair game to the hyena as this fierce predator can then pounce, kill, and consume the once-mighty cat.

Why Would a Hyena Eat a Lion?

As predators, hyenas and lions can often find themselves in conflict over various reasons, like the ones listed below.

As two predators occupying the same territories, the lion and the hyena often find themselves unwillingly sharing the same prey located in the shared land.

As territorial beings, this can spark competition and conflict between the two animals leading to deadly face-offs that could end in the demise of one or the other.

There have also been cases of hyenas taking kill away from lions and vice-versa, adding fuel to the already intense rivalry between the two.

While the lion comes out as the most probable winner of these face-offs, the hyena can still stand a chance at overwhelming the lion and killing the beast. After which, it can then consume the remains of the once mightier predator.

Aside from shared prey, these two predators can fight for something as simple as existing in the same territory.

In an attempt to secure themselves and their lands, hyenas can catch the lion by surprise and kill it. By getting rid of the lion, they assume dominance over the land and its resources.

Famine and lack of prey in the wild are not as uncommon as one may think. There are times when the predators’ usual prey may migrate to other lands due to changing seasons or loss of habitat.

Given that the lion was experiencing the same famine, this big cat would be significantly weaker than usual. This gives the hyenas an excellent opportunity to hunt and overpower the lion to survive.

Lions are the king of beasts for a reason. They are exceptionally large and robust, with the ability to take down even a small pack of hyenas by themselves.

Lions also travel in prides, making them even harder adversaries and stronger competitors in the wild. This places a significant threat to the safety of all those around them.

To eliminate potential threats and get a good meal at the same time, hyenas can move to attack lion cubs. These cubs are small and defenseless against the hungry hyenas. All hyenas have to do is wait until the cubs are left unattended and pounce.

This isn’t a one-sided practice, though. Lions are also known to do this to hyenas and other predators.

Usually, hyenas are no match for lions. These large cats are twice as big and three times as heavy as a single hyena. If they were to fight one against another, the hyena could certainly end up dead.

This is mainly why hyenas don’t usually go hunting lions for food. Even ill, old, or injured lions can be more than a little overpowering to a single hyena.

However, what the hyena lacks in strength when alone, they make up for in cunning and numbers. Hyenas never go after a lion in a one-on-one setup. Instead, they attack as a pack allowing them to overwhelm the lions with their collective strength.

How Many Hyenas Does it Take To Kill a Lion?

Generally, it will take a group of around 8 to 10 hyenas to take down a single, healthy lion. Maybe more, maybe less. It all depends on the tactical approach.

Male lions are exceptionally stronger than female lions and thus might take a little bit bigger number. Due to their vulnerability, weaker, injured, or younger lions might require a smaller group.

How Do Hyenas Attack Lions?

Ideally, a single hyena or a small group of hyenas can slowly approach the lion head-on in an attempt to distract the wild cat. As they do that, another hyena or group of hyenas will attempt to catch the large cat by surprise by attacking it from behind.

From here, the whole group attempts to bite the most sensitive parts of the lion, such as the ears and tail. Since hyenas have exceptionally strong bite forces, this will be enough to hinder the lion.

Suppose they are unable to kill the king of beasts outright. In that case, they will attempt to cause as much trauma to the cat by biting down and causing severe bleeding until death.

Are Lions Afraid of Hyenas?

Despite their ability to potentially cause harm to the large beast, lions do not fear hyenas in any form or way.

Lions are apex predators, a privileged status given only to those who rest at the very top of the food chain. They are also the king of beasts and are considered much bigger and stronger than the hyena.

Under normal circumstances, there is no way the hyena or even a pack of hyenas can take down a lion or a pride of lions in their prime.

Having said that, hyenas eating lions are extremely uncommon occurrences and only happen during the most extreme of circumstances.

Hyenas aren’t known for being picky eaters. They can indulge in a rare delicacy of lion meat from time to time. However, this is no easy feat as the lion is still the more powerful, more dangerous predator in the wild.

It would take a lot of guts and desperation for a hyena to approach and attempt to overpower the fearsome and mighty lion.