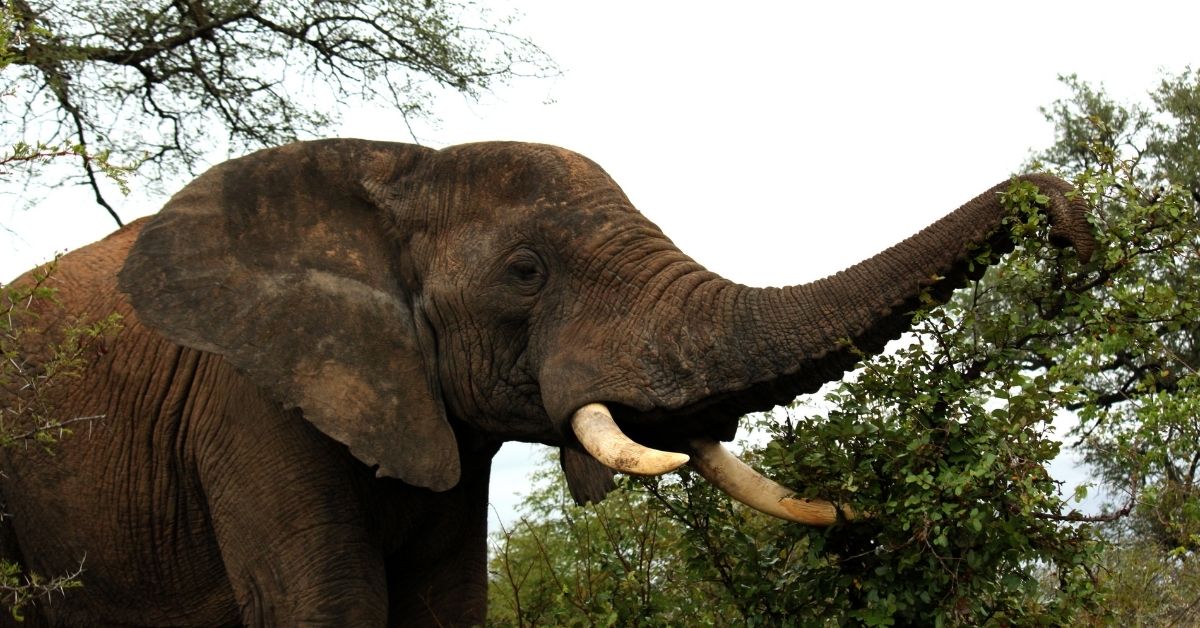 Elephants are well known for their herbivore diet. Image after image can be seen of them eating leaves, twigs, and other plants.

However, one can wonder how this humongous animal can blow up to such size and might only through a diet of plants. Could it be possible that these majestic elephants cheat on their diets and indulge in a little meat right under our noses?

First of all, elephants are herbivores. This means that they almost exclusively consume a wide variety of plants like fruits, grass, leaves, twigs, shoots, bushes and the like. However, there are a few instances wherein elephants have been spotted to stray from their usual diet.

Sometimes they may accidentally ingest some insects along the way. In other uncommon instances, they may even ingest eggs in bird’s nests while eating twigs or small branches from trees.

However in more extreme circumstances, they may even resort to eating meat but these cases are too few and far apart to be considered part of the elephant’s true nature.

There may be instances wherein elephants may accidentally ingest meat and other items that are usually not part of their diet in the process of consuming their usual food.

Insects, for one, are commonly involuntarily consumed by these unsuspecting giants when they consume grass, trees, and other plants where the insect may have taken shelter.

Birds nests containing eggs or even chicks may also be accidentally eaten by the elephants whenever they consume branches or trees.

Do Elephants Hunt Other Animals?

Elephants are far from hunters. They forage for food. But they aren’t, in any way, shape, or form, hunters.

Hunters or predators possess such a title because they mainly depend on the consumption of other animals for nourishment. As meat is not part of an elephant’s typical diet, they do not find it necessary to hunt other animals.

Actually, elephants are among the prey of some of the wild’s most fearsome predators such as lions, hyenas, tigers, and humans.

There have been a couple of documented cases wherein elephants were speculated to consume humans.

Before we get started on these cases, let us make it clear that humans are not a part of the elephant’s diet, nor are they even alternatives.

However, often due to the extreme harm that these animals have experienced at the hands of humans, they may turn to violence, themselves, and commit heinous acts against the humans.

Zurich Zoo once housed an elephant referred to as Chang. Chang had a strong reputation for being quite violent and unpredictable despite multiple efforts to try and get this elephant to relax and adapt to a life of captivity.

One day, a lady by the name of Bertha Walt visited the zoo and became convinced that she and Chang shared a strong connection. She longed to visit Chang despite receiving several warnings about the latter’s attitude.

However, Bertha was firm in her conviction that “animals were kinder than people.”

Eventually, Bertha discovered the entrance the keepers used to gain access to Chang’s enclosure and decided to go through it and spend the night with Chang convinced that the animal was lonely and only needed a friend.

She entered Chang’s enclosure bringing with her a loaf of bread as a friendly offering to her favorite animal.

She was never seen again. It was said that Chang consumed her and all her belongings that night as her clothes, belongings, and other proof of the event was found in the elephant’s poop.

This shocking story made the pages of several newspapers from all over the world and Chang was sentenced to be put down. Luckily, this elephant was saved by the successful pleas of his caretaker.

This same caretaker would later also be killed by Chang. While it is unclear as to whether or not Chang also ate his caretaker, the Sydney Morning Herald certainly implied so in their March 31, 1956 edition.

In a more recent example, a community in West Bengal, India were attacked by numerous elephants that raided their villages and trampled several people, killing them in the process.

While most of the villagers were Hindu and believed it a sin to kill the elephants, one murderous elephant was made the exception. The farmers agreed to end her life as she had already claimed 17 people’s lives and showed no signs of intending to slow down or stop.

It is said that this elephant only started to exhibit this violent behavior after seeing her offspring being chased by human farmers living in the area.

She was successfully taken down and was taken in for an autopsy. Some stories claim that only a piece of meat was found in her mouth indicating that she consumed flesh while most would say that she swallowed a whole human body which was later found still in her stomach.

It is important to note that most instances of elephants eating humans are mostly found in Asian elephants. Truth be told, there is virtually no evidence of African elephants attacking much less consuming humans.

Now that we’ve established that elephants may unintentionally consume meat from time to time, we now raise the question as to why these large animals aren’t considered omnivores.

Elephants aren’t considered omnivores because they do not consume meat for nutrition. All their meat consumption, if any, are accidental and unintentional occurrences that only happen because they were trying to consume their main source of nutrients – plants.

In addition to that, they are not biologically designed to consume meat. If an elephant were to somehow turn to eating meat, their body would not be able to properly digest it.

What Do Elephants Eat?

An elephant’s specific diet may largely depends on where it lives. That is, its diet is mainly affected by whatever food sources it can find in its surroundings.

African elephant diets compose of twigs, branches, and even whole trees. In this scenario, it is the adult elephants that can consume whole trees while the juvenile or younger elephants can survive on twigs alone.

These elephants’ tendencies to browse areas for trees and twigs to eat have earned them the peculiar nickname “browsers.”

On the other side of the world, Asian elephants habitats are mostly composed of grasslands. As a result, their diet is mainly compromised of grass, bushes, short trees, and other plants that grow on the ground.

Like their African counterparts, they also earned a title because of the way they graze for food on the ground. For this, they are often referred to as “grazers”.

Elephants are considered to be among the most intelligent and adaptive animals. However, it is very clear that they have not yet adapted the meat-eating lifestyle. Given the way that the animal is biologically structured, it is very doubtful that it will ever turn to the consumption of meat.

While there may be little accidents or violent outbursts here and there, elephants remain steadfast in their herbivore lifestyle and status. Sure enough, these animals would still choose grass over meat any day.