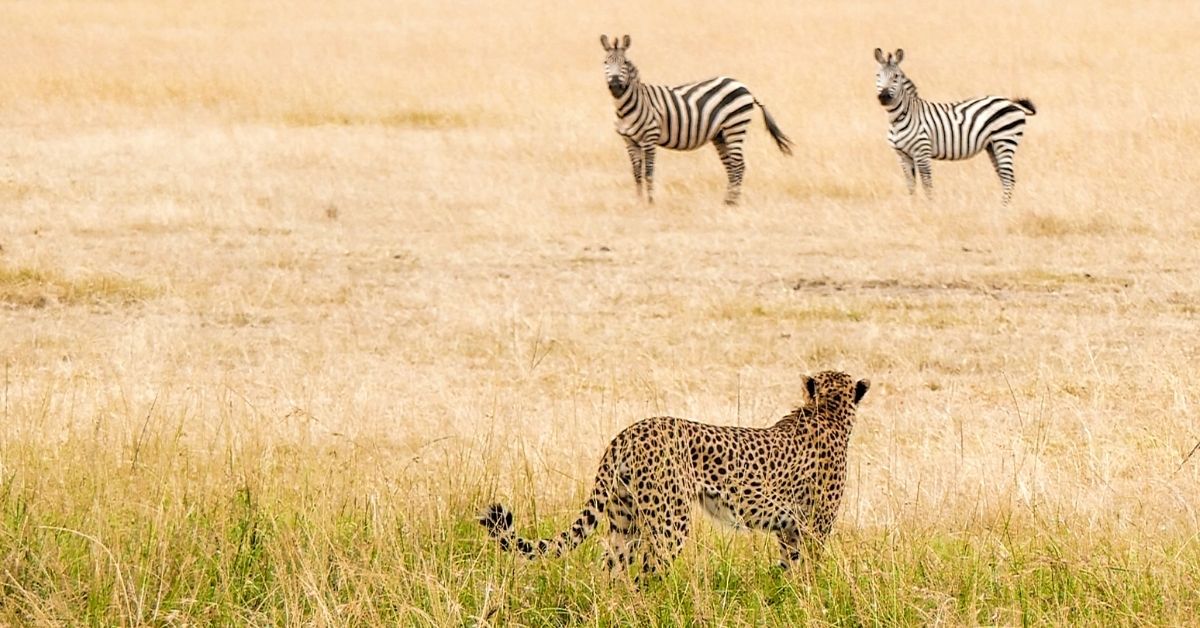 Cheetahs are well-established apex predators. They are deadly big cats that are said to have the strength and speed to take down animals much larger than themselves – animals such as the zebra.

However, despite their shared habitats, zebras are not usually listed as cheetahs’ prey. So the question comes to mind: Do cheetahs consume zebras?

Yes, cheetahs can eat zebras, but it is not as easy as one may think. The zebra can prove to be quite a challenge for the cheetah. And that says a lot considering that the cheetah is the fastest land mammal and one of the most intelligent predators out there.

However, the zebra is not an animal that goes down without a fight. While it is not precisely one of the most feared animals out there, the animal does pack quite a kick. (Literally.)

When do Cheetahs Eat Zebras?

While cheetahs do eat zebras, it does not happen very often. Cheetahs often prefer other, smaller-sized prey because they are more accessible and, quite frankly, easier to catch.

However, the cheetah did not get its reputation for being one of the most intelligent, most feared predators by backing down from a challenge.

Whenever cheetahs hunt down or eat zebras, they usually go for the baby zebras, who are unguarded, smaller, clumsier, and easier to catch.

There are also times when this fierce predator targets old, slower, weaker zebras. Sick or injured zebras are also among this big cat’s possible prey.

Zebra carcasses are also welcome treats for the cheetah if no other predators have already lain stake to its claim.

Now, what exactly makes the zebra such a challenging catch for the mighty cheetah?

This group of animals is quite aware of their nature as prey; thus, they have developed many defense mechanisms that have helped them evade being successfully hunted.

In combination with their natural defenses, these developed defense mechanisms have proven very effective against the mighty cheetah time and time again.

One thing that the zebra has against the cheetah is its massive size. An average zebra’s size usually comes up at around 120 to 140 cm or around 47 to 55 inches. This is a noticeable jump from the cheetah’s average size of 67 to 94 cm (around 26 to 37 inches).

Because the zebra is larger than the cheetah, it can prove to be a more challenging catch for the cheetah, who usually goes after smaller-sized prey.

While it may not seem like much, the size difference can give the zebra some sort of advantage against the speed and strength of the cheetah. And any advantage can prove to be life-saving for any prey being hunted by a predator as fierce as the cheetah.

The zebra may not be considered one of the world’s strongest animals, but they sure do pack quite a punch – or should I say kick?

The zebra is not the type of prey to go down without a good fight. While it may not immediately kill the cheetah in retaliation, its kick can be strong enough to knock it down long enough for the zebra to escape.

A zebra’s kick has a reputation of being so strong that it can break bones. If it comes to it, the zebra may be able to injure the cheetah so severely that it will never be able to run again, leaving the predator to die of starvation.

Technically speaking, the zebra stands no chance at outrunning the cheetah, who is well known as the fastest land mammal. However, spending your whole life as prey does not come without learning intelligent evasive tactics.

This is shown in how zebras jump in the water to fend off the cheetah. Like other cats, cheetahs can be hesitant around water despite being great swimmers and may call off the chase completely if the zebra jumps in a body of water.

Some studies also show that zebras only run at around half their maximum speed in order to be able to change dynamics, direction, and speed quickly. This can confuse the cheetah for a split second and give them this cheeky prey an opening to get away from the situation.

Another advantage that the zebra has against the cheetah is its group dynamics. Zebra herds can be very protective of each other, especially towards the younger and weaker members of their group.

If they spot a member of their herd being hunted down by a predator such as a cheetah, they can proceed to run around their pursued member in an attempt to ward off the predator.

Why do Cheetahs Avoid Zebras?

To put it simply, zebras take much effort to take down. When hunting zebras, cheetahs find themselves exerting a lot more effort than they usually do, mainly in part of this prey’s large size and numbers.

The zebra’s strong back kick can also severely injure the cheetah rendering it unable to walk, let alone hunt for food. So the cheetah could be risking its own life by going after this particular prey.

Usually, only the Tanzanian cheetahs who are larger than other cheetahs go after zebras as prey. However, even they tend to avoid them and still prefer smaller, more accessible prey if they can get to it.

Cheetahs eat zebras – just not as often as they do other prey. Because of the zebra’s natural build and defenses, they can prove to be a lot for even the fiercest cheetahs out there.

However, being the intelligent big cat and fierce predator it is, the cheetah does not back down from a challenge when necessary and can still overpower several zebras in its lifetime.