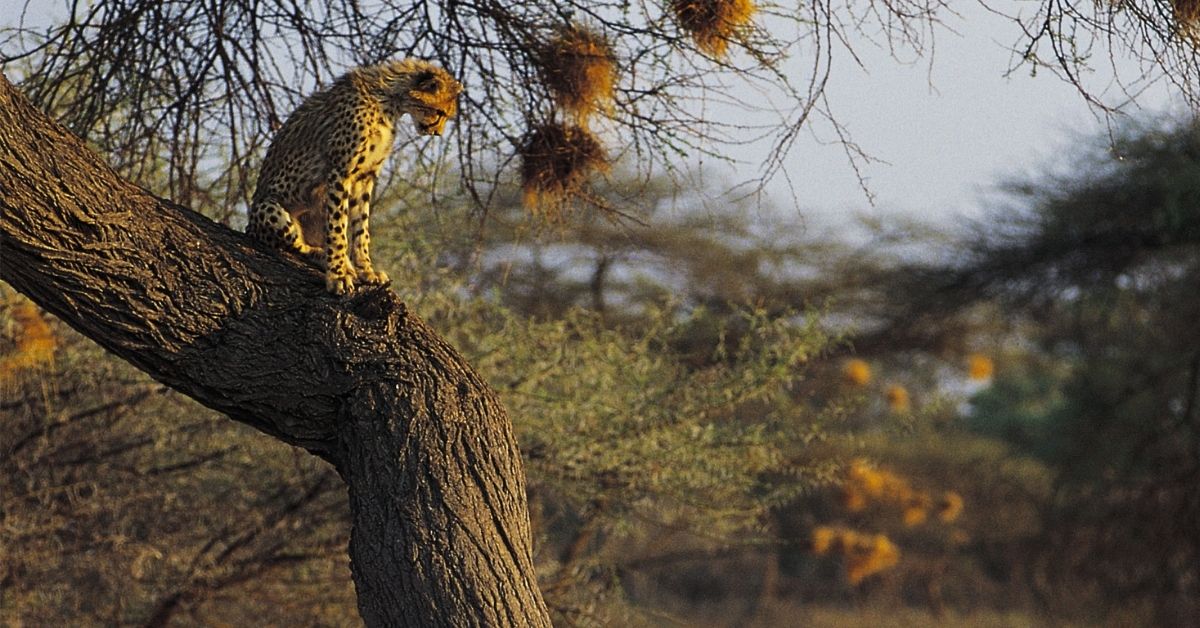 Cheetahs are very well known for their speed and relentless agility. This, paired with their light builds and flexible bodies, should make one think that this limber cat would be able to climb great heights — literally. However, can cheetahs climb trees?

To cut a long story short: Yes, cheetahs do have the ability to climb trees. However, many people often believe otherwise. This is mainly because cheetahs often do not climb trees and prefer sticking to the ground. In addition, they are not truly built for tree climbing.

True, the cheetahs have small, light builds and are considered very agile, proving ideal for a tree-climbing cat. However, this is not the case for this big cat.

The cheetah is limited in its tree-climbing abilities and can only be considered average at best. They can only manage short climbs with trees that provide angles and curves and cannot handle steep heights like their big cat cousins.

They also climb trees much slower when compared to other big cats such as leopards and jaguars. Moreover, while they can get up the tree, they often find themselves struggling to get back down on the ground.

What Limits the Cheetah’s Climbing Abilities?

There are many reasons why the cheetah is not known for or skilled at tree-climbing. Their limited abilities can be attributed to various physical and environmental factors.

For one, the cheetah has a distinct pair of claws that sets it apart from its tree-climbing cousins. They are said to have claws that resemble a dog’s claws more than those of a cat’s in the sense that they are blunter and are only semi to non-retractable.

These claws limit their ability to gain the traction required for tree-climbing. However, these claws are terrific for groundwork and are responsible for their speed whenever they run.

Two, the cheetah is built differently. Climbing trees requires a tremendous amount of strength in order to be able to pull one’s own weight up and combat gravity. This is, unfortunately, something that the cheetah seems to lack in as its muscles are built for incredible speed and not strength.

Lastly, there are not many trees where the cheetah lives. Cheetahs reside in dry grasslands, savannahs, and open plains that do not have many trees around. Thus, this big cat should not have much reason to seek out or climb trees as opposed to their big cat cousins that live in wooded areas such as the leopards.

While cheetahs may not be known for spending much of their time climbing trees, they do eventually get to it for various reasons. These reasons can include the following:

Cheetahs, much like other big cats, are very territorial beings and like to mark their spaces in order to stake their claim on the land and inform other cheetahs and animals that this land is spoken for.

They do this by urinating and leaving piles of feces on different structures, which include, you guessed it, the tree.

Trees are considered ideal locations to mark their territory for various reasons. For one, they are sturdy and not as quickly affected by the elements compared to grass and dirt.

Two, they also stand out and function as fantastic landmarks for the animal.

And three, the high ground that the tree provides allows the cheetah’s scent to interact better with the wind and spread it so that other animals can smell it even from far away.

Trees can also prove helpful to the cheetah when it wants to get a better scope of the land surrounding it. The cheetah can climb the tree and take advantage of the elevation it provides to gain insight into what may come its way.

The cheetah is not all about business. Like other cats, these big cats know how to have fun and utilize trees to form some sort of amusement.

Cheetah cubs are known to run up to trees and play on them. They have often been photographed climbing these structures and utilizing them as their very own literal jungle gym. Mother cheetahs have also been seen climbing and playing on branches of trees with their cubs.

Tree-climbing can prove to be an excellent way for cheetahs and their cubs to have some fun and get some great exercise.

These big cats have also been spotted to use the trees as a form of shelter. Cheetahs have been spotted climbing trees in a desperate attempt to avoid other predators in their pursuits, such as lions and hyenas.

We can also rarely spot cheetahs bringing the small game up to low branches in order to avoid other predators from snatching it away.

Cheetahs can also climb trees and take naps on the branches; however, they prefer napping on the tree’s base underneath the trees’ shade.

While it certainly is not one of their stronger points, the cheetahs are very capable of climbing up trees.

They might not be jumping from branch to branch like leopards and jaguars, but the cheetah’s relationship with trees is nothing to turn your nose up at. The tree has provided the cheetah with various functions and protections that allow this magnificent cat to live and survive in the wild.