Cougar vs Panther: What’s the Difference? 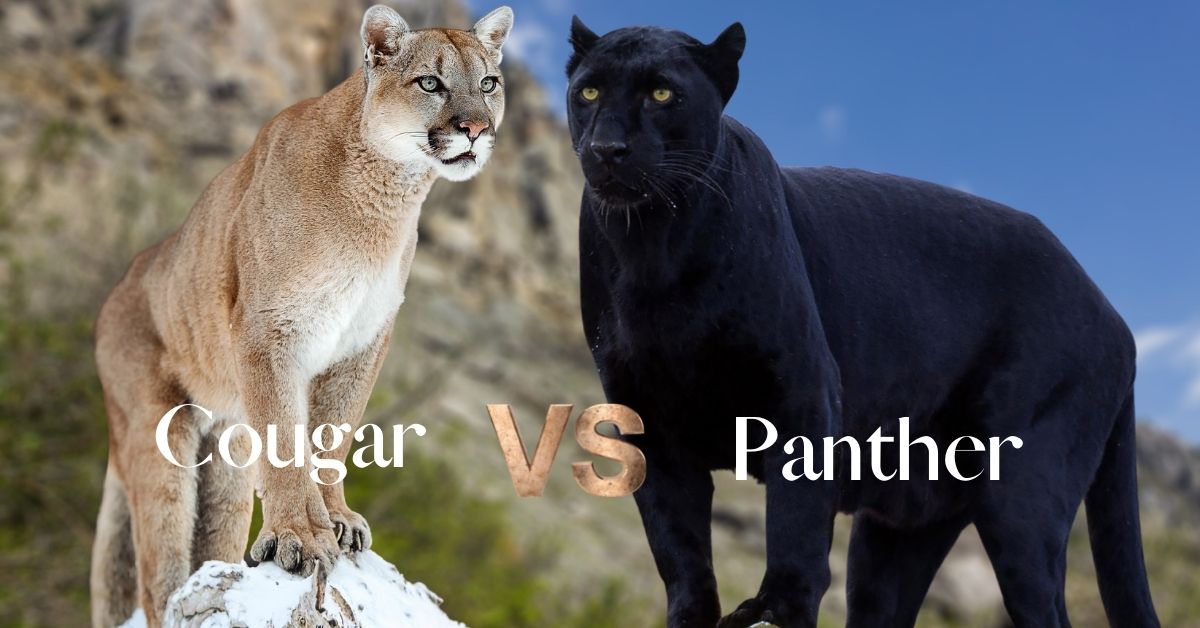 There has always been some debate and misunderstandings regarding cougars and panthers. Some say they are of the same species, while others say otherwise and argue that they are entirely different. Here, we tackle some of the confusion and unearth the truth on Cougars versus Panthers.

Confusion Between Cougar and Panther

Are the cougar and the panther the same species, or are they different? To add to the confusion, it is a little bit of both.

Usually, the term panther is used to refer to melanistic members of the genus Panthera, specifically: Panthera onca and Panthera pardus. These species are distinctly different in appearance, habitat, and location from each other and the cougar.

However, cougars have also adapted the panther name and have been referred to as such by many people in the United States. An example of this would be the Florida panther. So, in this case, the “panther” that people refer to is actually a cougar.

This inconsistent use of the term panther has been considered a source of mix-ups that continues up to date. So let us understand and dive deeper to learn the actual differences between the two.

The cougar (Puma concolor) is the second largest of the big cats of the New World. Despite this, it also bears one of the closest resemblances to ordinary household cats.

These big cats are typically tan, tawny, reddish, or silver-grey with a darker concentration of brown right towards the middle of their backs. Their underbellies and throats are usually pale or white. They are also found to have touches of black on the tips of their tails, sides of the snout, as well as the back of the ears.

In spite of fierce competition in their areas, these cats are still among the fiercest predators in the wild. They tend to be solitary and have been observed to be active after sunset making them crepuscular or even nocturnal in nature.

They are usually spotted in the western hemisphere, usually in the Americas. This cat has been seen in various locations from Canada to Patagonia. They are also said to have the ability to survive various habitats such as high mountains, jungles, forests, and deserts.

The wide range of the cougar has allowed it to be referred to by many names depending on its location. These names include mountain lion, catamount, puma, painter, and, of course, panther.

Panthers are members of the Panthera genus and are composed of Panthera onca (jaguars) and Panthera pardus (leopards).

While they are not considered a different species of Panthera altogether, the term panther has been adapted to group together melanistic versions of the leopard and the jaguar.

These big cats possess excesses of the pigment melanin, which is responsible for its dark coloration and almost solid black or dark brown color. While these leopards and jaguars still possess their rosettes, they are rendered almost invisible as they blend in so well with the dark coats of these big cats.

These panthers are apex predators or top-of-the-food chain-level predators and hunt mainly during the night. Like other big cats, they are also solitary and only interact with others of their own kind during mating season.

The leopard is found in Africa and some parts of Asia. They can be found in a wide variety of habitats ranging from deserts and forests to mountains scattered all over these areas.

On the other hand, the jaguar is found in the Americas – most commonly in Amazonian rainforests.

Because of their genus and their unique coloration, these panthers are what researchers consider genetically “true panthers” as opposed to other panthers who have simply adapted the name “panther.”

How to Tell Which One is Which?

As discussed in the sections above, these two groups of big cats share a couple of things in common, but the most confusing similarity would be the name people choose to call them.

These two key points may help you differentiate these majestic cats:

The cougar is a cat that possesses many names and can be called different ones depending in large amount on the location and habitat.

It can be helpful to know which big cat is more common in that area or which terminology may be used to refer to the cougar in said area to differentiate the two.

The cougar is usually a solid tan color with the occasional reddish or gray variation. However, the panther appears solid black or dark brown, setting them apart from other “panthers.”

All big cats fall under the family Felidae and share a lot of the same traits but rarely do you see them sharing the same names, such as in the case of the melanistic leopards, melanistic jaguars, and cougars.

While similar in name, it is essential to remember that these cats are made of different species and occupy various habitats found in different locations.

However, as you can see, despite all of this, they are not so different from each other and are all still among the biggest, baddest large cats that one can hope to find in the wild.