Cheetah vs Jaguar: What Are the Differences? 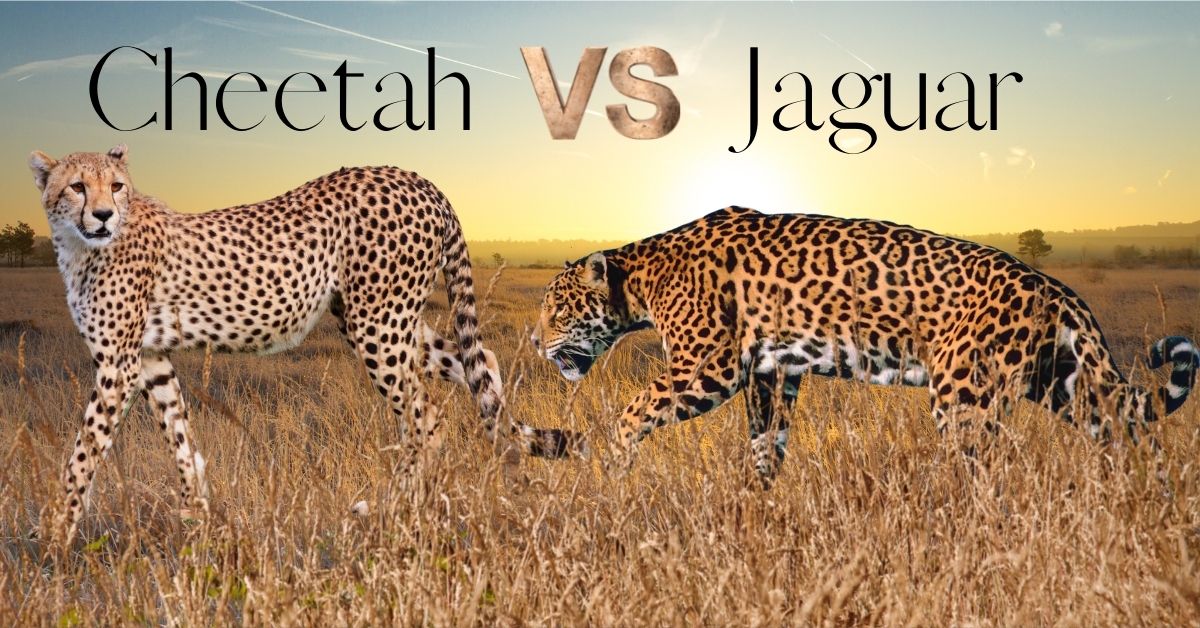 Big cats are apex predators in their respective habitats, and many people compare them with each other.

Cheetahs and jaguars may look similar to one another at first sight because they are both big and spotted, but this is where the resemblance ends.

Are Jaguars and Cheetahs the Same?

Cheetahs and jaguars are not the same and come from different ancestors, they also live in different parts of the world.

A cheetah and a jaguar are both big cats. They both prey mainly on herbivorous animals, and they both have black spots on their tan-colored bodies.

A cheetah (Acinonyx jubatus) and a jaguar (Panthera onca) are similar in size but live on two different continents, and their paths never cross in nature.

Who is Faster: Jaguar or Cheetah?

In their respective habitats, cheetahs and jaguars use their speed differently. While jaguars are fast and agile cats, they rarely chase after their prey, relying primarily on ambush.

Cheetahs, on the other hand, hunt by chasing after their prey. Therefore reaching higher speed is essential for their survival.

What are the Differences Between Cheetahs and Jaguars?

As mentioned before, cheetah and jaguar are two different animals, even though they both are considered big cats. They differ in many levels, from their habitat, through their physique to their behavior and hunting.

Cheetahs live in grasslands in Africa and the Middle East. They are not really fussy about their habitat, although they don’t venture into forests. The preferred terrain for cheetahs is open space with tall grasses and shrubs, where they can stalk and chase their prey and avoid larger predators, like lions, leopards, and hyenas.

Cheetahs have been found in mountainous areas of western Africa and the Sahara region and Iranian hills of approx. 7000 ft above sea level.

Jaguars inhabit a different side of the globe. Those big cats’ habitat extends from the very south of Northern America (Arizona) through Central America to South America (Argentina).

Jaguars live mostly in dense tropical or subtropical broadleaf forests, wetlands, and sometimes hilly areas at an elevation up to 12 000 ft.

Jaguars are the third-largest cats in the world. They have a well-developed musculature and stand between 26.8 – 29.5 inches tall. The heaviest male jaguar recorded was 348 lbs, but their average weight usually spans between 123 – 212 lbs.

Scientists noticed that jaguars’ body size changes depending on the region they inhabit, and it tends to decrease the further north they live. Their body size also depends on their habitat.

Jaguars found in the jungle are smaller than jaguars living in more open spaces. The reason could be the lack of larger prey in the jungle or the need to fit within a thick forest.

Even though jaguars are not the biggest out of the big cats, their body size to jaw strength ratio is the highest. With their large canine teeth and strong jaws, they can crush turtles’ shells.

A jaguars’ fur ranges from pale yellow through tan to reddish-yellow with whitish bellies. The spots on jaguars’ bodies connect, making shapes that resemble rosettes, except on their heads, necks, and bellies where they are singular.

Spots on a jaguars’ tails merge, creating bands at the end part of the tail and a black tip. There are also melanistic jaguars, known as black panthers. This color variation is less common but can occur in a litter of normal-colored cats.

In comparison, cheetahs are less muscular than jaguars but are considerably taller in shoulders, between 26 – 37 inches.

Cheetahs have comparatively small canine teeth, and their claws don’t retract. Cheetahs use their claws like track runners might use their spiked shoes to better grip the surface and gain speed.

Cheetahs are tawny or creamy white, and unlike jaguars, they are covered with solid black spots throughout their whole body. Marks on their tails form black rings towards the end of their tails that are tipped with white.

Cheetahs have distinctive facial marks that run from the inner corner of their eyes down towards the edges of their jaws, creating “tear” streaks. The facial stripes are the most recognizable characteristics of those big cats.

The cheetah’s greatest advantage is its speed. While hunting, the cheetah tries to sneak as close to its prey as possible and then begins the chase.

Cheetahs are not particularly strong, so their prey is often small to medium-sized, primarily calves and foals of wildebeests and antelopes. Cheetahs don’t have big teeth like most of their big cousins.

Therefore once they catch their prey, they rely mostly on their endurance to kill. The tired prey doesn’t usually put up a lot of fight, and once cheetahs clamp their teeth on the prey’s throat, they hold on until it loses consciousness. Cheetahs hunt during the day, sometimes even through the hottest hours.

The light build and lack of great strength make cheetahs vulnerable to their opponents, like lions, leopards, and hyenas. When surrounded, cheetahs prefer to run away rather than fight, even if they are eating. They would abandon their food without hesitation if confronted by a stronger opponent.

Cheetahs are known to travel and hunt solitary, excluding mothers with cubs that stay together for about two years, but there have been situations where a pack of 2 – 5 cheetah males would hunt and stick together. It greatly improves hunting success and chances of survival.

Jaguars rely on their stealth and hunt by ambushing their prey. They prefer to hunt during the night, but they won’t hesitate to feed during the day if they are hungry.

A jaguars’ diet is more diverse than cheetahs’. They are opportunistic hunters and often hunt whatever is more accessible at the time, from fish, turtles, and small caymans, to curassow birds, armadillos, and capybaras.

Unlike cheetahs, jaguars are the biggest predators in their habitats and don’t need to be wary of anything except another jaguar crossing their paths.

Jaguars are fiercely territorial cats and would fight for their territory with other jaguars and even smaller cats, like ocelots. They live and hunt solo, except for mothers with cubs and during breeding times.

Jaguars never live in packs, and the cubs usually stay with mothers for two years, similar to cheetahs.

Despite the differences between cheetah and jaguar, they are both beautiful animals, proud and agile, and should be admired and protected.