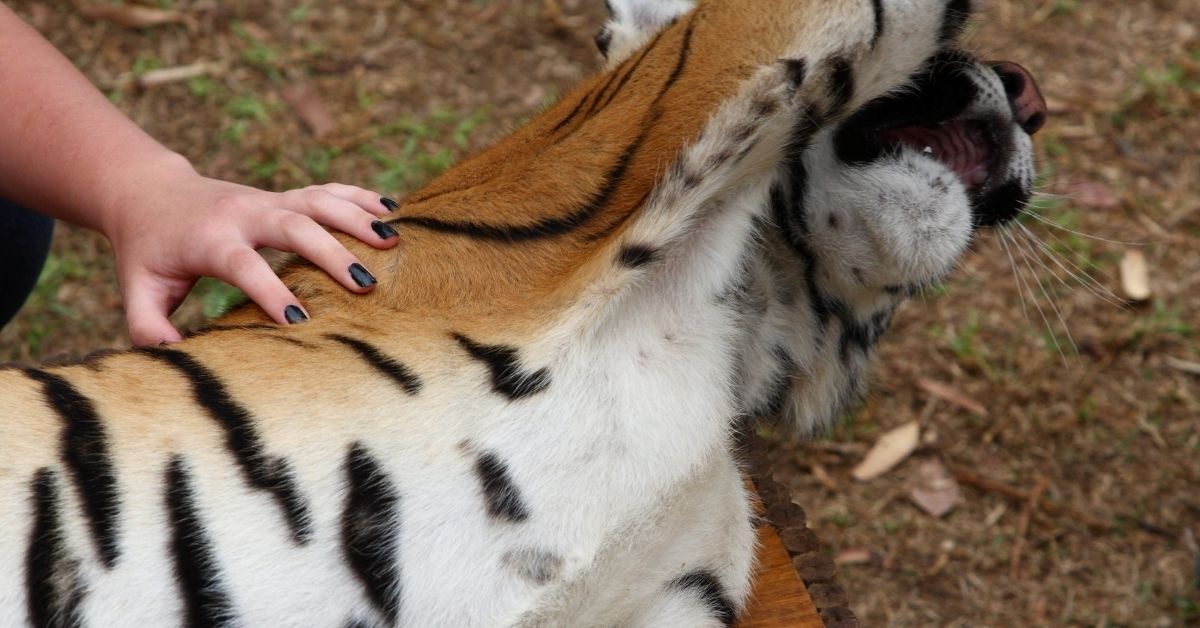 Tigers are incredibly intense animals. They are unpredictable and have been known to lash out depending on their mood. Prey and predators alike avoid this wild cat in fear.

However, there have been documented occasions of the tiger coexisting and seemingly forming relationships with other animals. Could it be that the terrifying king of the jungle is actually friendly?

Can One Be Friends With Tigers?

Tigers are not friendly. Not even in the slightest. To be frank, these animals are known for their rugged and solitary character.

In addition, tigers are known for their highly territorial nature. Anyone who finds themselves trespassing the tiger’s area, regardless of whether you’re predator or prey, is sure to find itself among the tiger’s latest victims.

However, the tiger wouldn’t have been able to survive as well as it has without any help. Despite its solitary nature, the tiger has been able to form relationships with its kind, other animals, and even humans. That is if they find it necessary or beneficial.

However, forming a bond with a tiger doesn’t mean that you’re out of the woods. Being friends with this fierce predator will always come with an inherent risk.

Tigers With Other Tigers

Tigers have a love-hate relationship with the rest of their kind, often opting to live, hunt, and survive alone. In this case, these big cats only interact with others of the same kind during mating season.

Solitary tigers, especially males, can get very aggressive when they spot the presence of another tiger stalking in its territory. This aggression can worsen if they find more than one overlap in their territories

This aggression can lead to an intense confrontation over who truly has claims on the land. These conflicts can last for a long time until the other tiger vacates the premises or dies.

However, they are not all about brute force and fierce love. These large cats can also be very affectionate towards each other such as the case between mother tigers and tiger cubs.

The mother tigers and her cubs can purr and rub against each other to show affection and love for one another. These big cats can also show love like ordinary house cats like licking, grooming, and moving their tails.

These bonds can be so intense that even when they become of age, tiger cubs tend to stick close to their mothers by claiming territories adjacent to hers.

A male and female tiger can also show signs of affection when interacting with each other during mating season. Two tigers may even interact and hunt together, but they will never share the same kill.

Tigers’ Relationship with Other Animals

As stated, the tiger can, albeit rarely, form alliances or bonds with animals outside their species if they find it necessary. However, these are extremely rare and dangerous “friendships.”

Due to their respective widespread distributions worldwide, the leopard and the tiger can find themselves coexisting in the same areas.

In normal circumstances, these two predators would be at each other’s throats if they happen to chance upon each other, especially if it occurs in the middle of a hunt. Tigers don’t appreciate the presence of another tiger in their territories, much less another species of predator.

However, throughout years of adaptation and learning how to live with each other, these two animals have developed a sort of system to coexist and survive alongside each other.

For starters, leopards go to great lengths to stay away from the larger and stronger tiger. They can back away or hide whenever they see the tiger or stop their hunt altogether.

Given that their main reason for conflicts is competition over scarce prey, the leopards tend to stay away from the tigers’ target of choice. Instead, they tend to go for smaller game.

This relationship may not be the most beneficial for both parties. But it shows how the tiger can peacefully coexist with another predator.

This peace is fragile, though, as the tiger can still very well choose to kill and eat the leopard or any other predator due to competition.

Dholes are wild Asiatic dogs that usually reside in the same territories as other wild predators such as leopards, lions, and tigers.

They are admittedly much smaller in size and strength than the majestic tiger and are not really considered allies by the big cat. Like other predators, they can fight over the same kills and may even steal kills from one another.

However, despite the unstable nature of their “friendship,” they are able to coexist in the same space. They don’t always get along, but these species have eventually learned to, somewhat, share their space and resources.

The relationship between humans and tigers goes way back to Ancient times. These majestic beasts have been depicted as loyal, albeit dangerous, companions. However, human relationships with tigers have always been fragile and came with a significant risk of losing an arm or a foot.

These large cats have been the cause of the most significant number of attacks on humans compared to any other big cats. Their reigns of terror can last for years and cause up to 1000 human deaths each year if left unattended.

Most of the time, these attacks happened because humans invaded or wandered into the tiger’s territories. Again, these dominant cats are incredibly territorial and will not hesitate to attack any threat to their land.

This alpha cat also has the strength and confidence that can drive them to attack humans during daylight hours without any hesitation.

There may also come times when their usual prey is scarce due to seasonal relocation or extreme famine. In this case, the tiger may turn and hunt humans to feed its enormous appetite.

Other tigers may even develop a taste for humans and turn into man-eaters. These tigers will then regularly hunt humans to satiate their hunger.

Despite their rocky relationship, tigers have been documented to show some sort of loyalty and affection towards their owners, trainers, and handlers.

They have been seen cuddling up to, kissing, and even playing with their human companions. Some homes even house their own pet tiger having it behave like an oversized house cat.

Many tigers have been introduced to human settlements. Eventually, these cats were bred and raised in captivity to function as pets, zoo displays, and other companions for royalty and affluent society.

They have become such regular fixtures in human society that you can find their influences in art, culture, and history. Some humans in Northeast India have even gone as far as proclaiming tigers as their brothers.

Inherent Dangers of Tigers As Companions

However, despite this show of apparent loyalty, we must remember that tigers can never be entirely loyal to humans. These big cats are only thinking about their own survival.

The mere act of coexisting or even going as far as owning a tiger as a pet can bring unnecessary danger to humans and those surrounding the animal.

Even those seemingly tamed and residing with humans as companions can be driven by aggression and literally attack the actual hands that feed them.

Tigers are also naturally aggressive towards humans. Most of them have been brought here and forcibly taken away from their natural habitats to unwillingly function as pets, circus acts, or displays in local parks and zoos.

Nevertheless, many human conservationist groups have taken a significant interest in this wild predator and started multiple programs, laws, and regulations to protect and preserve their populations in the wild.

Many government and independent initiatives have been taken to safely repopulate these strong beasts and protect their habitats to ensure their survival for years to come.

So, are tigers friendly? The answer would have to be an unequivocal NO. These large predators are simply too intense and unpredictable to be considered a true friend, as seen by how they can betray and attack masters and companions.

However, they can form a fragile peace with other animals and create bonds to survive.