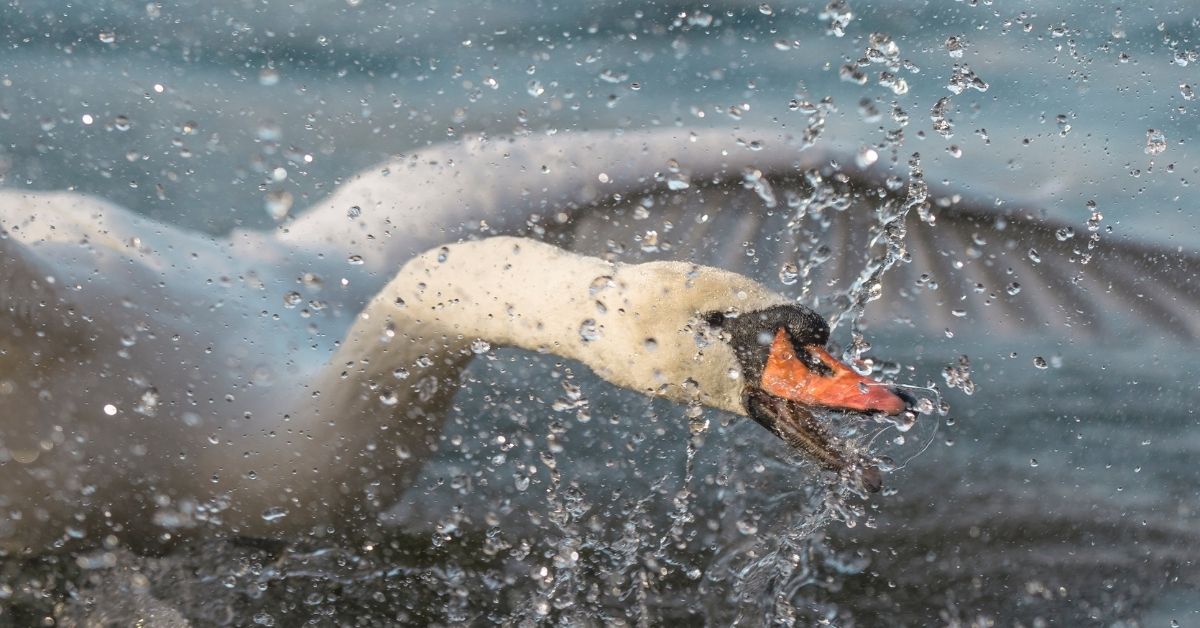 Swans are beautiful and very graceful animals. They are big birds and are equipped with strong long necks and serrated edges of their beaks that resemble a set of small teeth.

Many people feed swans in the cities as a pass time and admire them from a distance, but not many people think about whether they are dangerous animals.

Are Swans Dangerous to Humans?

The short answer to this question is no, swans are not dangerous to humans if people keep their distance. However, that does not mean that they can’t hurt you if you get too close.

Swans are wild animals and should be treated as such. They are known to attack people who come too close to their nests or young ones.

So, while swans may not be dangerous animals, it is still best to admire them from a distance.

Swans generally only become aggressive during nesting season (which is springtime) when they are protecting their babies (cygnets). At other times of the year, swans are usually quite docile creatures.

So, if you see a swan outside of nesting season and it looks like it’s getting ready to attack, it’s probably just trying to protect its territory.

There are reports of swans attacking kayakers and people in canoes going down a river or cruising a lake. There was also one fatal incident when a mute swan capsized a kayak and prevented a person from reaching the shore, resulting in drowning.

Are Swans Dangerous to Animals?

Yes, swans can be dangerous to other waterfowl and even small mammals.

There are reports of New York zoo-kept swans that went on a killing spree. The three pairs of nesting swans killed at least 50 ducks and geese in that same zoo. Another report says about Maryland swans killing mallard ducks, Canada geese goslings, and other swans’ cygnets.

There are also a few reports of swans killing small mammals that tried to steal their eggs or threatened their young.

Swans were also reported to kill an animal as big as a fox, and a few small dog owners lost their pets to swan attacks.

It is advisable to keep your dogs on a leash in the presence of a swan, especially in the breeding season.

Can a Swan Break Your Arm?

Swans are large, powerful birds and while they are not typically aggressive animals, they will defend themselves and their territory if they feel threatened.

Their long necks and sharp beaks are capable of inflicting deep wounds, and if you approach a swan too closely, it is possible that you could be injured by its wings.

However, while the urban myth, told to us by our parents when we were young, about swans breaking human bones with their wings is still circling out there, their strong wide wings are not strong enough to actually break human bones.

The injuries inflicted by a swan’s flapping wings can only be as serious as big bruises on your arms.

Bones in swan’s wings are hollowed, and much thinner than human bones, so there is a bigger chance of a swan breaking its wing while trying to break your arm.

Can a Swan Bite Your Fingers Off?

No, swans cannot bite your fingers off. Even a small child’s fingers are safe around a swan. Swans don’t have teeth, just serrated beaks. Their bite force is not so hard, because they only need it to eat soft water plants. So if you’re ever worried about a swan biting your fingers off, don’t be!

Still, it’s best to be careful around any wild animal. Swans may look graceful and calm, but they can still deliver a nasty bite if they feel threatened.

If you do get bitten by a swan, make sure to clean the wound thoroughly. And if the skin is broken and the swan draws blood, it is good to take proper care of the wound in case of infection.

So remember, swans cannot bite your fingers off – but they can still give you a nasty bite, so admire them from a distance, and enjoy their beauty from afar.

What To Do in Case Of Swan Attack?

Swans are large, beautiful birds that many people enjoy watching. However, swans can be aggressive, and they have been known to attack people if approached too closely.

If you find yourself in the path of a swan, there are some things you can do to protect yourself.

The first thing is to try and not approach a swan that is nesting or with cygnets. Although most of them prefer to back away from the danger, if there is no other option, they will charge you.

Another thing to do is try to stay calm. Swans are more likely to attack if they feel threatened, so it’s important not to make any sudden movements. If you can, slowly back away from the swan.

If the swan does attack, try to run away if you can. If the escape is not possible, protect your face and head from the flapping wings and bites. At the same time, try and back away from the attacking swan – they are much slower than you on the ground.

If the swan is prevalent and blocking your escape, you need to fight back. Although it is a rather scary thing to fight any wild animal, at the end of the day, humans are much stronger than swans and have much tougher bones than birds.

The last resort solution in this situation would be to grab the swan by the neck behind the head. If they can’t swing at you with their beak or turn around, their wings should not do too much harm to you, and once pinned in place they should give up the fight.

However, The best solution to prevent a swan attack would be to not approach its territory and be wary of any previous warning hissing and mock charges.

Swans are beautiful creatures that should be admired from a distance. Although they may appear calm and docile, swans can become aggressive if they feel threatened, and their long necks and sharp beaks can inflict serious injuries.

If you find yourself in the path of an attacking swan, try to stay calm and back away slowly if possible. If the swan continues to attack, you may need to fight back or grab the swan by the neck.

Remember, it is always best to avoid swan territory altogether to prevent an attack.