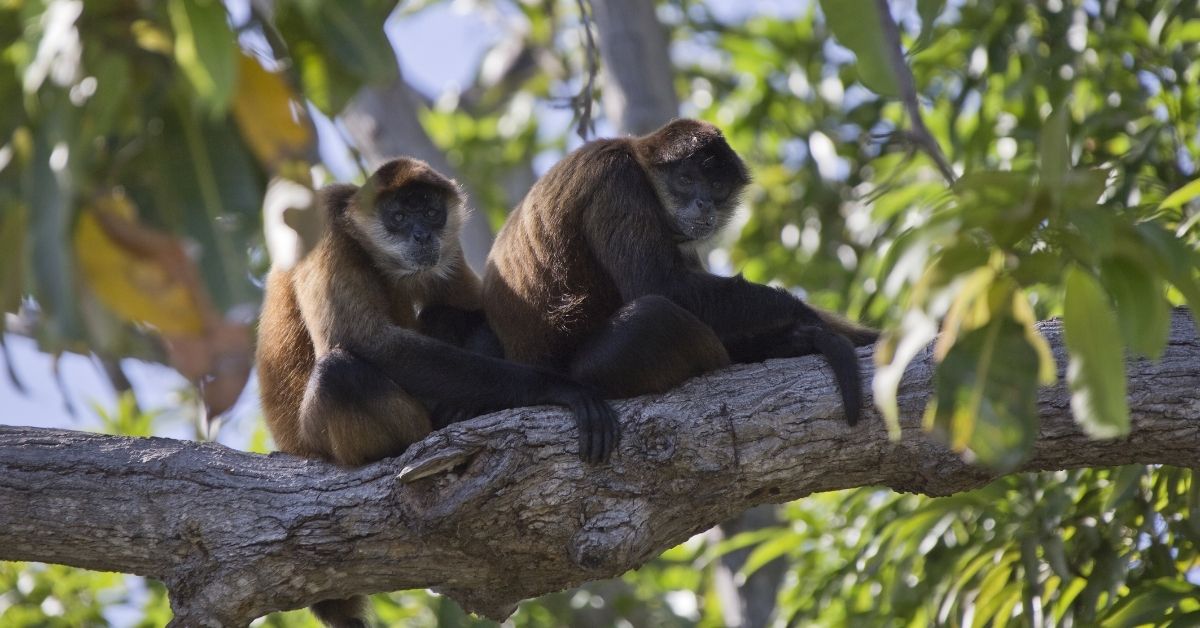 The interest in spider monkeys is growing by the day. While this may be good for conservation efforts being raised to preserve this vulnerable species, it is also raising interest in the possible domestication of these adorable primates.

Considering their unpredictable nature as a wild animal, would it really be safe to have a spider monkey around?

Spider monkeys certainly are adorable to look at but don’t let looks fool you. These animals can be very dangerous depending on the situation and are armed with various mechanisms to defend themselves should they see fit.

These monkeys, under ideal circumstances, pose no threat to humans. Much like most animals, they will leave humans alone and do everything to avoid contact unless they feel threatened or are suddenly approached.

If ever they do feel provoked or threatened in any way, they can resort to biting, choking, and even dropping branches on those they perceive as threats.

Are Spider Monkeys Aggressive Towards Each Other?

Spider monkeys do fight each other for various reasons. However, this is mostly done in self-defense or in the interest of the dominating subgroup within the troop of spider monkeys.

Spider monkeys travel in groups called troops consisting of 25 to 40 members and usually reside in areas rich in fruit trees. Most members of a troop form close bonds with one another. This is especially true among male spider monkeys.

For the most part, these troops may be seen living in peace due to the sociable nature of the spider monkey. They are often playing with each other and grooming one another.

From time to time, these primates may encounter other spider monkeys from other troops seeking to overtake their home territories and steal their resources.

In this case, the male spider monkeys of the troop may fight those from the other troop to protect their land and resources. These fights can get pretty animated and can last until the opposing group retreats.

One reason for this is said to be because the males require more food and therefore dominate the females in order to assure that they get the bigger share of food.

Male spider monkeys may also kill any unrelated children of the female that they are currently mating with. This act of aggression is common among animals to ensure that their genes are the ones that dominate the next generation.

Are Spider Monkeys Aggressive Towards Other Animals?

Spider monkeys prefer to retreat as opposed to confrontation when it comes to dealing with other animals that may pose a threat to their safety.

Due to their small size, spider monkeys face a lot of threats in the wild. These may provoke them to react aggressively to defend themselves. However, this is mostly for show as these primates lack the superior strength it would take to successfully ward off any significant threat with force.

These monkeys are usually kept safe by their arboreal lifestyles that separate them from most other animals residing in the same area. However, certain predators may possess the climbing and hunting skills to approach them.

If the spider monkey were to find themselves in this situation, they would react by shaking the branches howling, growling, and shaking branches with their hands and feet to try and scare the predator away.

Should this approach fail, they may resort to breaking tree branches to have them drop onto the predator in an attempt to incapacitate them or at least slow them down.

Of course, if all of this doesn’t work, they then scatter and run away as a last resort to same themselves and the troop.

Are Spider Monkeys a Threat to Humans?

Spider monkeys hold no threat to humans so long as humans do not invade their territories or threaten their existence. In truth, humans are the ones who are threats to spider monkeys instead of the other way around.

Spider monkeys will usually avoid contact with humans as they are viewed as one of the greatest threats to their habitats and safety due to the latter’s invasion of their land as a result of urbanization and growing human settlements.

If approached by a human, they may react in a hostile manner by growling. If he or she continues in his or her approach towards the monkey, they may attack and cause injury to the human by biting, choking, and the like.

Even if a spider monkey is raised in captivity, they can react violently towards its caretakers due to the mental strain that it experiences in captivity.

Initially, spider monkey babies may act affectionate towards their caretakers but upon reaching adulthood, they begin to exhibit hostility even towards those who raised them from childhood.

Can Spider Monkeys Be Kept as Pets?

There is now a growing interest in domesticating these wild animals, but keeping a spider monkey as a pet is not the best idea due to their unpredictable nature.

They may behave amiably and even affectionate at one point then totally shift to choking or even biting their caretaker to the next. They may also lash out when exposed to new people creating a dangerous environment for those surrounding the potential owner.

First and foremost, the spider monkey is a wild animal. You should not mistake their small size and cute features as welcome signs, approaching this animal, much like approaching any other wild animal, comes with its own dangers.

Their position in the animal kingdom hierarchy opens them up to many threats. While they usually mean others no harm, they will not hesitate to use all their abilities to ensure their own safety and survival.