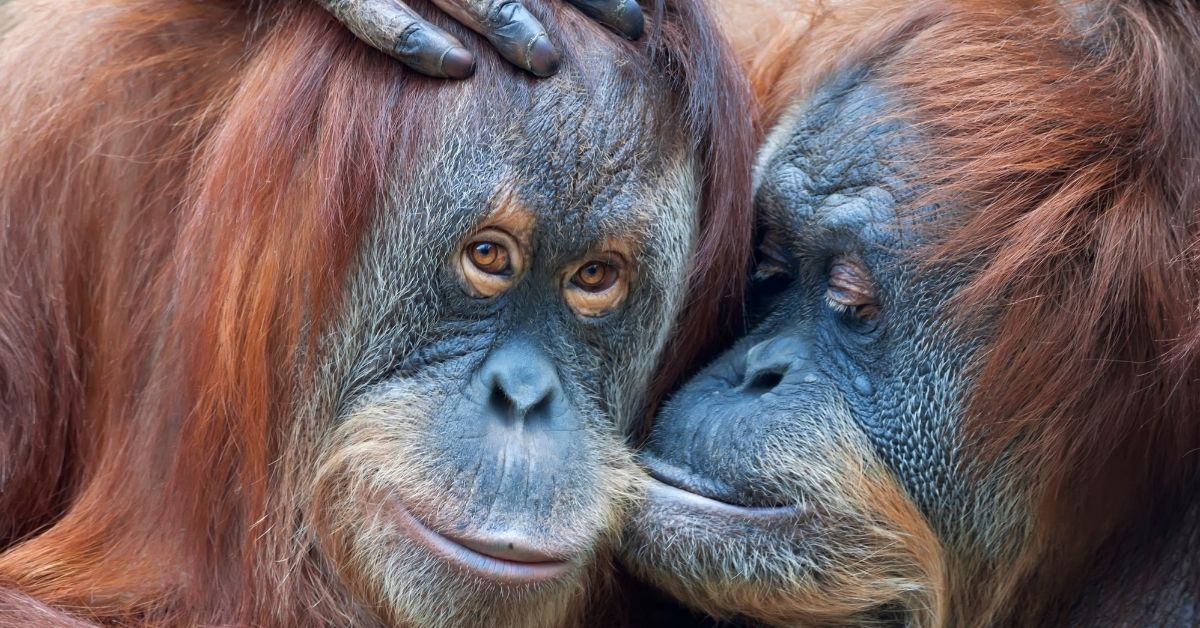 Orangutans are among the largest members of the primate family. However, despite their imposing stature, these giants are among some of the gentlest animals in the animal kingdom.

Given that they do not pose much harm against those that surround them, could it be that these orangutans also possess a friendly nature?

While these large primates certainly are non-aggressive, they aren’t the most friendly or social beings out there. In truth, these animals are the least social of all the great apes.

You would think that their gentle nature would make them social butterflies, but really orangutans are more like aloof loners in the wild. They are semi-social creatures often leaning towards extreme independence who prefer their own company or the occasional company of their family unit.

Their level of social interaction depends on the abundance of food in their area. Should there be an abundance of fruit trees, orangutans may gather and socialize with each other. However, if food is scarce, they will prefer to travel alone.

Their sociability also depends on mating seasons, age, location, and other factors.

Are Orangutans Friendly with Others of Its Own Kind?

Despite their tendencies to avoid contact with others, orangutans can be friendly with other orangutans.

Oftentimes, orangutan properties can overlap with each other but their tendency towards solitude can make interactions few and rare. However, whenever they do encounter each other, it is rarely hostile.

These calm giants get most of their social interactions with those in their family units as mother orangutans raise her children all together.

Once they are grown, females will then leave their mother to establish their own territory nearby while males will move farther away.

Even as adolescents, orangutans tend to live apart from each other. As soon as they are able to forage on their own, they move away from their mother and live solitary lives.

Adult orangutans rarely interact with each other however their land can often overlap with other orangutans allowing for some opportunity of socialization.

Females tend to stay close to their mother. Their territories may also overlap with the territories of other females who share the same main adult male as a mate.

This allows the female the rare opportunity to interact with other females. As a result, they are kept aware of their surroundings.

Males, on the other hand, are even more antisocial. They tend to stick to themselves as soon as they are able to fight and forage for themselves.

Oftentimes, adult males avoid contact with other males unless they want to challenge another to assume dominance over the area. These confrontations can get very rough and leave both parties with great injuries and scars to mark the occasion.

In contrast to their almost completely solitary lifestyle in the wild, orangutans in captivity often form close bonds with one another.

It is believed that orangutans used to live in groups — an attitude that is most displayed by those living in enclosures such as zoos and conservation areas.

These orangutans are often seen doing various activities together such as playing, and grooming. These acts of affection and types of social activities are rarely seen with orangutans raised in the wild.

Are Orangutans Friendly With Other Animals?

These primates usually reside on high treetops that separate them from other animals that roam the ground below making it almost impossible for them to possibly form social connections with other animals that live in the same area.

When approached, these large but gentle beasts tend to avoid interaction or signal hostility towards the other animal.

Don’t underestimate their relaxed nature, though. When threatened, an orangutan can easily defend itself from even the most dangerous threats such as the leopards, tigers, and even humans.

In a rare display, orangutans held in captivity made friends with some river otters that swam up to their enclosure.

A Belgium zoo began an experiment to allow these otters to reside in the river that runs through the large primate’s enclosure. Eventually, these otters began to get out of the water to join and play with the orangutans in the enclosure.

This interaction breaks the orangutan’s usual aloof reputation and portrays the kinder, gentler, and often rarely-seen social aspect of the primate’s personality.

Are Orangutans Friendly With Humans?

These laid-back creatures do not really interact with humans in the wild. If they do spot a human, they will either not care or go to the defensive and avoid all contact as humans are viewed as one of the most threatening predators in the wild.

However, these creatures are not considered to be a great threat to humans when encountered in the wild. Again, they are among the most gentle members of the great apes and will avoid all contact with others as best as they can.

Most orangutans held in captivity form close bonds with humans often seeking social interaction whenever they are near. This could possibly be because these interactions come with the incentive of a treat or food.

Oftentimes, orangutans raised in captivity and re-released in the wild can still maintain their closeness to humans and will approach them when spotted as a possible result of a learned routine when in captivity.

Can an Orangutan Hurt You?

In line with their gentle, passive nature, orangutans are among the least likely animals to come up and intentionally cause harm to humans. They usually don’t care for your presence or spend their time ignoring you. Others may grab at you, but that’s another story.

Some orangutans, usually those raised in captivity, may rush towards humans and grab them but this is not to be always assumed as an act of aggression as orangutans raised in captivity are used to seeing humans and associating them with feeding time or treats so they may get a little overexcited when spotting one when reintroduced in the wild.

If you ever find yourself in this situation, relax and carefully, gently try to separate yourself from the animal. They mean no harm and are probably just expecting you to have treats or food for them. Make sure your guide is close and call for help when needed.

It should be noted that orangutans raised in captivity have greater tendencies towards aggression as compared to those raised in the wild.

Male orangutans can be very aggressive and may even gang up to fight another orangutan. However, this is rarely the case as most male orangutans keep to themselves for the majority of their life.

Orangutans are sort of like the introverts of the primates. They are gentle, non-aggressive, and prefer to spend time alone in their own little corner of the jungle — completely satisfied with their own company.

However, no one can truly exist on their own and these gentle animals may still gather to ensure their species’ as well as their own survival.