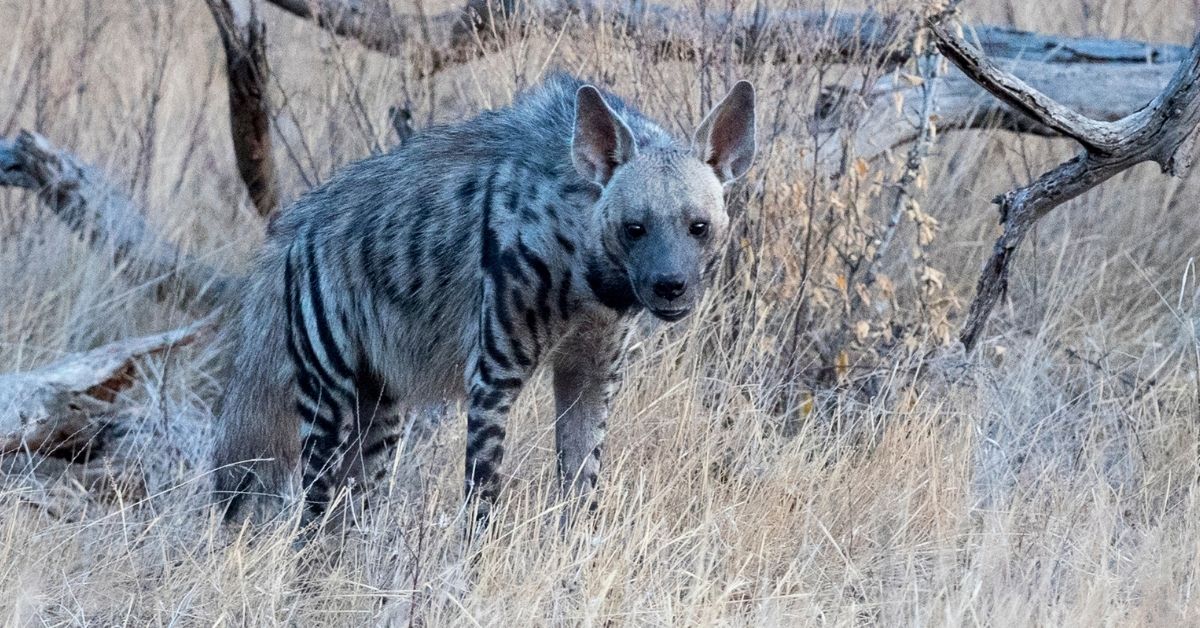 When people see hyenas, they often think of them as overgrown dogs. There is nothing more misleading than a hyena’s look.

Even though their looks might suggest one thing (like belonging to one family with canines), the truth behind hyenas’ scientific classification may be a surprise to many people.

No, hyenas are not canines. Hyenas and dogs both evolved from the same order, but that’s where the family splits. Hyenas belong to their own family, the Hyaenidae.

It is a very unique family sharing resemblance to both felines and canines but being neither at the same time.

Each hyena belongs to its own genus, and although from the outside they all resemble dogs to some extent, they don’t have common ancestors with any canids.

To link it to the Canidae family, we have to retrace all the way back to the order Carnivora, some 50 – 60 million years ago. That’s where dogs and hyenas part ways.

Around 15 million years ago, dog-like hyenas were roaming the earth. Although they all resembled modern-day wolves and jackals to some extent, the fossils reveal that even back then, they were built more like felids than canids.

Scientists identified about 30 species and classified them into a dog-like hyena and a bone-crushing hyena.

Hyena’s ancestors came from jungles in Eurasia, faring well for millennia. However, they started to slowly die off due to climate change and the arrival of canids from North America through Beringia.

Being evolutionary close to hyenas in build and diet, canids competed for food with hyenas in the same habitat. Now hyena ancestors have been extinct for around 1.5 million years. Out of extant hyenas, the aardwolf is the only one that resembles the dog-like hyenas from the past.

Are Hyenas Closer To Felines Or Canines?

Hyenas are closer related to felines than canines.

Hyenas belong to the suborder Feliformia. It consists of all cat-like carnivores. It is the same suborder that contains felines, i.e., tigers, lions, leopards, etc.

When deciding about the scientific classification of animals, scientists often compare common traits of many different species already belonging in specific order, suborder, or infraorder.

Hyenas’ build and some behavioral characteristics are consistent with other feliforms. It is the same suborder that consists of cats, mongooses, and civets. However, out of all the feliforms, hyenas resemble canids the most, giving many people a headache.

They can be identified as hyaenids because of the close resemblance of their skull structure (the middle ear’s design and the teeth arrangement). It is a very subtle difference, only one bone (or lack thereof), but the trait is common to all feliforms, suggesting their common ancestor many million years ago.

Still, due to the environment and climate change, hyenas started to evolve to accommodate the changes.

Why Are Hyenas Not Canines?

Hyenas are not classified as canines because of their build and behavior. Even though hyenas resemble a dog from the outside, their inner build suggests something different.

As stated before, to belong to one order, suborder, or even family in the scientific classification, animals need to share many common characteristics, alongside common ancestors and similar DNA.

Hyenas are not classified as canids as it was believed a few centuries before. Scientists tracked hyena ancestors, comparing DNA samples and fossils. The results gave them the answer that hyenas came from the same animals as civets, which are cat-like animals, closely resembling a mix between a cat and a weasel.

Many people believe that hyenas are related to dogs due to their appearance and style of hunting. As we are told, we should not judge a book by its cover, and hyenas are a perfect example.

Can A Hyena Breed With A Dog?

No, a hyena can’t breed with a dog. They are two different species and are not genetically compatible.

What is curious, many early scientists in the 16th to 18th century believed that hyena and dog hybrid existed. Some of them claimed that an African wild dog is one of the examples of such union.

In the beginning, the wild dog was classified as a hyena, then a dog, but in between, taxonomists believed it to be a hybrid due to its coat coloration, which suggested a mixed ancestry.

None of the scientists or taxonomists ever proved nor provided an appropriate citation for their claims. Their theories were mostly based on the outer appearance of animals. Modern-day scientists, however, found the answer to this.

Even though they share some physical and behavioral similarities, hyenas and dogs are, in fact, completely different species. They belong to the same order, but that is genetically too far apart to produce any progeny.

The closest and most obvious comparison of how far those two species are would be to try and breed a cat and a dog together.

The sperm cells of one species, in that case, are not cross-compatible with egg cells of the other species.

As a matter of fact, hyenas are more closely related to cats than dogs. Although for those curious people who may wonder, the answer would be: No, you can’t breed hyena with any of the big cats. They belong to the same suborder but are still genetically too far apart to breed.

Although hyenas are more related to cats than dogs, their looks are a result of convergent evolution.

It indicates that hyenas look like dogs because they underwent a similar independent evolution. In biological jargon, convergent evolution means that hyenas and dogs, even though only distantly related through Carnivora order, evolved similarly to adapt to similar necessities.

Hyenas and dogs don’t share ancestors. Both evolved in different continents, but the climate and number of competitors were similar. Hyenas and wild dogs went through the same adaptation process and filled a similar ecological nook.

Hyenas, like dogs, catch their prey with their teeth. They hunt in a pack, chasing after the animal rather than sneak up and jump from up close. They always eat fast, crushing bones, and sometimes leave their meal for later. Hyenas cannot climb trees.

Their feet are calloused and have large, nonretractable claws. Some of the hyena species also howl, but none of them barks. Their skulls are slightly longer, resembling a dog, but they also resemble a civet, which they share an ancestor.

Hyenas look and behave a little like dogs. Many people and even many documentaries put those two together in one basket. The truth is surprisingly different, though.

Hyenas are not canines, and they are not even closely related. Besides being carnivorous mammals, hyenas and dogs don’t have common ancestors. The only reason why hyenas look like dogs is evolution. The environment, climate, prey, and competition all had a say in how hyenas look today.

Hyenas are feliforms. It means that they are closer to cats than they are to dogs, although they cannot produce hybrids with either of them.