Are Elephants Friendly To Humans? 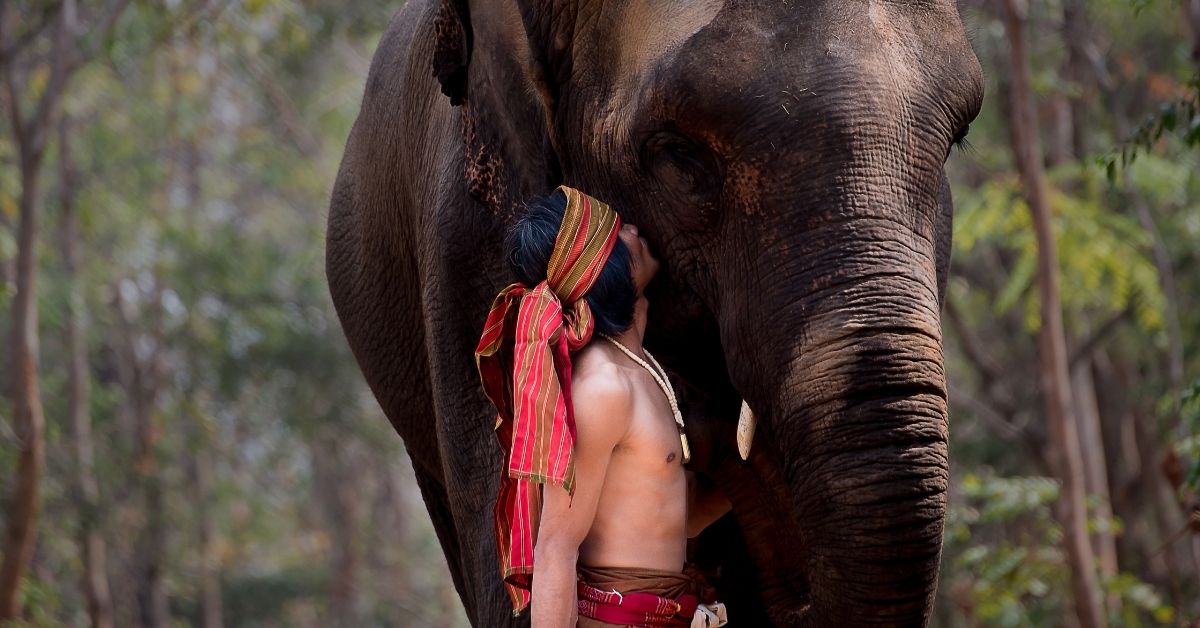 Elephants are majestic creatures roaming peacefully African and Asian savannas and forests. Due to their size and strength, they don’t seem to have too many predators and competitors wanting to fight them.

However, while thinking of elephants, many people see gentle giants harmlessly interacting with humans and other animals. Is it true, though?

Most captive-bred elephants are friendly towards humans as they have been brought up this way and trained to be friendly. Wild elephants are a different case, they are not unfriendly but are warier of human encounters.

Elephants are highly intelligent animals and can easily recognize many different situations, process them, and make conclusions whether there is a danger or not or whether someone is coming with peace.

Scientists believe that elephants, like humans, are self-conscious and have more ability to control their emotions than other animals.

Elephants are also rather gentle with other animals. Their docile behavior often prompts them to avoid harming other animals (and humans) at any cost as long as they don’t feel threatened by them. Elephants were observed performing uncomfortable tasks like walking backward to avoid crushing other animals and people.

Wild elephants can be relatively friendly. That is not to say they will come up to humans to play, but their curiosity can lead them to come closer to investigate without causing any harm, although they would probably not appreciate it if you tried to approach or touch them first.

When encountering wild elephants in their natural habitat, we have to remember that they are still wild animals.

Although not purposely looking to harm humans, they may feel threatened by our presence, especially if there are mothers with babies or male elephants in musth (a periodic condition of heightened testosterone levels accompanied by highly aggressive behavior).

In these situations, elephants don’t feel particularly friendly. In fact, they can be sometimes hostile and rather dangerous, but at the same time, in most cases, they won’t attack without warning.

Wild elephants often mock charge first. It is a warning for any intruders to stay away, or better yet, walk away and leave elephants alone. If disregarded, a warning may turn into a full charge until the threat is disposed of or chased away.

They also have a good memory, so if they ever witnessed people harming or harassing them or one of their elephant friends and family, they may not be so friendly when encountering more humans.

Another thing worth remembering is that although wild elephants mostly try and ignore people and live a quiet and peaceful life, they sometimes clash together. Even the most friendly of wild elephants, when startled, may react by swinging its massive trunk and injuring a person without really meaning to do so.

On that account, it is wise to remember that even if a wild elephant is curious enough to come and sniff at you, it is good to be still and wait, or even better, slowly retreat and admire the elephant from a distance.

Captive elephants have a more pleasant disposition. They are accustomed to human presence and associate humans with kindness and, more importantly, food. After all, they are still animals, and their priority is to get food the easiest way possible.

Most rescued elephants may be shy and uncertain of people’s intentions from the start, but as intelligent creatures, they quickly learn to treat people with respect and kindness because they perceive them as an element of their survival.

Elephants that grew up in captivity treat people as a part of their family. As self-aware creatures, they realize their own strength and use it accordingly while interacting with humans. They often show their friendliness by gently touching people with their trunks.

The most friendly of elephants are elephant calves. Baby elephants are innocent and the least likely to cause harm to any creature on purpose. They learn behavior from their parents and family but growing up amongst humans, they also learn from them.

However, one thing one should be aware of while befriending and interacting with a baby elephant is that they are just like human babies and don’t realize their own strength yet. Considering their size, they can unintentionally harm you.

Do Elephants Bond With Humans?

It is a common occurrence with captive elephants, who learn to associate people with safety and food to form bonds with their caretakers.

Elephants are social animals, and they live in herds and take care of one another, protecting each other from danger and comforting each other. They form very deep family bonds, and once there are humans added to the equation, elephants are known to adopt them into the herd and treat them with gentle kindness.

Elephants in captivity were seen trumpeting with enthusiasm, and running, expressing their happiness at seeing “their people.” They often try and engage humans in their playtime, especially in the water, where they spray everyone just for fun.

Elephants have a very good memory, recognizing each person they interact with. They are also very sensitive and caring, ensuring that their family and friends don’t suffer. That includes humans. If you had a bad day and happen to have some elephant friends, you know you can count on them to make your day better.

Why Are Elephants Friendly?

Some people claim that saying that an elephant is friendly is not entirely correct because even captive elephants are still wild animals, not domesticated like dogs.

They abide by our wishes and let us train them only because of their docile nature. It is true, but there is more to that than just pliant nature.

All those character traits make elephants friendly, although it is always wise to consider that it is still a wild animal regardless of whether the elephant is at peace with you in the wild or captivity.

Therefore, it should be treated with respect and sensitivity.

How Can You Tell What Mood Is An Elephant?

Regardless of whether it is a wild or captive elephant, it is still an animal, and it can’t say with words if it likes us or not. It is up to us to determine how friendly an elephant is at the given moment.

Even though elephants are different species from us, it is easy enough to follow their body language to discern how friendly they feel towards us.

Once used to having people around and trusting them, elephants tend to adopt humans into their herds and treat them with the same respect and devotion as any other member.

Elephants are very complicated creatures. Their brainpower allows them to feel and express many emotions that humans attribute to themselves, showing that elephants are able to bond and form friendships not only with each other but also with other animals.

Elephants are compliant by nature. Never seeking to harm other animals on purpose, they live in a quiet social group called a herd, led by a matriarch, where everyone looks out for each other. They make friends with other species and people, forming strong bonds on many occasions.