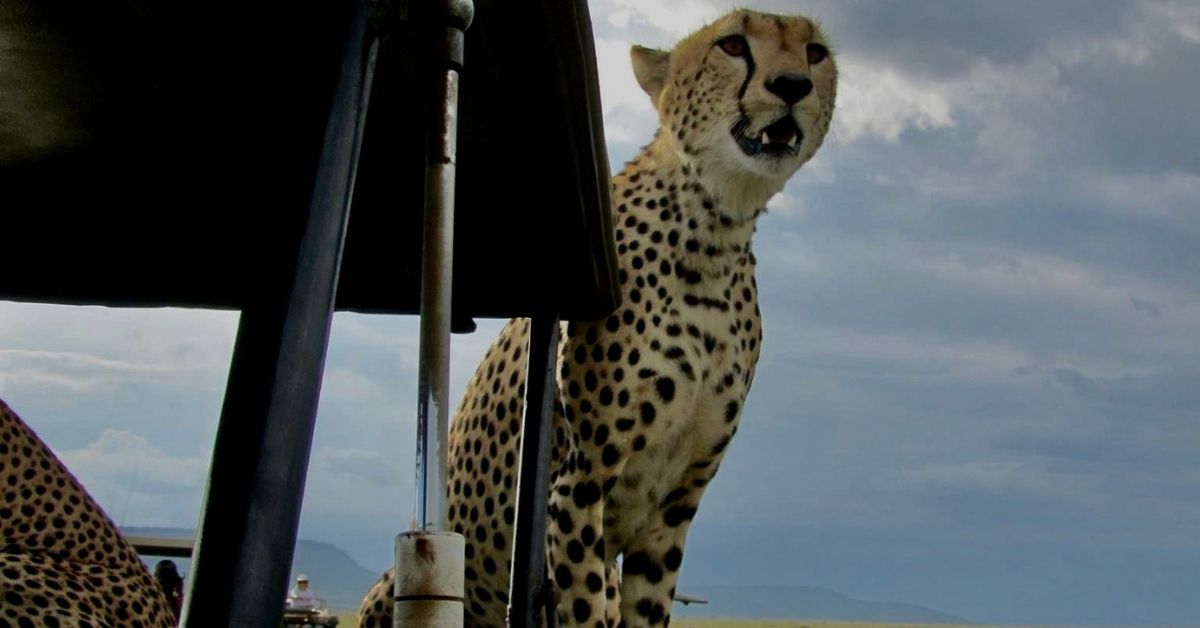 Despite its reputation as one of the most feared big cats in the wild, the cheetah possesses a tamer nature.

It has been observed to interact in a sort of playful manner with humans during safari trips. Having said this, could it be possible that one of nature’s most feared predators is just a big friendly fluffball?

Cheetahs, much like most animals, tend to keep to themselves. They may develop the need for companionship over time and interact with others of their own kind. However, they mostly avoid contact with other animals.

However, cheetahs in captivity are well documented to have friendly relations with humans and develop close bonds with them. They are likened to big dogs and can often be described as excited and playful towards humans.

However, despite their reputation as the big cat with the most docile nature, friendly still wouldn’t be the best word to describe these fearsome cats. For the most part, they tolerate the presence of humans and other animals, but they are still extremely dangerous predators.

Aside from the lion, Cheetahs are among the only big cats known to live in groups and form strong bonds with others of their kind. However, this is not always the case. Most of the time, these majestic cats still enjoy living solitary lives.

Female cheetahs are responsible for forming most “groups.” Mothers will take care of their litter and create a little mini cheetah pack until their children grow to be around two years of age. After which, these now adult cheetahs separate from their little group and begin life on their own.

Female cheetah cubs tend to live solitary lives when they come of age, avoiding interaction with other cheetahs until mating season. However, if there is more than one female cub in one litter, these sisters can sort of band together until they start their own families.

On the other hand, male cheetahs have a greater tendency to form alliances with other male cheetahs. Two or more males from the same litter can start their pack where they live, hunt, and establish territories as a group.

Solitary male cheetahs may also form their own group or join groups of related cheetahs despite not holding any existing familial bonds with the members.

Male cheetahs who choose the solitary life are often the only male cub in the litter.

Cheetah’s Relationship with Other Animals

Cheetahs aren’t the most friendly with other animals as well. The cheetah is considered an apex predator and is widely feared by a vast majority of the animals around it. They can also incite conflict with other predators.

​If animals such as gazelles, impalas, and antelopes were to sense a cheetah’s presence, they would most likely run away to avoid ending up as this predator’s next meal.

​Other, taller animals that aren’t included in the cheetah’s usual prey, such as the giraffe, may even warn other animals of the presence of this fearsome predator. This allows them to run to safety before the cheetah is given a chance to pounce.

​The cheetah also doesn’t get along well with other predators due to the predators’ territorial nature.

​Suppose more than one predator is found occupying or hunting in the same area. In that case, it immediately sets off conflict and competition between the two over space and potential prey. This issue can lead to a confrontation to establish dominance and eliminate threats to others’ security.

​The cheetahs are at a disadvantage due to their smaller size and weaker strength when it comes to this. So as not to attract attention, cheetahs may even cease their hunt altogether if they spot the presence of another predator out and about.

​Despite their general aloofness towards other animals in the wild, cheetahs in captivity have been found to bond extremely well with other animals — specifically, dogs.

​To fulfill their need for companionship, the San Diego Zoo has found great success in raising cheetah cubs with puppies.

​Their unusual pairing allows the cheetah to release nervous energy through the puppies’ playful energy. True to the trope, the dogs chase after the wild cat and excitedly engage in rough play fights with the fearsome predator giving both an outlet.

​The relationship formed between the dog and the wild cat has been described to be as strong as if they were brothers. Because of this success, many other zoos have also taken to raising cheetah cubs with puppies.

​This is also evident in the way of how dogs and cheetahs often work together when hunting with humans.

One of the most significant reasons cheetahs obtained their strong reputation for being friendly is their strong and somewhat rocky relationship with humans.

​For centuries, cheetahs have maintained a close connection with humans, spanning ancient royalty to current civilizations.

​During ancient times, cheetahs were kept as royal pets and often adorned with various ornate accessories such as leashes and collars. This association led them to become symbols of opulence and luxury.

​As a result, the wealthiest families from different places worldwide continue to keep cheetahs as pets to this day to show off their extravagance and affluence. This occurs most commonly in the United Arab Emirates.

​Cheetahs also make great hunting companions and have been used to track down, fetch, or land the final blow on various prey. Some hunters can use cheetahs alone, while others pair the wild beast with a dog or two.

​Cheetahs in captivity have also shown great affection towards their trainers and form close bonds with humans surrounding them.

​However, cheetahs kept in captivity have been shown to have shorter lifespans and difficulties in breeding.

​However, cheetahs in the wild are still extremely wary about the presence of humans and see these beings as threats and with good reason.

​Cheetah populations have suffered dramatically as a result of human actions. Cubs and adults alike are being hunted down for their coats, bones, and other trophy parts.

​The continuous demand for cheetahs as pets has also led many cheetahs to suffer and die. This happens because of the grotesque conditions involved in their transport and capture.

​Lastly, habitat reduction brought on by the continuous growth of human settlements has greatly lessened the survival rates of these wild cats due to the consequent decrease in prey and shelter.

​All of this can lead to cheetahs viewing humans as significant threats to their safety. They don’t usually strike first or are considered an active threat to human life. However, they can still attack and seriously injure humans that they feel bear intentions to cause harm to them.

Cheetahs aren’t friendly, but they aren’t actively threatening either. They are easily the most docile among all the big cats. They have the most significant potential to form strong bonds with humans and, on rare occasions, other animals.

However, let us not forget that these large cats are still one of the strongest predators out in the wild. They may tolerate us, but they can still bite back should the situation demand it.