Are Bears Related To Dogs? 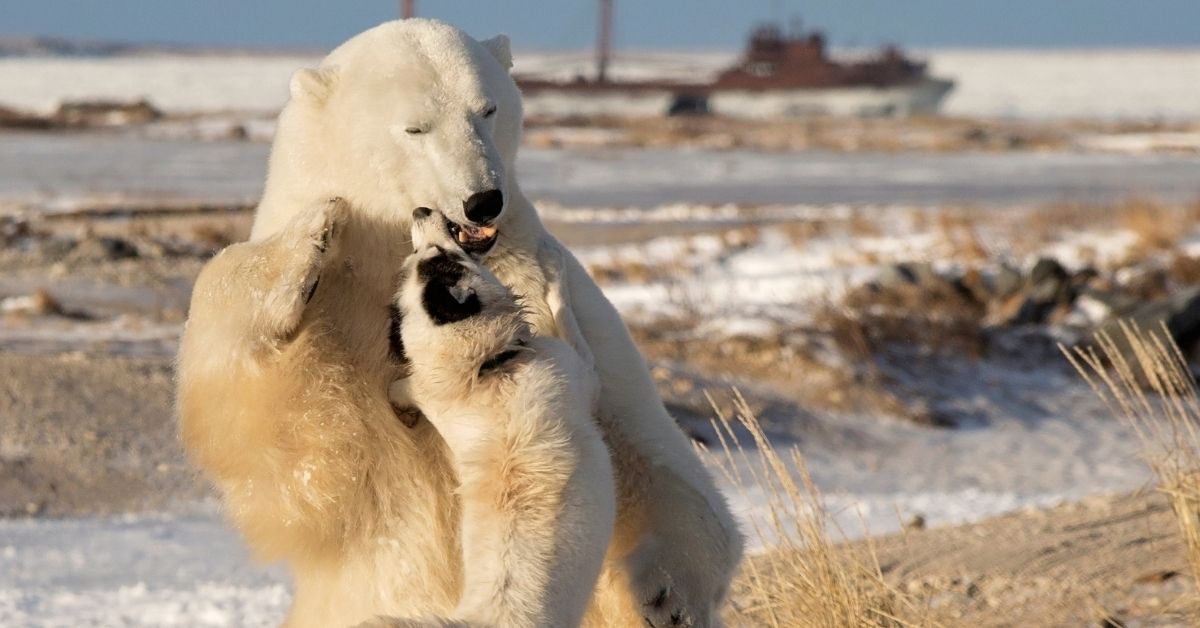 Many species from the animal kingdom share similar traits and resemble one another to a certain degree. Even though there are plenty of dog breeds, and they vary in shape and size, a few closely resemble bears in their facial expression and body build, like Newfoundlands or St Bernard dogs.

Some people may question whether it is just a coincidence or are the two species somehow related to each other. The truth is that just like cats and hyenas, dogs and bears come from the same animal that lived on earth about 55 million years ago before climate change and evolution took them on their separate roads.

Are Bears And Dogs Genetically Related?

Dogs belong to the Canine family, alongside wolves, foxes, dingoes, and coyotes, amongst others. On the other hand, bears belong to the Ursidae family, which includes brown, black, polar, and panda bears.

However, these two families have one thing in common: they both belong to the Caniformia suborder, which consists of “dog-like” carnivores.

Bears and dogs belonging to the same suborder mean they are distantly related, although not close enough to consider them genetically related.

In fact, dogs, or Canines, split from that side of the branch faster than other species in the Caniformia suborder. It means that bears are more closely related to seals, raccoons, and red pandas than dogs.

However, not being genetically related doesn’t mean they are not related at all. Everything in the world goes back to the same beginning, and even the most varied creatures are somehow related to each other.

Like humans and apes, dogs and bears are related on a certain level. It all comes down to the closest common ancestor.

Do Bears And Dogs Have A Common Ancestor?

Yes, dogs and bears have a common ancestor.

Although dogs and bears are not genetically related now, they branched out from the same animal species, called Miacids. They were small, mostly tree-dwelling weasel-like animals with long bodies and tails. They were carnivores that fed on smaller animals, although their teeth were not as developed as those of dogs and bears.

The species connecting bears and dogs lived on earth about 55 million years ago and spent their time mostly in forests.

Around 25 million years ago, when the climate started to change and dry out, the little creatures faced problems with habitat loss. That’s when evolution took matters into its hands, and dogs diverged from the main group.

They had to adapt to a different type of prey, which lived in the open plains. It explains the overall growth: longer limbs, bigger teeth, and ears, as well as speed gain and different hunting techniques.

Bears separated from the family later, and although they went through a very similar evolution, they had to adapt to slightly different habitats and prey.

The early short-faced bear, whose remains were found in North America, was twice the size of modern bears, with a lighter build, longer legs, and feet shaped for fast running.

Can Bears And Dogs Mate?

No, dogs and bears can’t mate. Those are two different species, and their difference is too significant to produce offspring.

Many people think that because animals are somewhat related, they can be crossbred together, like, for example, mix breeding tigers and lions.

However, even those animals don’t breed in the wild – the result of the crossing is a human-made hybrid. Unfortunately, that’s not the case with bears and dogs. Even in captivity, one cannot breed a dog and a bear together.

Although bears, like dogs, are caniforms, and they both share a common ancestor, they are still genetically too far apart. In fact, bears have 74 chromosomes, and dogs only have 39. For mating to be possible, the number of chromosomes needs to match. Otherwise, it is not possible to connect the sperm and egg cells to produce living offspring.

Bears and dogs resemble each other to a certain extent because they share a common ancestor and went on a similar evolutionary road after they split about 25 million years ago.

Because of the common ancestor, bears and dogs share many common traits like the elongated snout, non-retractable claws, the same number of teeth, keen sense of smell, and exceptional build are “leftovers” from evolution.

Even though dogs branched out from the main family earlier than ursids, pinnipeds, and musteloids, they faced a similar evolutionary road to bears. Both species can survive on meat and plant matter.

No, bears don’t bark like dogs. Although bears can make a bark-like sound, it is not in the same capacity as a dog’s woof.

Bears make many different sounds, from snorting, huffing, and chuffing to roaring and growling, and, yes, they also bark. However, the bear bark is a deep and throaty sound that resembles a very short growl or a quick throaty chuff than a proper dog-like bark.

Additionally, dogs are known to bark on many occasions, from nervous and agitated bark to happy and playful ones. They can also bark for hours on end. Bears, on the other hand, are not as vocal.

The most common sound a bear would make is huffing. It is the sound of a bear that goes about his life without much concern, foraging for food or traveling from one feeding spot to another. After that, the second most common sound would be a mother’s chuff used to call her cubs.

Bear bark would be considered a warning sign for another bear or other threat to stay away or a sound of an annoyed or agitated bear. As we stated before, this bark would not sound like a dog’s woof but rather like a short growl from deep inside the bear’s throat.

Dogs and bears are both carnivores, and they both belong to the same suborder Caniformia. Even though they may look similar, they are not as closely related as one may think.

They share a common ancestor that lived around 55 million years ago, but since then, both species went separate ways, and although they retained some similarities, like the number of teeth, long snout, and taste for meat, they have different numbers of chromosomes, which makes them genetically different from each other.