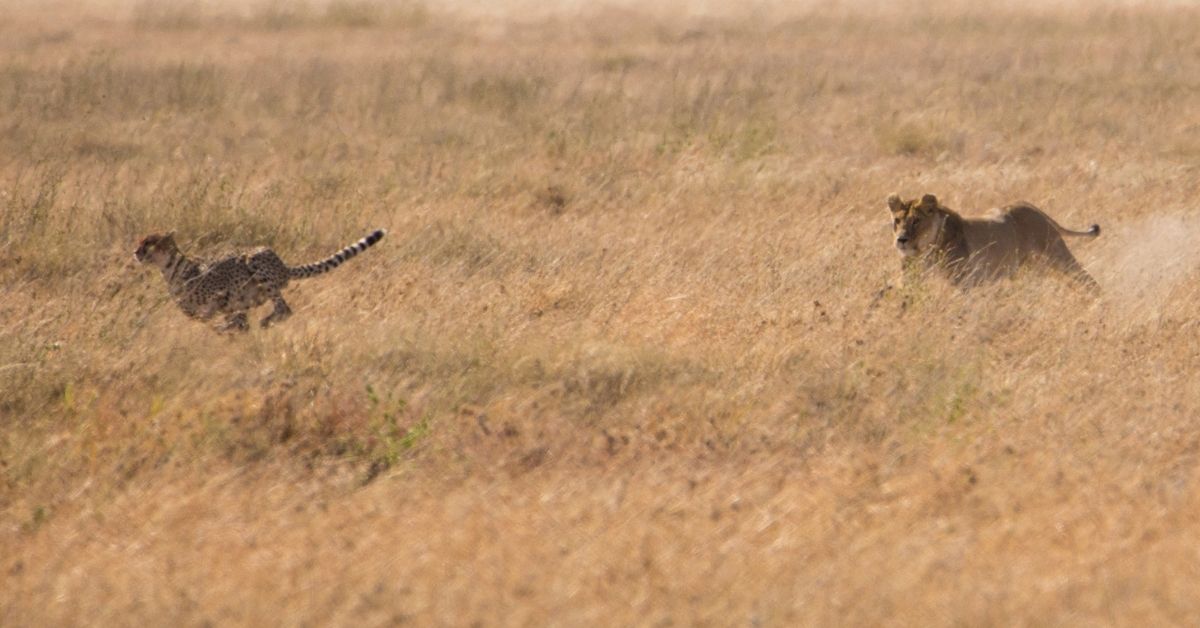 Many animals cower to safety in fear whenever the cheetah is near. This big cat’s predatory prowess and quick ways are among the most feared combinations in the wild. However, despite their status as apex predators, these large cats can still find themselves subject to other predators even stronger and more dangerous than themselves.

Do Other Animals Eat Cheetahs?

Many other animals can feast on cheetah meat, namely: lions, hyenas, and leopards. However, it doesn’t happen that often.

Cheetahs are not only strong predators. They are also swift and thus extremely hard to catch.

Though, this doesn’t mean that cheetahs are unattainable. A few exceptionally stronger predators or groups of predators have a slight advantage over the cheetah, and can still kill and consume this big cat’s flesh.

There aren’t a lot of animals who boast of being able to take down a predator as terrifying as the cheetah.

Here are some of the strong predators that can be in that unique position:

Of course, the king of beasts would be able to take down this speedy cat. They are among the most superior beings at the top of the food chain.

Lions are very well known for killing other predators, including cheetahs, who may view as threats to their dominance. However, they very rarely eat the ones they kill.

They are responsible for the deaths of full-grown adult cheetahs and a significant number of cheetah cubs.

However, if there is a lack of better prey, the starving lion can steal or scavenge the cheetah’s kills and take the other cat out for good measure. If they’re still feeling a little hungry, they may also go ahead and eat them.

Alone, hyenas tend to stay away from the much larger, stronger big cats like the cheetah. They are easily overwhelmed by the cheetah’s speed, making them extremely hard to catch for the predator hyena.

However, they can get into conflict over kills. Hyenas are exceptionally well known for their tendency to steal kills off other big cats, including the cheetah. In the process, they can cause severe harm to this fast cat.

Aside from that, packs of hyenas can also hunt and take down other predators if they lack their usual prey. They work exceptionally well as a unit and coordinate attacks to overpower and outsmart the cunning cheetah.

Once they pin the cheetah down, they bite on the large cat with such force that it causes significant injury or even breaks bones. This ultimately leads to them killing the cheetah and turning it into their next meal.

Hyenas have one of the strongest bite forces in the wild, placing them among the most feared predators in the wild. Even large cats such as the cheetah know better than to mess with these terrible biters.

The leopard can view cheetahs as a real threat over their similarities in prey. Cheetahs are incredibly great predators which can intimidate the leopard.

In the end, this can lead to the leopard eliminating the cheetah to ensure that it has enough prey to feed itself.

Leopards are also far from being selective of what they eat. If they kill cheetahs, they will most likely consume their big cat cousin to not waste a good meal.

Why Would Other Animals Eat Cheetahs?

Cheetahs are apex predators. They have the privilege of walking around their habitats without fear of being hunted in general. However, there are a couple of situations where this big cat can end up as another’s next meal.

Predators always do their best to avoid conflicts with other predators. However, the presence of more than one predator in the same area can unintentionally trigger competition between the two.

Cheetahs and other big cats are very sensitive when it comes to their territories, especially if there are limited resources.

If competition is present, it can lead to a heated confrontation that can in turn lead to the cheetah’s demise.

Some prey tends to relocate due to the changing seasons or the lack of sufficient food and resources, leaving predators to starve with very little to eat.

This can lead predators to explore cuisines out of their usual prey choice to feed themselves and nourish themselves enough to survive.

While there is an unspoken rule between predators not eating each other, all can be forgotten when one is on the brink of life and death.

Cheetahs are generally weaker and more docile than other big cats. They can be viewed as a potential substitute for prey.

Adult cheetahs don’t face much threat of being hunted by other predators. Cheetah cubs, on the other hand, are a whole different story.

Cheetah cubs are incredibly vulnerable to attacks from other predators. They are not fully developed and thus are weaker, smaller, and unable to defend themselves if separated from their mothers.

Some predators may approach these unguarded cubs to hunt and kill them to eliminate them before they grow into potential threats. These killings cause up to 90% of cheetah cub deaths.

Some predators may also resort to eating them so as not to waste good meat.

Can Cheetahs Survive Attacks From Other Predators?

The cheetah tends to go for flight rather than fight whenever faced with a real live threat. This is because they are almost always placed at a physical disadvantage in conflicts.

They are much smaller than other big cats and are not built for combat strength. Because of that, they won’t be able to fight off their attackers. However, they can sustain the fight long enough until the opportunity to escape comes to them.

So, the cheetah mostly keeps its head down and avoids confrontations with other predators to thrive and survive in the wild.

Cheetahs are mighty cats and are among the fiercest predators one can ever see in the wild. Despite this, they can still find themselves on the other end of the spectrum and hunted by stronger predators like lions, leopards, and hyenas.

Despite these threats, they are far from defenseless beings and can still hold their own and survive in the wild.